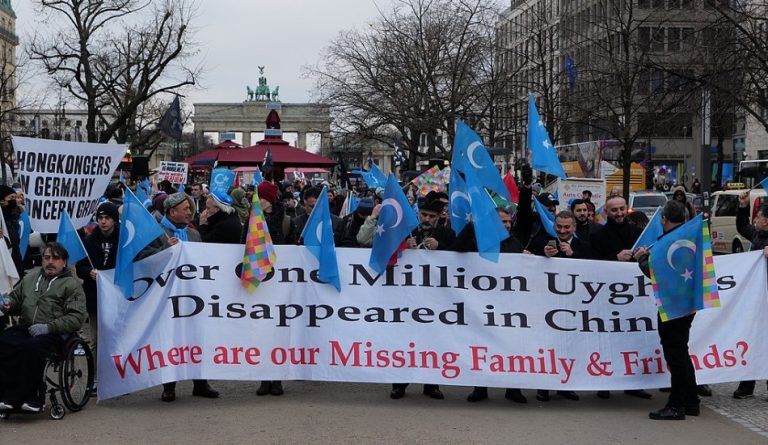 Recently, a list of Uyghurs, held as prisoners at internment camps in Xinjiang, was leaked to the media. The document not only provided information about the detained people, but also had details of their relatives, friends, and neighbors. A few references also indicated that some Uyghurs were being made to do forced labor.

Marcus Grubel, the German government’s commissioner for global religious freedom, expressed “great concern” at the revelation. “We cannot accept the forced assimilation that the Chinese government exercises on the Uighurs… People are detained for their beliefs, children are separated from their parents, and the Chinese government monitors all areas of life. Under these circumstances, a humane life can no longer take place, he said to DW.

Gyde Jensen, the chair of the human rights and humanitarian aid committee in the Bundestag, called for government intervention on the issue and asked the EU to level sanctions against China. Ulrich Delius, Director of the international NGO Society for Threatened Peoples, asked that officials identified as being responsible for the crimes against Uyghurs be barred from entering the EU. He also asked that German companies in China review their operations in Xinjiang.

In a recent report by the Australian Strategic Policy Institute (ASPI), it identified almost 27 factories in China where Uyghur detainees from the Xinjiang region have been relocated since 2017 as forced labor. The factories are linked to supply chains of at least 83 internationally reputed brands including Apple, Samsung, Volkswagen, BMW, Sony, Nike, and so on. James Leibold, an author of the report, wants companies to take steps to ensure that their supply chains have not been exposed to forced labor camps in China.

In the UK, brands like IKEA, H&M, Muji, and Uniqlo have been identified as selling merchandise that uses cotton sourced from the Xinjiang region. H&M and IKEA eventually announced that they will not be procuring cotton from Xinjiang. Rights groups wrote a letter to Britain’s customs authority, pointing out that the import of cotton from Xinjiang violated a UK law that prohibited sourcing prison-made goods.

The idea of using forced labor is not new in China. Numerous Falun Gong practitioners have been sent to such forced labor camps in the past decade, with some of them still languishing in these places. They are not only made to work in deplorable conditions with little incentives, but they also undergo torture. In some cases, organs are forcefully harvested from living practitioners’ which is a gruesome crime.

The outbreak of COVID-19 has hit the Chinese economy hard, and the Uyghurs seem to be bearing the biggest brunt of it. Several videos from Xinjiang indicate that Beijing is rounding up Uyghur youths to use them as slave labor. The Communist Party has resorted to propaganda to cover up the issue. Some of the videos released by the government show images of smiling Uyghurs going away from their homes as part of the “poverty alleviation drive.”

However, such fake claims fall apart when one considers the fact that the Chinese government has put many regions into quarantine to combat the CCP coronavirus outbreak. Alim Seytoff, a Uyghur activist, confirmed from reliable sources in the region that most of the Uyghurs shown the video were detainees from various forced labor camps.

From the perspective of the Chinese Communist Party, using Uyghurs as slave labor attains two objectives. One, it gives the government a source of cheap labor that can be utilized to reignite the depressed economy. Secondly, it brings people who Beijing sees as a “threat” under the watchful eyes of the government, which will be constantly observing them at the factories. The U.S. Senate will soon be voting on a bill that will allow the American government to sanction people seen as responsible for human rights violations in Xinjiang.