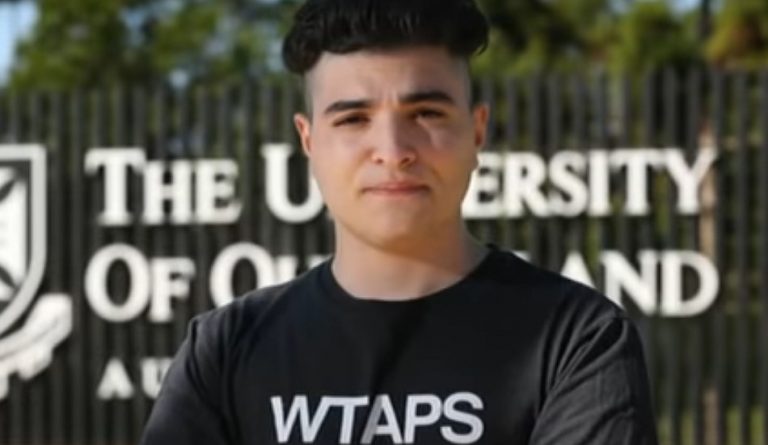 Drew Pavlou is facing potential expulsion from the University of Queensland. (Image: YouTube/Screenshot)

Drew Pavlou is a 20-year-old student from the University of Queensland who is facing expulsion from college. His crime — organizing a pro-Hong Kong rally last year and being vocal against the Chinese Communist Party (CCP).

The university has accused Pavlou of a number of policy breaches and will hold a private misconduct hearing this month. It has prepared a 186-page document outlining the charges against him. “It mixes my activism for Hong Kong, and my criticism of the CCP, with more mundane stuff… Like, for example, I used a pen in a shop at the campus, and I didn’t pay for the pen — I put it back on the shelf… I think they’ve put the dumb, small stuff there alongside it to give cover to the fact that it’s really a politically-motivated sort of thing,” he said to ABC News.

One of the allegations leveled against Pavlou is that he posed outside the university’s Confucius Institute wearing protective clothing. He was also involved in an intense online exchange with Chinese international students last year where he was called a “dog.” In return, Pavlou also used expletives in his messages. Olivia Brumm, Queensland University of Technology Student Guild President, has termed most of the charges of misconduct as “trivial.” She believes that Pavlou is being targeted because he is a “thorn in the university’s side.”

The relationship between the University of Queensland and Beijing has been heavily scrutinized in the past year or so. The Chinese Communist Party is known to have funded at least four courses in the university, including one that talks about China’s role in “human rights.” Vice-chancellor of the university Peter Hoj was previously a consultant at Hanban, the organization that funds and runs Confucius Institutes around the world.

Xu Jie, China’s Consul-General in Brisbane, was appointed as an adjunct professor at the university in 2019. Xu caused a storm when he called pro-Hong Kong supporters “anti-China separatists” while praising the activities of Chinese students at the university as “patriotic.”

With such links between the university and Beijing, it is little wonder that Pavlou is being seen as a threat. In fact, Pavlou has been seeking a “peace and good behavior order” against Xu, who had called him a separatist. The remarks were published by the Communist Party’s mouthpiece Global Times.

He has also received several death threats. One such threat even instigated that his mother was dead. Despite all these challenges, Pavlou continues to expose the Chinese Communist Party and its nefarious activities. He will be pleading “not guilty” to every charge at the hearing.

China is using its student population in Australia to put pressure on the country. After the Australian government called for an independent inquiry into the origin of the CCP coronavirus, Beijing threatened that such a move would lead to a possible boycott of Australian universities by Chinese students. Cheng Jingye, China’s ambassador to Australia, warned that Chinese parents would be infuriated with Canberra for teaming up with Washington to unleash a “political campaign” against China.

Chinese students form a major part of international student enrollments in Australian universities. If Beijing succeeds in restricting them, it will be a huge blow to the country’s economy. The outbreak of CCP coronavirus has already cut down Chinese enrollments, thereby putting several Australian universities in financial distress. Many major institutions have projected losses for the year, with most forecasts averaging around US$163 million.

If they reduce dependence on Chinese students and CCP funds, the universities can regain some of their freedoms back, and allow students and faculty to express their opinions freely on campus. After all, if one can’t be free on a university campus, that reflects poorly on the entire country.