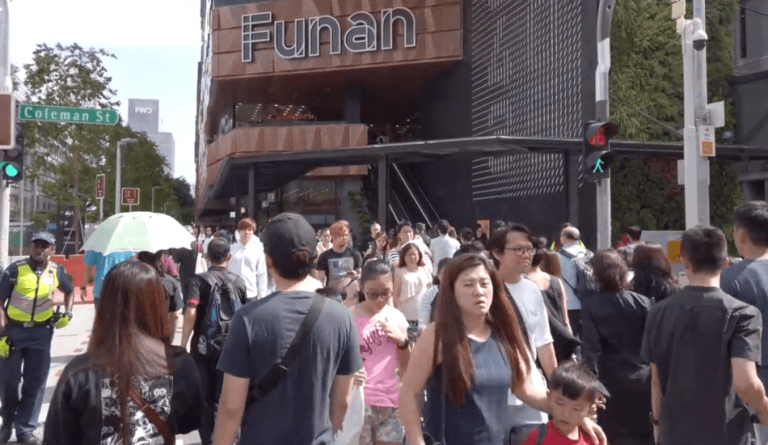 In Southeast Asia, Singapore has been the most affected by the CCP coronavirus outbreak. (Image: Screenshot / YouTube)

In Southeast Asia, Singapore is the most affected by the CCP coronavirus outbreak. The country has recorded more than 25,000 cases of infections. The lockdown and other measures have had a chilling effect on one of the most prosperous societies in the region. This can be ascertained by the fact that Singapore’s retail sales for the month of March fell by a huge margin. Singapore is also one of the regions most influenced by the Chinese Communist Party (CCP).

According to the Department of Statistics, March retail sales declined by 13.3 percent, which is the biggest since September 1998. Singapore did not enact the lockdown and other serious measures until April 7. As such, retail sales figures for April will fall even further.

The weaker sales number is inevitably due to the lower domestic consumption and tourist arrivals to the region due to the COVID-19 outbreak. According to Ms. Selena Ling, head of treasury research and strategy at OCBC Bank, retail sales will only make it back into positive territory by the fourth quarter of this year.

For 2020 overall, Ling predicts retail sales to decline by 6.6 percent. This would make the worst annual sales year for Singapore since the 2008 Financial Crisis rocked the world. “Second-quarter retail sales are likely to contract again by 15.4 percent year-on-year, before easing gradually to a more modest contraction of 4 percent in the third quarter as the lifting of the circuit breaker may see a subsequent but likely still muted resumption of economic activities and a tepid demand recovery,” she said to Channel News Asia.

The Monetary Authority of Singapore (MAS) expects the country’s economy to enter into recession this year. There is also a possibility that the growth rate could slip below the forecast range of -4 to -1 percent. This would be Singapore’s worst-ever economic contraction in recent times. Morgan Stanley believes that Singapore could be the last country in the region to return back to pre-COVID-19 GDP levels. Economist Deyi Tan predicts that export-oriented economies like Singapore might only recover by the first quarter of 2021.

Meanwhile, the government has eased some of the restrictions, but it has stipulated strict rules for businesses. Barbers and hair salons are required to install SafeEntry, a government-backed digital check-in system aimed at allowing easy contact tracing. Laundry services, restaurants, cake shops, etc., have also been allowed to operate. In March, Singapore banned the entry of short-term visitors. But now, the government is said to be talking with other countries about whether travel restrictions can be lifted with proper safeguards in place.

The Singapore government also decided that it would widen coronavirus tests to all the 323,000 migrant workers who live in cramped dormitories. The vast majority of COVID-19 infections have been reported from this segment. In April, almost 1,000 cases of infections were being reported daily from these dormitories. But in recent weeks, this number has fallen to 700. As such, a thorough testing of the migrants is expected to help the state assess the true scale of the viral threat and prepare accordingly.

Singapore has also rejected the idea of “herd immunity” as a strategy to get over the COVID-19 pandemic. According to the herd immunity theory, when most of the population in a region becomes immune to a disease, it ends up providing indirect protection to those who have not yet developed immunity. Kenneth Mak, the health ministry’s director of medical services, believes that the method is too risky for the country. Instead, Singapore is betting on containment measures to get them out of the coronavirus quagmire.