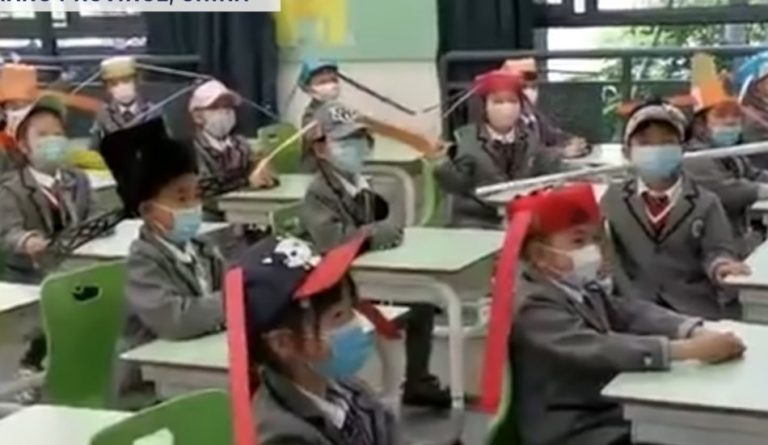 After several weeks of lockdown, schools in China are slowly reopening in some regions. To ensure that children are protected from the CCP virus, these schools have implemented a number of new measures that focus on social distancing and personal hygiene.

One school in Hangzhou has asked children to wear hats inspired by the Song Dynasty that ruled China between 960 and 1279. These hats have extensions on top that look like wings and are at least a meter in length. This creates a 1-meter buffer zone between a child and the other person when they are in a conversation.

If people are too close, say less than a meter between them, there is a risk of contracting COVID-19 from the other party. The hats prevent such possibilities. They were made by the children themselves using various materials like balloons, cardboard, and so on. In the Song period, such hats were apparently used to prevent officials from whispering during court assemblies.

The hats provide an easy way for the school to inculcate the idea of social distancing among children. “As children can see and feel these hats, and when the ‘wings’ hit one another, they may be more able to understand the expectations and remember to keep their physical distance,” Ian Lam Chun-bun, an expert in early childhood education, said to the South China Morning Post.

Almost all schools that have reopened require children to wear masks while inside the premises. Some have spaced out the seating tables in classrooms and canteens. Children also undergo a strict disinfection process before they enter the school premises during which their hands, shoes, bags, clothes, etc., are sanitized. In one school, children are required to eat at specially designated desks equipped with a foldable transparent screen. Before they start to eat lunch, the children have to disinfect the screen.

Parents are sending their children to school, trusting the words of the Chinese Communist Party that claims that it has almost succeeded in controlling the coronavirus outbreak. However, Beijing continues to silence all honest voices on the matter and is not at all transparent when it comes to real infection rates. As such, allowing children back in school under such conditions poses a serious risk to the individual and whoever they come into contact with.

In one school, administrators chose not to take a child to a doctor or notify parents after it was revealed that he was suffering from a headache. Instead, they kept the child isolated. However, the child soon died. The parents were shocked and demanded to know how this happened. They also asked that the child’s body be given to them. The administration has apparently not responded yet.

In another instance, ambulance workers in the Henan Province were seen outside a Middle school, forcefully removing four children from the premises at night. The woman who made the video narrates how frightening it is to see little kids being treated in such a manner. This is the unfortunate reality of the CCP coronavirus situation in China — even children are not spared from the iron hand of the Communist regime.

In places like Wuhan, new cases of COVID-19 are popping up. As a parent, to send their children to school in such circumstances risks the possibility of the state taking away their children. They might never even see their children again.