6 Ways Garlic Is Good for Your Health 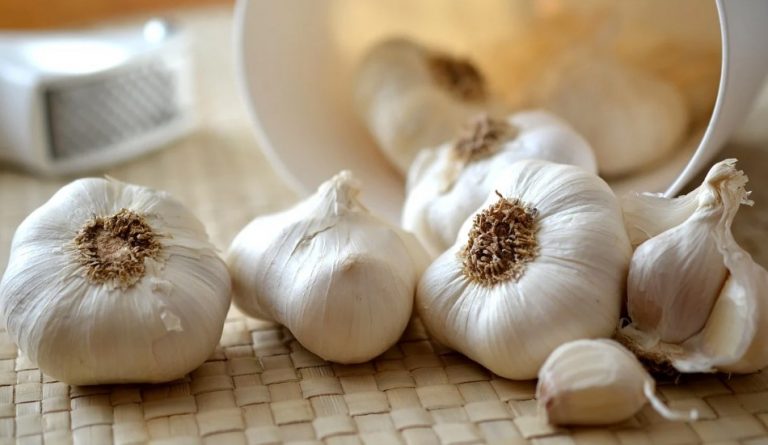 Raw garlic has traditionally been used for centuries, and laboratory evidence has shown that it has potent antiviral, antibacterial, and antifungal properties. (Image: congerdesign via Pixabay)

Garlic is a commonly used herb in cuisines. Related to onions, chives, and leeks, it is believed to be native to Siberia, from where it spread to the rest of the world about 5,000 years ago. Since ancient times, it has been identified as having medicinal properties.

6 ways garlic can benefit your health

Garlic has the ability to boost the immune system and diminish the severity as well as the length of conditions like the common cold and flu. A study in which participants took garlic supplements daily found that the incidences of colds suffered by the test subjects fell by 63 percent. Other studies show that the average period of cold symptoms was reduced to almost a day and a half from five days due to its consumption.

Garlic contains organo-sulfur compounds that are known to kill cells in glioblastoma, which is a type of brain tumor. Three pure organo-sulfur compounds have been identified — DATS, DADS, and DAS. Of these, DATS has proven to be the most effective in eliminating brain cancer cells. Studies conducted among Chinese men have discovered that those who consume at least one clove every day had a 50 percent less chance of developing prostate cancer.

Garlic can have a beneficial effect on your blood pressure levels. “Red blood cells turn the sulfur in garlic into hydrogen sulfide gas that expands our blood vessels, making it easier to regulate blood pressure,” according to the Cleveland Clinic. A study that compared aged garlic with the drug Atenolol found that the two were equally effective in decreasing blood pressure during a 24-week period. To get these benefits, it is estimated that a person will have to eat four cloves per day.

A compound in garlic, diallyl sulfide, was identified as being 100 times more effective than two popular antibiotics when it came to fighting the bacterium Campylobacter, which is responsible for most intestinal infection cases. Studies on garlic oil have also shown it to be very effective as an anti-inflammatory agent. As such, if you ever feel discomfort from inflamed muscles or joints, rubbing in some of the oil can provide some relief.

Research on women whose diets included a substantial percentage of allium vegetables found that they had lower levels of osteoarthritis. Garlic is considered one of the allium vegetables. The compounds existing in it can potentially be developed for treating the condition.

Women who ate it regularly also had decreased signs of developing early osteoarthritis in the hip joints. It increases the estrogen level in females, thereby cutting down bone loss. As such, women who are worried about their bone health post-menopause would do well to make it a part of their daily diet.

If you are worried about acne, garlic can help. The herb has strong antibacterial, antifungal, and antioxidant properties that can work together to clear your skin from acne. All you need to do is to crush some and rub it over your acne. This will kill the bacteria and eventually smooth out the bumps on your skin.

However, remember not to go overboard with this in case you have sensitive skin. Using garlic extracts on the skin might also help in diminishing the signs of aging thanks to increasing the longevity of the skin cells.