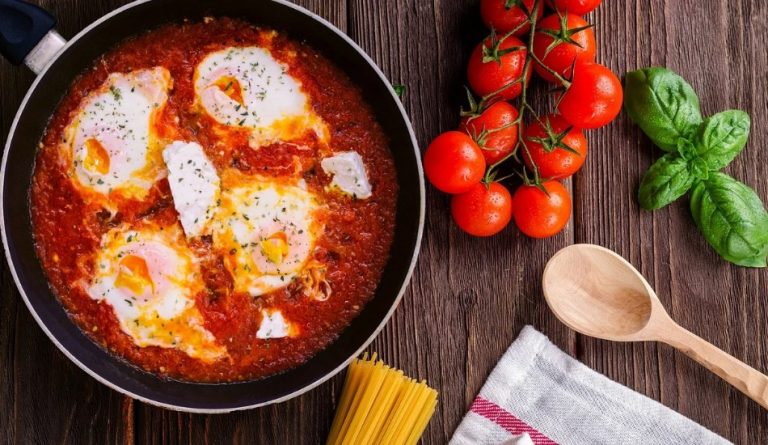 Shakshuka is a popular dish from the Middle East. (Image: Pixabay / CC0 1.0)

Shakshuka is a popular Middle Eastern and North African dish featuring eggs and tomatoes. The dish is traditionally eaten as breakfast in the Mediterranean. The word Shakshuka comes from one of the Berber languages, meaning “a mixture.”

The origin of Shakshuka is highly disputed. Some believe that it came from Morocco in Africa. Others propose that it originated in the Middle East and then spread to Spain through Ottoman Turkey. During the Jewish exodus between 1948 and 1980, when almost 850,000 Jews moved from Arab and Islamic countries, the cuisine was brought to Israel by Tunisian Jews where it’s a national dish.

In the Italian city of Naples, a variation of the Shakshuka is called “Uova in Purgatorio,” translated as “Eggs in Purgatory.” The eggs are seen as souls seeking purification, while the sauce as flames of the purgatory. There is a dish similar to Shakshuka in China that features stir-fried tomatoes together with scrambled eggs.

Shakshuka has excellent nutritional value. “It’s a great protein-packed breakfast that has benefits not only from the nutrition in the eggs but from the tomatoes as well… tomatoes are a good source of lycopene, an antioxidant that helps to protect cells from damage and that has been associated with promoting heart health,” Maggie Michalczyk, a dietician, says to Live Strong.

The high protein content of Shakshuka makes you feel full all through the day, which can eventually help in your weight-loss regimen. The high water content also contributes to the feeling of satiety. Virgin oil, pepper, garlic, and tomatoes feed your body with minerals, vitamins, and phytonutrients.

First, heat up the oil on a skillet at medium-high heat. Add in the onion and chilies. Cook until the onions become golden brown and soft. This should take about 6 minutes. Next, add the garlic, paprika, and cumin. Keep stirring for 2 more minutes; the garlic should be soft by now. In a bowl, put the tomatoes and crush them with hands. Mix the crushed tomatoes into the skillet. Pour ½ cup water and keep stirring occasionally at medium heat. After about 15 minutes, add salt according to your preference.

Once done, make six small wells in the mixture and crack one egg into each well. After cooking for a few minutes, the whites will set and the yolks will look runny. Sprinkle some feta and parsley over the dish and turn off the heat. Your yummy Shakshuka is now ready to eat. The recipe should be enough for 4 to 6 people.

You should ideally serve Shakshuka with pita bread and some avocado. If you cannot get these, look for toasted sourdough bread. Some people tend to use a cast iron pan to cook Shakshuka. Since tomatoes are acidic in nature, they can end up eroding the seasoning and dull the dish. In fact, the Shakshuka might even end up having a metallic taste. To avoid this, it is better to cook Shakshuka in a stainless steel pan.