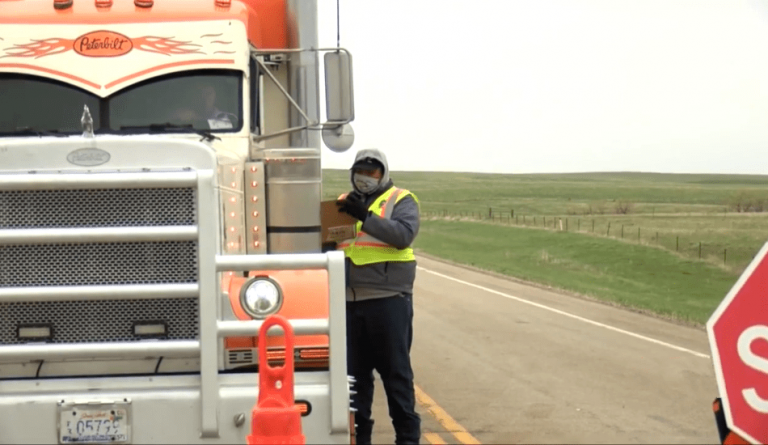 The Sioux tribe from South Dakota has installed coronavirus checkpoints on highways that run through their reservation. (Image: Screenshot / YouTube)

The Sioux tribe from South Dakota is at conflict with Governor Kristi Noem due to a dispute regarding CCP coronavirus checkpoints. The tribe has installed the checkpoints on highways that run through their reservation and has refused the governor’s calls to remove them.

The conflict between the governor and the Sioux tribe

Noem had initially sent letters to the president of the Oglala Sioux Tribe and the Chairman of the Cheyenne River Sioux Tribe to get rid of the checkpoints, citing that they were illegal. The governor warned that she would take them to court should the tribes fail to remove them. However, the Sioux tribe rejected her demand, arguing that the reservation is a region in which they legally have full control.

The Cheyenne River Reservation is home to almost 12,000 residents and spans an area of over 4,267 square miles. South Dakota highways 20, 63, and 65, as well as U.S. Highway 212, pass through the region. Though the state of South Dakota did not restrict people to their homes, the two tribes have issued strict stay-at-home instructions to people living on the reservation.

As part of the quarantining procedure, they are blocking vehicles into the region. Non-residents are only allowed to enter for essential business, and only if they are granted permission from tribe officials.

Residents can only go out to non-hot spot areas to buy essentials not available on the reservation. Residents who visit hot spots will have to self-quarantine for a period of 2 weeks once they come back. Harold Frazier, chairman of the Cheyenne River Sioux Tribe, pointed out that the tribes lacked proper medical resources and facilities to deal with COVID-19 cases.

As such, the only way to protect members is to quarantine everyone and block outsiders from entering. He asked that vehicles pick an alternate route that goes around their land. He declined Noem’s demand and reminded her that the checkpoints were in place to “save lives rather than save face.”

Noem cited a memo issued by the Department of Interior’s Bureau of Indian Affairs in April that stated tribes in the country should sign an agreement with the American government prior to restricting travel on national highways. Later on, Noem seemed to offer a compromise by allowing checkpoints on tribal roads and demanding that national highways be exempted from such checkpoints.

But the tribes have yet to accept the request. Frazier reiterated that the reservation was ill-equipped to face the coronavirus outbreak. Travelers are “coming from hot spots with no reason to be here — doing non-essential travel… The nearest health care, critical care is three hours away from where we live,” Frazier said, as reported by CNN.

Native American tribes are among the most affected groups of people in the U.S. from the CCP coronavirus outbreak. Since COVID-19 affects elderly people the most, the Sioux tribe is especially concerned for elders who are the keepers of the tribal heritage, culture, and knowledge.

Most tribe members are poor and live in conditions where proper running water, reliable electricity, medical infrastructure, etc., are not available. They largely live in cramped conditions, which makes things like social distancing tough to follow. The lack of running water even makes regular hand washing hard to practice.

Casinos are one of the mainstays of income for many tribe members. The CCP coronavirus lockdown has shut down casinos and pushed several people into unemployment and extreme poverty. In Michigan, the shutdown of a casino owned by the Keweenaw Bay Indian Community is resulting in monthly losses amounting to US$2 million. As a consequence, fewer tribe members are receiving basic healthcare. Officials even had to cancel daily lunches for tribal elders.