The Danger of a Chinese World Order 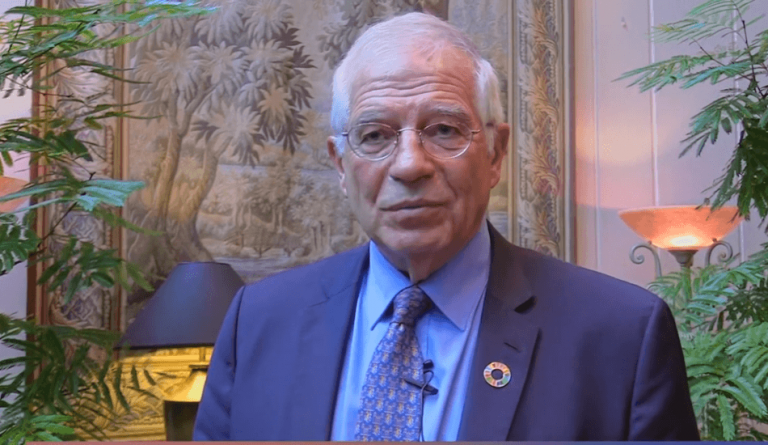 Josep Borrell, the EU foreign affairs chief, believes that Europe has been naïve when it comes to dealing with China and its push toward a new world order. (Image: Screenshot / YouTube)

Josep Borrell, the EU foreign affairs chief, believes that Europe has been naïve when it comes to dealing with China and its push toward a new world order. However, he states that the organization is slowly becoming more realistic about the relationship. Borrell made these comments during an interview with a local French journal.

The EU official noted that China is as much a trade partner to the region as it is a rival since Beijing seeks to establish a new governance model that is contradictory to European standards.

“We Europeans support effective multilateralism with the United Nations at the centre… China, on the other hand, has a selective multilateralism that wants, and is based on, a different understanding of the international order… We have to see what is behind the word,” Borell said, as reported by Politico. He states that the ongoing COVID-19 outbreak has deepened the rivalry between China and the United States.

Billionaire investor Ray Dalio foresees the CCP coronavirus triggering a massive change in the global order, with China rising as the dominant power. Dalio is the co-chairman of Bridgewater Associates, which is the biggest hedge fund in the world. He believes that the current situation is similar to the time period between 1930 and 1945. Just like those times, governments and central banks are currently trying to fill their balance sheets and create income with newly minted money.

He predicts that there will be clashes in pursuit of wealth and power, especially in the U.S. and China. The billionaire sees a huge debate sparking between socialist and capitalist ideals, eventually ending in a forced redistribution of wealth akin to what happened in the 1930s. Once the new world order sets in, he expects the U.S. living standards to rise slower than China. Dalio also warned that if the two countries approach their disagreements in a bad way, both will end up suffering.

Senator Josh Hawley, whom some people see as a potential presidential candidate for the 2024 elections, warns that the rise of China will chip away at America’s interests. He is apprehensive that the U.S. might be doomed to second place, subservient to an imperialist China. The lawmaker believes that admitting China into the World Trade Organization in 2001 was a major mistake and has introduced resolutions to pull America out of the WTO agreements.

The future global order will likely be determined by how secure the global economy is. If growth rates are steady and people are prosperous, America’s clout will remain strong on the international stage.

However, if the economy is wavering and most people struggle with their finances, China might utilize the opportunity to flip the global order in its favor by promising a revolution that will give people “equality.” While history is proof that communism only ends up destroying societies, chances of some sections of the population promoting it in deluded hopes of a “better world” are always high.

To pull off a global world order that is dominated by China, Beijing will first have to maintain its economic might. As of now, the Chinese government is desperately struggling with its economy. Recently, Beijing avoided setting a growth rate target for the year. This is an unprecedented event, since the Chinese government has published economic targets on an annual basis ever since 1990. Abandoning the practice now is a clear signal that the regime realizes that the country’s economy will be in tatters for the rest of the year.

In the long term, China’s economy should recover just as those of other nations do. However, whether it can keep its massive export revenues is doubtful. The majority of China’s exports are aimed at the EU, U.S., Japan, and South Korea. If these four democratic powers decide to prioritize imports from countries other than China, Beijing will take a huge hit economically.

In fact, Japan has already announced support for Japanese companies who wish to move manufacturing out of China. Hundreds of American firms are considering shifting to India. Once China’s export might is curtailed, dealing with the communist regime’s plans for a new world order will be easier.