The Fine Art of Olympic Fencing 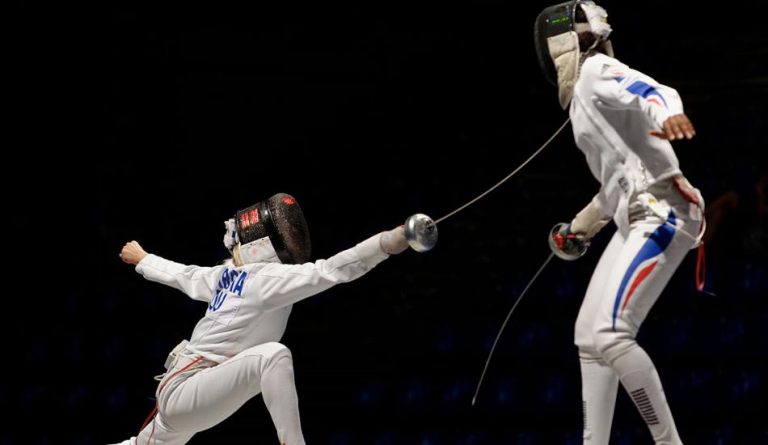 Fencing is based on traditional European swordsmanship. (Image: Marie-Lan Nguyen via Wikimedia CC BY 3.0)

Fencing is based on traditional European swordsmanship and came into existence at the end of the 19th century. The Italians modified classical fencing while the French refined it further to create modern fencing. The sport uses three weapons — foil, épée, and saber.

The foil weighs a maximum of 500 grams (1.10 pounds) and is mainly used as a thrusting weapon. It is aimed at the target’s torso. Arms and legs are avoided. The épée is also a thrusting weapon but is a bit heavier and has a maximum weight of 775 grams (1.70 pounds). The entire body of the other party is a target when using épée.

The saber is the newest weapon in fencing and can weigh up to 500 grams (1.10 pounds). It is a thrusting and cutting weapon that targets the entire body above the waist except for the hand the opponent uses to hold their weapon.

A fencing contest is held on a strip called the piste, which measures 14 meters (45.93 feet) in length and 2 meters (6.56 feet) wide. The piste has on-guard lines, 2nd warning lines, limit lines, and run-off zones located in the back of both sides. When a game begins, the contestants stand on the on-guard lines. The goal of fencing is to hit your target while avoiding getting hit.

“Electrical scoring machines are used. When target areas are hit, green and/or red lamps are lit, referring to the fencer on the right or left side of the piste. In foil, if a hit lands “off-target” (not on the valid torso area), a white light indicates the invalid touch,” according to the Tokyo 2020 website.

Right of way and penalties

What if both competitors hit each other at the same time? In such a situation, the “right of way” rule applies. Put simply, the person who was in an attacking position first, who controls the initiative of the bout, or the one who fights aggressively is awarded the points. In épée competitions, the “right of way” rule is inapplicable. Just as with any other game, there are things a player is not allowed to do during fights, failing which he will be subjected to penalties.

For one, a player cannot step out of the piste during a fight. You are also prohibited from turning your back on the opponent. Players are banned from using their non-playing hand. When the referee shows a yellow card, it means that the player has been issued a warning. A red card means that the opponent of the player who broke the rule will be awarded a point. When a black card is shown, the player is disqualified and the opponent will be considered the winner.

Fencing competitions are held as individual and team matches. Individual matches are held in three sets of three minutes each. The person who scores 15 points first or has the highest score after the three sets is deemed the winner. In a team competition, each team will have three fencers and each fencer is to fight against the opposing three fencers individually. The competition has nine sets of three minutes each, where the team that collects the highest score is crowned the winner.

Sometimes, both players might hold off from attacking each other for an extended period of time. In such situations, a referee will declare the end of the period by citing “non-combativeness” and a new period will start. This is a strategic move that is done to force the participants to attack each other more aggressively in the next period. Players who are down on points will feel as if they need to notch up their aggressiveness, thereby making the game even more exciting for the viewers.