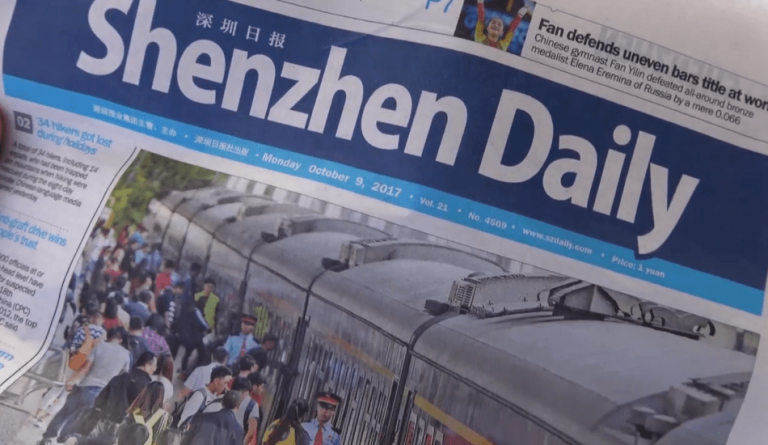 Newspapers in China are subject to a strict censorship policy that is completely contradictory to the West’s support for individual liberty and freedom of the press. (Image: Screenshot via YouTube)

The fact that the Chinese Communist Party (CCP) has implemented a strict censorship policy in the country is a well-known truth. Chinese censorship aims to restrict any independent opinion, which is completely contradictory to the West’s support for individual liberty and freedom of the press.

The only voice allowed in China is what the communist regime approves or is willing to tolerate. And now it seems as if the European Union has turned its back on the ideals of freedom since they have publicly indicated that China has the right to censor any content published domestically.

Twenty-seven ambassadors of the European Union recently wrote a letter that referenced the origin of the CCP coronavirus, pinpointing China as the source. When Beijing’s state-backed China Daily published the letter to mark the 45th anniversary of EU-China ties, people soon noticed that it had been edited.

The original letter mentioned that the outbreak of the CCP coronavirus “in China, and its subsequent spread to the rest of the world over the past three months, has meant that our pre-existing plans have been side-tracked.” But when Chinese state media published the letter, this sentence was removed.

Surprisingly, the EU did not raise the issue as a concern. In contrast, they seemed to accept it. Virginie Battu-Henriksson, an EU foreign affairs spokesperson, remarked that even though the letter was censored, the fact that it was published means that key issues like human rights, climate change, pandemic response, etc., were conveyed to the Chinese people.

“The EU delegation decided nevertheless to proceed with the publication of the op-ed with considerable reluctance as it was considered important to communicate on key EU policies,” the European Commission said, as reported by Reuters.

Cédric Alviani, head of Reporters Without Borders (RSF) East Asia bureau, pointed out that the incident shows how China takes advantage of democratic media systems to get its point across while using state media to mislead people.

He remarked that democracies across the world should resist such policies and that independent media must never be compared to Chinese propaganda media since the former had a deep respect for journalistic ethics. Hong Kong columnist Michael Chugani called China the global king when it comes to abusing free market rules.

As an example, Chugani cites Beijing’s decision to ban salmon from Norway after the country gave the 2010 Nobel Peace Prize to human rights activist Liu Xiaobo. Such abuse is also practiced when it comes to the idea of press freedom, he warned. Norbert Röttgen, a German conservative politician, said that he was shocked after learning that the EU allowed the letter to be censored. He reminded people that it is important to speak with one voice and that the EU’s opinions had to reflect its interests and values.

The Trump administration has announced visa restrictions on Chinese journalists who work in the U.S. Such journalists who work for non-American media outlets will only be given work visas valid for 90 days. Previously, the journalists were given access to open-ended, single-entry visas. As such, reducing the visa period to just about 3 months shows how serious Washington is about fighting Chinese media influence.

U.S. officials stated that the new rules were necessary to counterbalance China’s suppression of independent journalism in their country. In March, Beijing expelled the majority of American journalists working for outlets like The Washington Post, The New York Times, and The Wall Street Journal. China has also cut down on the duration of visas, limiting them from one year to just six months.