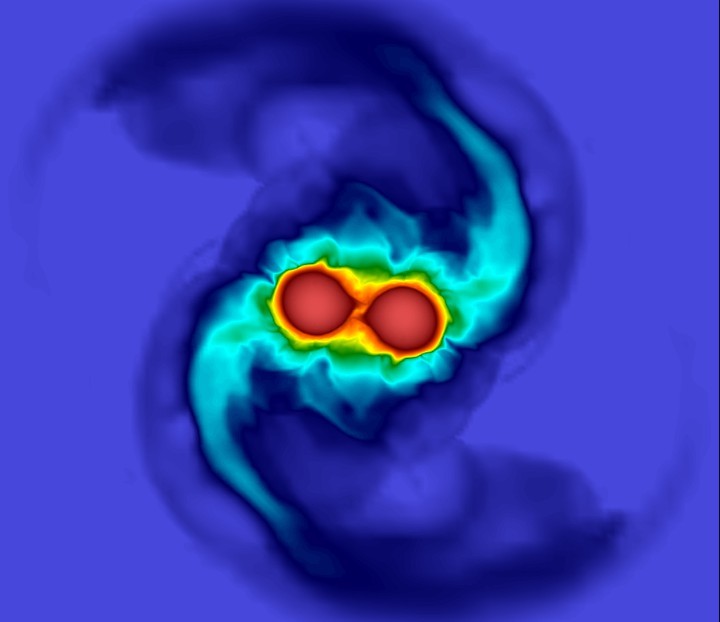 The results from a numerical relativity simulation of two merging neutron stars similar to GW170817. (Image: University of Birmingham)

Gravitational-wave researchers at the University of Birmingham have developed a new model that promises to yield fresh insights into the structure and composition of neutron stars. The model shows that vibrations, or oscillations, inside the stars can be directly measured from the gravitational-wave signal alone. This is because neutron stars will become deformed under the influence of tidal forces, causing them to oscillate at characteristic frequencies, and these encode unique information about the star in the gravitational-wave signal.

This makes asteroseismology — the study of stellar oscillations — with gravitational waves from colliding neutron stars a promising new tool to probe the elusive nature of extremely dense nuclear matter. Neutron stars are the ultradense remnants of collapsed massive stars. They have been observed in the thousands in the electromagnetic spectrum and yet little is known about their nature. Unique information can be gleaned by measuring the gravitational waves emitted when two neutron stars meet and form a binary system.

First predicted by Albert Einstein, these ripples in spacetime were first detected by the Advanced Laser Interferometer Gravitational Wave Observatory (LIGO) in 2015. By utilizing the gravitational wave signal to measure the oscillations of the neutron stars, researchers will be able to discover new insights into the interior of these stars. The study is published in Nature Communications. Dr. Geraint Pratten, of the University of Birmingham’s Gravitational Wave Institute and lead author of the study, explained:

“The tidal forces acting on the neutron stars excite oscillations inside the star giving us insight into their internal structure. By measuring these oscillations from the gravitational-wave signal, we can extract information about the fundamental nature and composition of these mysterious objects that would otherwise be inaccessible.”

The model developed by the team enables the frequency of these oscillations to be determined directly from gravitational-wave measurements for the first time. The researchers used their model on the first observed gravitational-wave signal from a binary neutron star merger — GW170817. Co-lead author Dr. Patricia Schmidt added:

“Almost three years after the first gravitational-waves from a binary neutron star were observed, we are still finding new ways to extract more information about them from the signals. The more information we can gather by developing ever more sophisticated theoretical models, the closer we will get to revealing the true nature of neutron stars.”

Next-generation gravitational wave observatories planned for the 2030s will be capable of detecting far more binary neutron stars and observing them in much greater detail than is currently possible. The model produced by the Birmingham team will make a significant contribution to this science. Dr. Pratten said:

“The information from this initial event was limited as there was quite a lot of background noise that made the signal difficult to isolate. With more sophisticated instruments we can measure the frequencies of these oscillations much more precisely and this should start to yield some really interesting insights.”

Provided by: University of Birmingham [Note: Materials may be edited for content and length.]