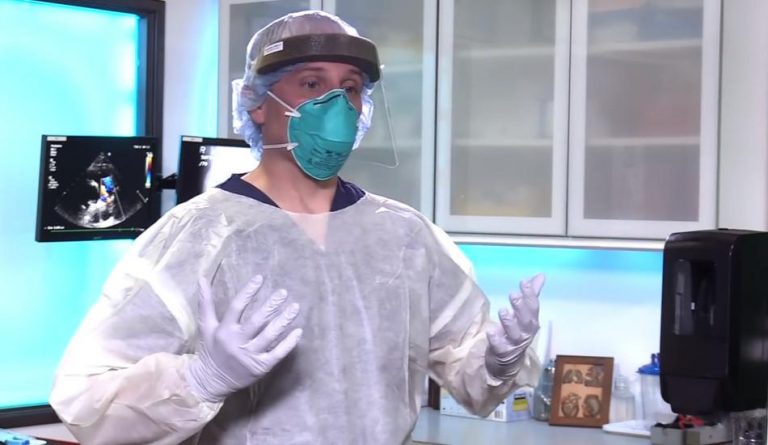 While healthcare workers in the U.S. put their lives on the line treating COVID-19 patients, many of them are at risk from counterfeit masks. (Image: Screenshot / YouTube)

While healthcare workers in the United States are putting their lives on the line treating COVID-19 patients, the unfortunate fact is that many of them are forced to wear counterfeit masks from China that offer little to no protection against the CCP coronavirus. Since the pandemic began, the Immigration and Customs Enforcement’s Homeland Security Investigations department has made 11 arrests and 519 seizures related to counterfeit medical supplies.

One shipment of counterfeit masks was discovered in a warehouse in southern California that came with the name of “Shanghai Dasheng.” The N95 masks in the warehouse had fake stamps aimed at misleading buyers into thinking they were approved by the U.S. National Institute for Occupational Safety and Health (NIOSH).

This specific approval indicates that the product is safe for use by healthcare employees. However, the U.S. Centers for Disease Control had already issued a warning that all N95 masks with ear loops that bore the name of Shanghai Dasheng were counterfeit.

“Ear loop masks are less expensive to manufacture because the straps are attached with glue to the face covering, while headbands on genuine N95s, also called respirators, must be stitched, stapled or soldered to establish a tighter seal over the nose and mouth… And even if the electrocharged fibers in the fabric are the same, masks with ear loops are not as effective because tiny airborne droplets carrying the virus can get sucked through the cracks,” according to AP News.

In March, it was reported that Valpro Ranger 821 and 821V masks were being promoted through websites as having been certified “N95” by NIOSH. However, the CDC later confirmed that the products were counterfeit and had fake approval numbers that were actually assigned to 3M. These products were soon removed from e-commerce websites.

A recent NIOSH test on 67 N95 masks imported by the U.S. revealed that almost 60 percent of them failed to meet the standard of blocking 95 percent of particles. A KN95 mask, which is the Chinese equivalent of the N95 standard, was only able to filter out 50 percent of the particles, while another one in the same shipment filtered only 35 percent. An unauthorized FDA logo was also found on some of the masks.

A test by the FDA found that one of the shipments of Chinese KN95 masks only blocked 1 percent of particles, which essentially means that they were of absolutely no use. Concerned about the proliferation of fake, substandard products, the U.S. administration has banned 66 Chinese companies from selling medical face masks. With this, only 14 Chinese companies now have the authorization to supply masks to U.S. medical workers.

The United States government will soon be invoking a law that will shield firms from antitrust regulations so that they can keep supplying medical equipment without restrictions. The administration is apparently involved in discussions with private sector businesses for a 5-year agreement on supplying medical devices, protective materials, vaccines, and medications. The agreement involves a provision of the Defense Production Act that will allow companies to discuss the supply and price of products without breaking antitrust laws.

Antitrust regulations were originally aimed at protecting customers from predatory business practices. Under normal circumstances, companies and governments deciding the market price of a product would be an act that breaks antitrust laws since it potentially involves price manipulation. But in the current circumstances where the U.S. is facing a shortage of medical supplies to counter the threat of COVID-19, such regulations can be overlooked for the public good.