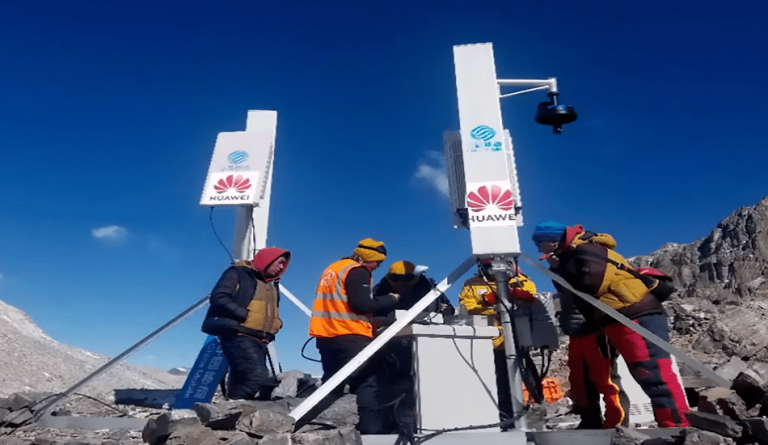 Chinese company Huawei recently installed a 5G tower on Mt. Everest. At 21,325 feet, the tower is said to be the highest 5G antenna installation in the world.

The 5G tower components were transported to the top by yaks. These animals are traditionally used for transporting goods in the region since they are considered excellent at high elevations thanks to their large heart, lungs, several layers of fat, and thick fur. The 5G equipment weighed 8 tons in total.

The installation project was completed through Huawei’s partnership with China Mobile Hong Kong (CMHK). “Three 5G base stations have been built at Everest Base Camp at an altitude of 5,300 meters [17,388 feet], and a transition camp at 5,800 meters [19,028 feet]. A further two stations have now been installed at the 6,500-meter-high elevation camp [21,325 feet], so the signal will be able to cover the summit of Mount Everest. About 25 km [15.5 miles] of fibre optic cables were laid as part of the project,” according to The Sun.

Over 150 employees were involved in the project that also included upgrading a transmission trunk line and route stretching 110 miles. Both companies also plan to use 5G technology to map the height of the mountain more accurately. For users of the 5G service, they will now be able to enjoy live video broadcasts even at 8K resolution. The tech should also help scientists, mountaineers, and other experts who work in the region. 5G speeds will apparently allow users to download a 1GB file in as little as 1-3 seconds.

While the wide deployment of 5G will undoubtedly bring advantages to mobile users, the tech also raises privacy concerns given that China is being ruled by a communist government. Mount Everest is located in the Tibetan region, a place that Beijing sees as plagued by “separatism.” One part of the mountain is in Nepal, while the other is in Tibet.

The government has constantly cracked down on Buddhist believers and maintains strict control over the education and culture of the people. 5G speeds will enable the Chinese Communist Party to expand its video, audio, and biometric surveillance of the people, restricting and micromanaging their lives even further.

China has already deployed over 160,000 5G base stations across 50 cities, which is one of the widest areas of 5G coverage in the world. By 2025, China is expected to account for almost 600 million 5G users, which will be about 40 percent of the world’s total 5G subscribers. Having such a huge chunk of 5G users will benefit the Chinese tech industry as they will be able to test and launch new applications that use this technology faster than other nations.

A provision has been suggested to the U.S. National Defense Authorization Act that calls for blocking the stationing of new aircraft at military bases in countries that use risky vendors for its 5G or 6G communication networks. If the suggestion does end up as a law, it will block Washington’s proposed plan of stationing two U.S. squadrons of F-35A Lightning II aircraft in the UK in 2021 since Britain has been positive toward Huawei’s 5G proposals.

Some experts believe that such a move might just push Britain to pivot to America’s side because London would likely prefer not to squander its relationship with the U.S. given the Brexit situation.

Earlier, the Trump administration warned allies that America would limit intelligence sharing if they end up using Huawei equipment for 5G networks. Since Huawei is deeply linked to the Chinese government, using their network risks the possibility of intelligence secrets being leaked. Britain initially allowed Huawei limited involvement in its 5G infrastructure but the UK parliament recently reversed course on that decision.