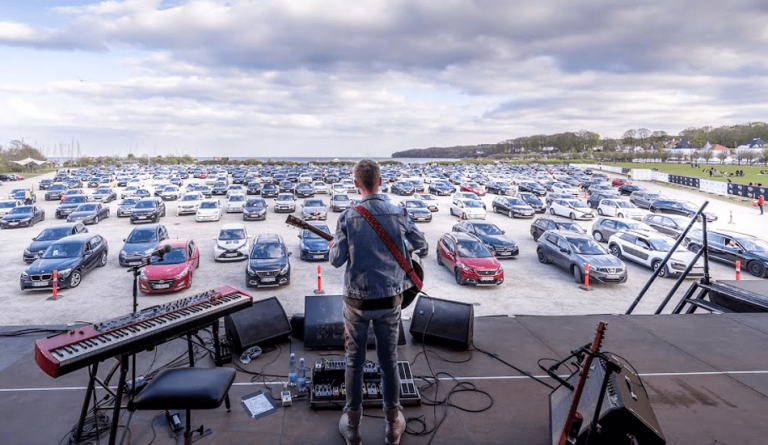 Danish singer Mads Langer recently came up with a unique concept to deal with cancellations of live performances — a drive-in concert. (Image: Screenshot via YouTube)

Musicians have been one of the hardest-hit groups due to the CCP coronavirus outbreak. Most live performances have been canceled, leaving many musicians with little to no income. To overcome this problem, Danish singer Mads Langer recently came up with a unique concept — a drive-in concert.

After more than 40 European summer festivals were canceled, Langer was starting to get nervous about his finances. His first thought was to do a livestream or even conduct an online broadcast of a live event. However, Langer realized that this might not net him the success he was looking for. After discussing with some of his friends, Langer decided that a drive-in concert might be a viable idea.

As soon as the event was announced, more than 500 tickets were sold in just minutes. After six days, the concert was held at a venue in the coastal town of Aarhus. Cars streamed into the venue and people stayed inside the vehicles. Fans cheered by turning the windshield wipers on and by honking their horns. On the stage, Langer blasted out his top hits.

He also interacted with the audience, with people telling the singer how his songs had played a role in their romantic life and so on. Langer even invited a fan on stage to dance as he performed his hit Fact-Fiction. The local police were happy since most visitors followed the COVID-19 restrictions by staying inside their cars. When the performance was finished, the cars all left the place within 30 minutes.

The success of the concert has inspired Langer and his organizers to hold more such concerts in the near future. “I’m very much looking forward to playing normal concerts again, hug my audience and be closer to them once I’m allowed to. But in the meanwhile, I definitely think the drive-in concept is worth exploring… I also think that is why it went viral. It really was something you haven’t seen before,” Langer said to ABC News.

It is highly possible that other musicians around the world will also eventually hold drive-in concerts until the COVID-19 scare wears off. Since the event is certain to follow social distancing and other policies, the government is less likely to place a ban on such gatherings. This would be a win-win for the performers, the people, and the government.

The cancellation of summer festivals has resulted in massive losses for the concert industry. The Fringe Festival in Edinburg, Scotland, is one of the biggest annual events in the city, bringing in about US$243 million in revenue.

The cancellations this year have put the festival budget in a deficit and negatively impacted the economy of the town. In the town of Idanha-a-Nova in Portugal, the Boom Festival is a regular annual feature. In 2018, the festival had the effect of adding US$61 million to the economy of Portugal. But this year, the festivities won’t be held.

In the UK, the Association of Independent Festivals (AIF) has warned that the country’s independent festival sector is at risk of collapse. AIF represents 65 major festivals in the nation. According to the organization, almost 92 percent of its members are facing serious financial losses due to canceled events. More than 98 percent of the members are not even insured against outbreak-related cancellations. The industry is staring at refunds of up to US$973 million.