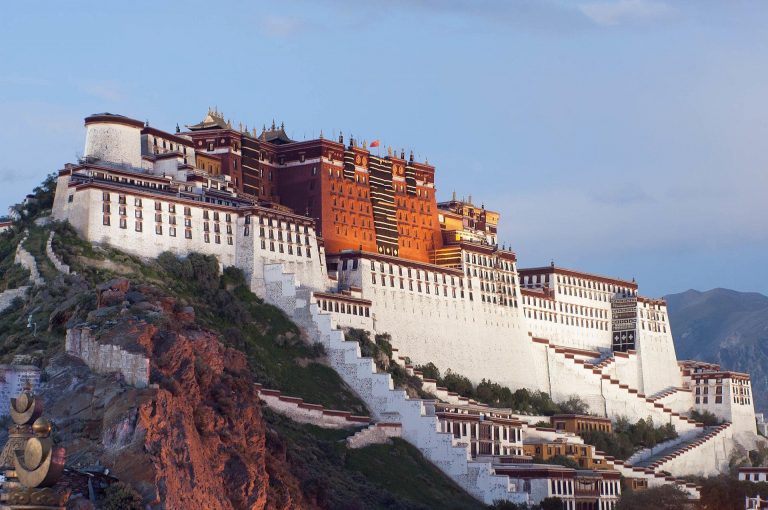 The Potala Palace in Tibet is a highland temple that has attracted worldwide attention for thousands of years. (Image: Coolmanjackey via Wikimedia Commons)

The Potala Palace in Tibet is a highland temple that has attracted worldwide attention for thousands of years. It has fascinated countless people because this temple hides many inexplicable secrets, which makes people feel curious and yearn for answers.

The Potala Palace is located on top of a mountain called Marpori (Red Mountain) in the northwest of the city of Lhasa, the capital of the Tibet Autonomous Region of China. It is a grand fortress-like complex, which was originally built in the 7th century. Later, a lightning strike sparked off a fire and destroyed it. After being rebuilt in the 17th century, it became the winter palace of the Dalai Lama, and it was Tibet’s political and religious center.

The Potala Palace has a distinctive Tibetan style, is built on a mountain, and has a magnificent ambiance. There are countless treasures in the palace, which is also an art palace. It was declared a “national important cultural relic unit” in 1961 by the state council of China and was included in the World Cultural Heritage in 1994.

The Potala Palace is a 13-story building, 117.2 meters high, 360 meters east-west, 140 meters north-south, and a footprint of about 130,000 square meters. The solid foundation ensures its safety, which was built with blocks of stones to form a thick ridged wall. The solid palace wall supports its huge volume, and the base of the wall deep into the rock layer is up to 5 meters thick.

The palace wall gradually shrank, and the wall was only 1 meter thick when it reached the top of the palace. The high wall of hundreds of meters is as flat as a knife, which is breathtaking.

Ding Changzheng, head of the Potala Palace Management Office, said that according to historical records, some walls of the palace were poured into liquid iron to strengthen sturdiness. The “White Horse grass,” which is tough, and can be used for heat insulation and ventilation, while being wormproof, was dyed red and used as part of the wall materials, which also greatly reduced its weight.

At the same time, rumor has it that there was a maze-like underground palace in the Potala Palace that contained treasures and precious books. Ding told the reporters that with the exception of the ridge wall, there was no underground palace. The Potala Palace preserves a wealth of historical relics: a vast array of murals, stupas, statues, thangkas, pattra-leaf sutras, Kangyur, and a large amount of gold, silver, porcelain, enamel, and jade to name just a few of the many precious items within the palace walls.

However, such a sacred place has accumulated a lot of rubbish. In the 1980s, when the first phase of maintenance of Potala Palace took place, the staff made a thorough inventory of all the items during the clean-up, and finally, a dozen vehicles of garbage were taken away.

According to Ding, the garbage was mainly distributed in the underground ridge-wall space and warehouses, and some of it has even existed for centuries. During the construction of the ridge wall, some abandoned construction materials and useless ridges were not well cleared. Part of the garbage came from the weathering materials of the ridge wall, and the broken rafters left behind after decaying.

The Tibetans believe that the Potala Palace is a sacred place of Buddhism. Every item in the palace has divinity. Throwing away the garbage will bring you bad luck. Therefore, some rubbish was piled up in the warehouses.

The Potala Palace is full of treasures, and some valuable small objects can easily be mixed in with the trash. So no one dares to discard garbage casually; otherwise, treasures will be probably thrown away.

It is said that during the first phase of maintenance, when the staff carefully checked the garbage, some treasures such as coral, turquoise, and silver coins were found. This magnificent building is full of magic, waiting for people to appreciate and explore it slowly.