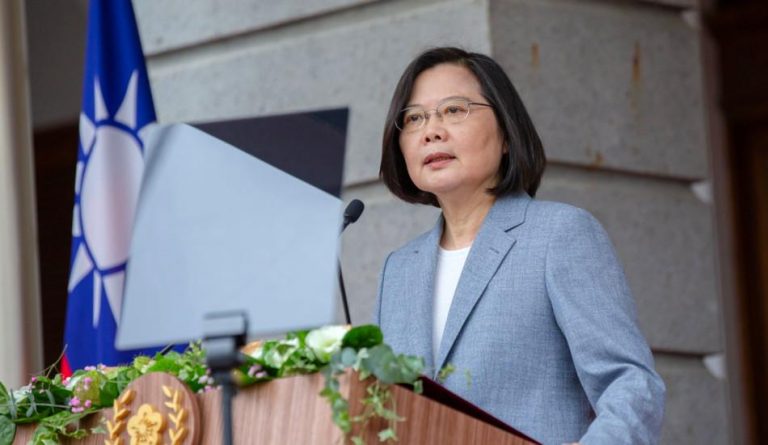 Tsai Ing-wen was elected as the President of Taiwan in 2016 and after that China’s aggression increased. (Image: via Flicker)

Tsai Ing-wen began her second term as the President of Taiwan by delivering a speech in which she outlined her plans for the island nation. One aspect highlighted in the speech is the establishment of a constitutional amendment committee, something that has attracted the attention of the Chinese Communist Party.

Tsai committed herself to optimizing government institutions over the next four years of her term. “Our Legislative Yuan will establish a constitutional amendment committee, giving us a platform to engage in dialogue and reach a consensus on constitutional reforms pertaining to government systems and people’s rights. This democratic process will enable the constitutional system to progress with the times and align with the values of Taiwanese society,” she said in her speech, as reported by Focus Taiwan.

The President proposed that the voting age be brought down from 20 to 18. Tsai wants citizens to act as lay judges in court and thereby ensure people’s participation in judicial reforms. She believes that such a move will eliminate any distrust between citizens and the judiciary. The Executive Yuan, headed by the President herself, will look into reforming constitutional institutions. By August, Tsai wants to establish a National Human Rights Commission that she believes will place human rights as the central ethos of Taiwan.

Chinese officials will be closely monitoring the progress of the constitutional amendment committee since such a committee will have the right to change the national status of Taiwan. This will clearly infuriate the CCP since it sees Taiwan as belonging to China, and has several times indicated that it might even launch an invasion to annex the island country.

Meanwhile, the opposition Kuomintang (KMT) party has demanded that Tsai guarantee that the proposed constitutional amendment committee will not be used to change Taiwan’s national status. While Tsai’s DPP party is known for its fierce pro-nationalist stand, the KMT leans more toward Beijing and argues against an independent Taiwanese identity.

Taiwan’s relationship with the U.S. will play a critical role in how strongly the island nation will pursue its independent status. In an interview with the BBC this January, Tsai mentioned that there was no need to formally announce the independence of Taiwan since the island is already managed by its own people.

With the U.S.-China relationship expected to turn even worse in the future as these two superpowers compete for the top spot globally, America will seek to strengthen its ties with Taiwan. An important focus point of American policy will be to help Taiwan assert its independent status and ensure that they are recognized by world governments. A strong Taiwan together with Japan and South Korea will act as a powerful deterrent against Beijing’s plans to dominate East Asia.

After Tsai Ing-wen was sworn in, a Japanese official stated that his country was looking forward to strengthening ties with the island nation. In a recently released diplomatic bluebook, Japan classified Taiwan as an “extremely important partner,” which is an upgrade from last year’s status as a “critical partner.”

The bluebook emphasized Japan’s support for Taiwan in getting an observer status at the World Health Assembly. Tsai has a huge fan following in Japan and has earned the goodwill of the Japanese people who want their country to have excellent relations with Taiwan.

Tsai’s swearing-in ceremony was also attended by two parliament members from India’s ruling BJP party. Back in 2016 when Tsai was sworn in as the President, the BJP canceled plans to send representatives since it did not want to affect ties with China. As such, BJP’s current support for Tsai indicates that Taiwan has gained the backing of another strong democratic country in its struggle against the communist regime.