Wrongdoing Is Passed Down the Generations 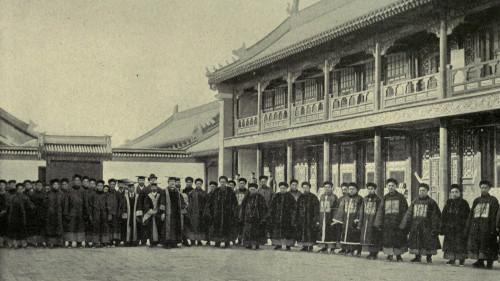 In the Qing Dynasty, during the Qianlong reign, there was an examination testing site in Jiangnan Township where a candidate named Yu from Jiangyin was sitting in the first session. (Image: Public Domain)

There is a story in the Yuetan Sulu, which is a novel written by He Bang-e. In the Qing Dynasty, during the Qianlong reign, there was an examination testing site in Jiangnan Township where a candidate named Yu from Jiangyin was sitting in the first session. Yu gave up on the exam and prepared to return home after the first session ended. Some candidates asked him the reason why he wanted to leave. Yu hesitated and then told the truth. Here is his story.

Yu’s father spent most of his life as an official, but after retirement suffered from a phobia and could not recover. On his deathbed, Yu’s father called his four sons to him and said: “When I was a county magistrate, I took a bribe of 2,000 taels (2,600 oz) of gold and mistakenly executed two people.

With such a huge sin, the original punishment of Heaven is to cut off my heirs. But because of the virtue of our ancestors, one son can live and inherit, and the next five generations will be poor. I know that I am too sinful to escape the suffering of hell. If one of my descendants ignores destiny and wants to be an official, this will aggravate my sin. To show your filial piety to me, I hope you do more good deeds.” Yu’s father died after speaking. Later, all of Yu’s brothers passed away one after another until only Yu remained.

However, Yu did not take his father’s last words seriously. He attended the township exam twice but failed because the ink stained the test paper. This time, he attended the exam again, but when feeling he was doing well in writing the composition, he suddenly saw his father looking sad and saying to him: “Why don’t you listen to me; you always have inordinate ambitions? What you did has made me suffer more. If you do not correct yourself, big calamities will come to you.”

After Yu disclosed this, he burst into tears and shocked the invigilator. On seeing that his test paper was stained with ink again, he could only sigh helplessly.

Yu continued: “I am 25 years old, and I have failed the imperial exam three times. The only thing I feel sad about is that my father still suffers in hell. I am terribly sorry for what I have done.”

Everyone was surprised at what he said. It turns out that one’s wrongdoing really hurts the offspring in their future lives and increases the sins of the forebears.