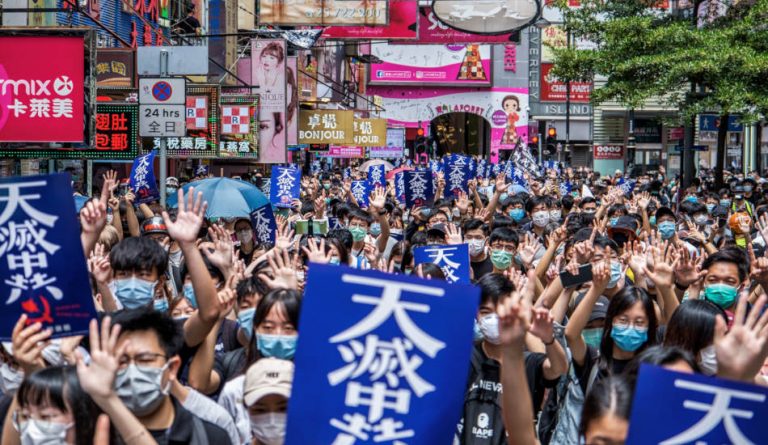 Under a new law in Hong Kong, pro-democracy and free speech activists can be classified as a threat to national security. (Image: Studio Incendo via flickr CC BY 2.0 )

The Chinese Communist Party (CCP) has approved a national security law that will enable the mainland government to criminalize activities in Hong Kong that are determined to be a challenge to the Party’s authority in the city. Using the new law, pro-democracy activists and free speech activists can be classified as a threat to national security, allowing the Chinese government to take strict action against such people.

After the law was passed by China’s National People’s Congress (NPC), the delegates broke out in a cheer. Detailed legislation will soon be drafted and possibly enacted over the next few months. The law will potentially allow Chinese security forces to operate in Hong Kong. Officials from the city, who have a pro-Beijing stance, claim that the law is necessary to tackle increasing instances of terrorism and violence.

However, independent experts warn that the national security law has essentially stripped Hong Kong of its autonomy, putting the city under the strict control of the Communist Party. When Britain handed Hong Kong over to China under the “one country, two systems” principle that was agreed upon in 1997, Beijing promised that it would allow Hong Kong to remain autonomous for 50 years. However, after just a few decades, the Communist Party has killed the spirit of the agreement.

U.S. President Donald Trump criticized Beijing for taking such harsh measures against Hong Kong. “China has replaced its promised formula, ‘one country, two systems,’ with ‘one country, one system’… [The law is] diminishing the city’s long-standing and very proud status… This is a tragedy for the people of Hong Kong, the people of China, and indeed the people of the world,” he said, as reported by The Epoch Times.

President Trump announced that the administration will be revoking Hong Kong’s preferential trading status, a move that will put the city’s position as a global financial hub at risk. As a consequence, the U.S. government will now treat Hong Kong just like any other Chinese city. Imports from the region will now have to pay tariffs equivalent to what is being charged for Chinese mainland imports. Laws governing extradition treaties, customs, etc., will also have to be modified.

President Trump stated that he will update U.S. travel advisories to reflect the increased danger in Hong Kong resulting from the stronger control of the Communist Party. He also indicated that the administration will take steps to sanction officials from Hong Kong and China responsible for diminishing the autonomy of the city.

The Chinese government expressed strong opposition to America’s decision to end the preferential treatment of Hong Kong, as well as to impose sanctions. They warned that any sanction will be a double-edged sword and will soon affect the U.S. “significantly.”

The UK government is considering offering citizenship to Hongkongers who hold a British National Overseas (BNO) passport if China continues to maintain the national security law in the city. At present, almost 2.9 million Hong Kong residents are eligible for the BNO passports. Almost 300,000 BNO passport holders in Hong Kong already have the right to visit the UK for a period of up to 6 months without needing a visa.

According to the proposed changes, eligible passport holders will be able to spend 12 months in the UK, which will eventually open up a path toward full citizenship. Home Secretary Priti Patel stated that the UK government was deeply concerned about China’s actions against Hong Kong. Some MPs in the UK have even proposed to award automatic citizenship to BNO holders.