The Making of ‘Finding Courage’ 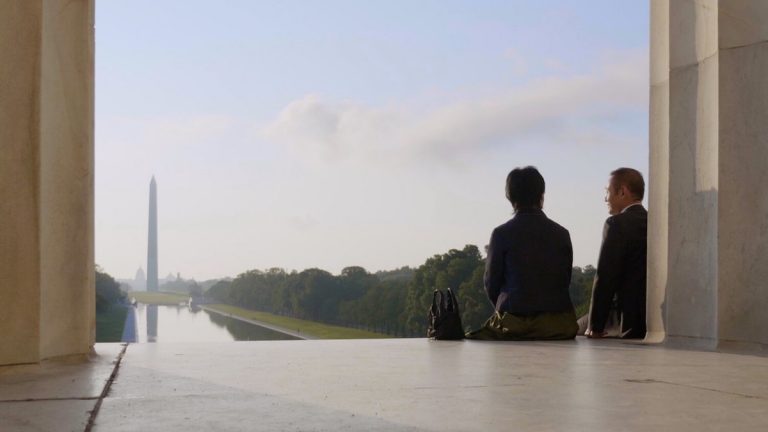 A scene from the feature-length documentary 'Finding Courage.' (Image: courtesy of Swoop Films)

In many ways, the documentary Finding Courage is an accidental film. Its director, Kay Rubacek from Swoop Films, initially never sought to make it a full-length feature.

Having just finished producing the award-winning Hard to Believe documentary — about forced organ harvesting in China — Kay was looking to make her directorial debut with a short 10-minute film.

That smaller project was going to focus on the experiences of Yifei Wang, a former Chinese journalist living in exile who was briefly featured in Hard to Believe.

It was early 2015 when New York state-based Kay and co-producer/cinematographer Paulio Shakespeare traveled to San Francisco to spend time with Yifei and a translator. Together, they began to learn how Yifei was persecuted for her faith in China.

“There was so much to her story,” Kay said about Yifei, a Falun Gong practitioner, whose escape from China was made possible through the help of Gordon, her high-profile journalist husband who was then still back on the mainland.

“It was just shocking to find out her brother was in prison, that her sister’s body was still in a morgue,” Kay said.

Yifei’s younger sister Kefei — also a Falun Gong practitioner — was beaten to death in a labor camp in Jilin City in China’s northeast in 2001. Kefei was 32 years old when she was killed. The labor camp’s authorities have refused to release her remains from the morgue to her family.

Yifei’s brother, Leo, had also been held and tortured in a prison for 13 years for printing flyers about Falun Gong, a spiritual discipline that includes meditation and slow-moving exercises. Its practitioners adhere to three main principles: Truthfulness, Compassion, Tolerance. Due to the practice’s popularity, the Chinese communist state began to persecute tens of millions of Falun Gong practitioners in 1999.

Several months after Kay did the initial filming, she learned that Leo had managed to get out of China, reuniting not only with his sister, but also his wife and son who had earlier sought freedom in the U.S.

“So, we began to film his reunion with his wife and son,” Kay said. “His wife didn’t want to go on camera, but suddenly she decided she would, and the film started expanding.

The film further grew when Kay learned that Yifei’s husband Gordon back in China had taken some undercover footage of the labor camp where Kefei had been imprisoned. Gordon also took an undercover video in the morgue where Kefei’s remains were still being held.

“Gordon agreed to give us access to his footage and that he was going to do all this undercover filming. We encouraged him but were very scared for his safety because he was putting himself into grave danger,” Kay said.

After the secret footage was relayed to Kay and Paulio, they felt indebted to the family to tell their story in a feature-length format.

They then set out to find other voices — witnesses and communist regime insiders — to tell the family’s story in a way to make it more accessible for a Western audience.

“I got to the point where I just knew the family couldn’t explain a lot of the politics surrounding the issue and I thought without that it would be hard for people to understand,” Kay said. “So that’s when I started seeking insiders, former regime officials to fill in the gaps.”

Kay found a number of regime insiders who are now living abroad and willing to talk. Among those interviewed were a former labor camp director, an ex-judge, and a past national security agent from China’s Gestapo-style “6-10 Office.”

“Winning their trust was a challenge, especially when I had to speak through a translator. It was a real process with each one of them. Some of them were more open than others,” Kay said.

“Speaking with the labor camp director, I learned so much how the (Chinese Communist) Party works and he was just so matter-of-fact about everything; actually, all of them were,” she said.

“They went through all these emotions; you could see there was underlying guilt in a lot of them… It’s difficult for them to go back into [what occurred in China].”

To get many of these interviews, Kay and Paulio traveled abroad as they likewise did to interview several labor camp survivors living outside of China who had witnessed Kefei being ill-treated and tortured.

“Because Yifei Wang is a journalist herself, she had been tracking down what occurred to her sister and already knew some of these witnesses,” Kay said, adding that she found others, one of whom she serendipitously met at a New Jersey screening of Hard to Believe.

With over a hundred hours of footage, Kay then began the film’s post-production, which took almost three years. The final edit was completed earlier this year and the film is currently being reviewed by media.

“The film was made for the big screen — a lot of effort went into the visual storytelling,” she said. “We really wanted it on the big screen and to do film festivals and then have it broadcast on TV. With the pandemic that has all changed — a lot of the festivals we applied for have either been postponed or canceled,” she said.

One festival that Finding Courage was accepted in went ahead without screenings and the film won a gold award.

“We have been accepted for a couple of other festivals, but we don’t know at present if they are going ahead with screenings,” she said.

While the pandemic has affected Kay’s ability to get festival reviews for the film and subsequently get it broadcast, she said they are getting reviews by directly contacting the media.

“But we are getting close; we will definitely have it out very soon for people to watch,” Kay said.