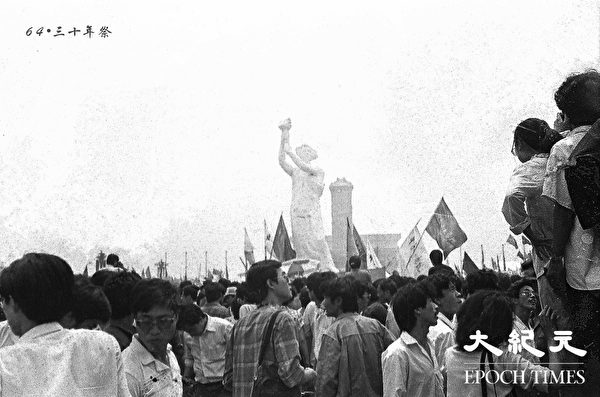 The Statue of Democracy at Tiananmen Square in 1989. (Image: Public Domain)

Thirty-one years ago, in the early morning of June 4, 1989, as the Chinese Communist tanks ruthlessly rolled over the student protesters at Tiananmen Square and the People’s Liberation Army (PLA) opened fire on the unarmed students and civilian pro-democracy demonstrators, thousands of innocent lives perished along with their ideals of freedom and democracy.

To this day, there is no accurate accounting of the lives lost during the June Fourth Massacre that shook the world and the Chinese Communist Party (CCP) continues to hide the truth.

On that historic day, countless people — students, workers, and civilians — sacrificed their lives and shed their blood on the streets of Beijing for a free and democratic China. Among them, high school students Jiang Jielian and Wang Nan were only 16 and 17 years old, respectively.

Fang Zheng stood in front of the tanks to protect students who were being pursued. Both his legs were crushed. Fang Zheng is now in the United States and is still fighting for a free and democratic China. Qi Zhiyong, like Fang Zheng, lost a leg trying to protect the students. Despite suffering from chronic illness and receiving kidney dialysis several times a month, he has continued to be harassed by the Chinese communist regime for the last 31 years.

After June 4, 1989, the families of the victims of the massacre banded together. Two mothers, Ding Zilin and Zhang Xianling, have never given up their demand to the Chinese communist authorities to reveal the truth about the June Fourth incident and the names of the victims. Their perseverance and relentless efforts for the justice of their children have been a constant reminder of the tragic event.

The world has not forgotten the Tiananmen Square Massacre and the Chinese communist regime has not ceased its suppression and killing of its people. In Tibet, the military police shot and killed Tibetans by accusing them of rioting when the Tibetans were fighting against the persecution of their belief. One Hundred Fifty Tibetans sacrificed their lives by committing self-immolations to defend their beliefs. In Xinjiang, millions of Uyghurs have been sent to re-education camps where some have been brutally killed.

History has shown that the crimes committed by the communist tyranny have proven to be more terrifying and vicious than the Nazis. Since the Chinese Communist Party took over mainland China in 1949, it has launched many political movements in China that caused the deaths of millions of people.

The Great Famine between the years 1959 and 1961 was the greatest manmade disaster in human history, with an estimated death toll in the range of tens of millions due to starvation. The Anti-Rightist Movement, the Cultural Revolution, the One-Child family policy, the Tiananmen Square Massacre, and the suppression of Falun Gong spiritual practice since 1999 have resulted in the deaths of over 100 million Chinese citizens.

Now, Hong Kong has become the CCP’s next target as it tightens its grip on Hong Kong by disregarding international treaties, violating the Basic Law of Hong Kong, and attempting to impose mainland China’s National Security Legislation in Hong Kong. At this critical juncture, every one of us who love freedom and democracy must stand united with Hong Kong.

We have not forgotten the June Fourth Massacre; we must hold firm to our ideals and truth and refuse to accept the lies that lead to oblivion. We must pass on the spirit of China’s greatest generation.

Written by Mr. Xianhun Ning. During the June 4th event, he was the chief commander of the Shen Yang City support group, the president of the Shen Yang Patriotic autonomous group, and spent 7 days with the commanders and members of the Beijing Workers Union.