Breakfasts From Around the World: Portuguese Egg Tarts of Macau 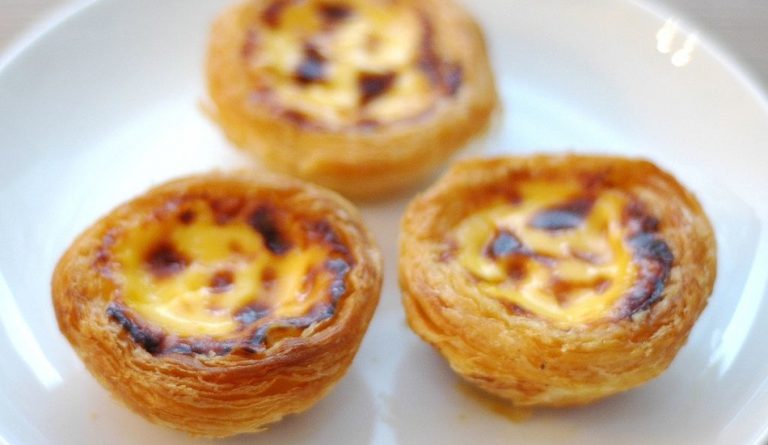 Portuguese egg tarts with their creamy custard filling and flaky pastry are a popular breakfast item in the Chinese region of Macau. (Image: Jpatokal via Wikimedia Commons)

We will explore a popular breakfast in the Chinese region of Macau — Portuguese egg tarts with creamy custard filling and flaky pastry.

The first meal of the day: that which breaks the fast. Breakfast doesn’t necessarily need to be in the morning. It’s whenever you break the fast. It could be in the afternoon for those fasting intermittently, and in the evenings for One-Meal-A-Day enthusiasts. Different regions have their cultures and foods eaten to break fasting.

When it comes to breakfast, Hong Kong and Macau have very different tastes compared to mainland China. On Chinese territory, Macau is apparently the first and last European colony. Portugal controlled the land from 1557 to December 1999.

Breakfasts from around the world

The No. 1 breakfast delight in Macau is Portuguese egg tarts

With an area of just under 12.75 square miles and a population of almost 670,000, Macau is the most crowded place in the world. Macau has many different styles of cuisine ranging from Chinese and Japanese to Portuguese and Macanese. But the No. 1 delight to have while in Macau is Portuguese egg tarts.

These are quite different from the Chinese version with caramelized sugar. In Macau, there used to be a couple, and like most couples nowadays, they ended up splitting and going their separate ways. But they had one thing in common — a unique take on Portuguese egg tarts. They replaced the traditional flour filling with fresh cream, and fresh cream is always better than dry flour, right? Soon, their recipe grew famous all throughout the region, but then the unfortunate separation happened.

Lord Stow and his former wife Margaret now run their separate outlets — Lord Stow’s Bakery and Margeret’s Café. Always good when piping hot, you should test both while you’re in Macau and decide for yourself who’s got the better bite. Margaret went on to sell her recipe to KFC. This allowed the franchise giant to roll out Portuguese egg tarts all across their outlets in China and made the dish quite famous.

Other breakfast items in Macau

Congee is another popular breakfast item in Macau. It comes with eggs, pork, or chicken. Having a bowl of congee in the morning will give you more than enough energy to last through to the afternoon. This is especially popular with employees who work manual labor. In this case, Piu Kei is the place to be with many different dishes to choose from, including their popular wonton noodle soup.

Pork buns are a very popular snack in Macau. For these, you need to head on over to a tourist favorite, San Hou Lei. There will be a bit of a rush during peak times, so have patience. While over there, you can also try out their version of the egg tarts — made with fresh milk.