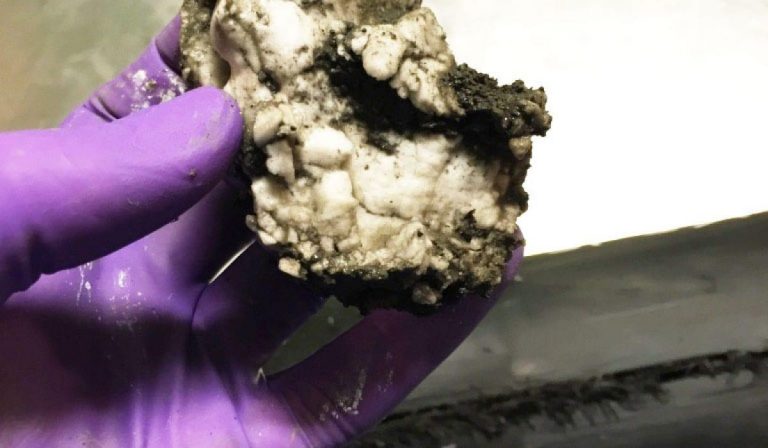 A gas hydrate is a an icy solid form of gas, often methane. (Image: CAGE)

The 250-million-year-old cracks in the seafloor feed the greenhouse gas methane into giant craters in the Barents Sea. More than 100 craters, presently expelling enormous amounts of the greenhouse gas into the ocean, are found in the area. A CAGE paper published in Science in 2017 described hundreds of massive, kilometer-wide, craters on the ocean floor in the Barents Sea.

Today, more than 600 gas flares are identified in and around these craters, releasing the greenhouse gas steadily into the water column. Another CAGE study, published in PNAS, mapped several methane mounds, some 500 m wide, in the Barents Sea.

The mounds were considered to be signs of soon-to-happen methane expulsions that have created the craters. The most recent study in Scientific Reports looks into the depths far beneath the sediment in the ocean floor and reveals the geological structures that have made the area prone to crater formation and subsequent methane expulsions, according to Malin Waage, a postdoc at CAGE and the first author of the study:

“It turns out that this area has a very old fault system — essentially cracks in bedrock that likely formed 250 million years ago. Craters and mounds appear along different fault structures in this system. These structures control the size, placement, and shape of the craters. The methane that is leaking through the seafloor originates from these deep structures and is coming up through these cracks.”

The deep origin of craters and mounds was discovered using cutting edge 3D seismic technology that can penetrate deep into the ocean floor and help scientists visualize the structures in the hard bedrock underneath. Waage said:

“Our previous studies in the area hypothesized that climate warming and the retreat of the ice sheet some 20,000 years ago, caused the gas hydrates beneath the ice to melt leading to abrupt methane release and creating craters.”

Gas hydrates are a solid form of methane, among others, that is stable in cold temperatures and under pressure, which an enormous ice sheet provides. As the ocean warmed up, and the pressure of the ice sheet lifted, the methane ice in the seafloor melted and thus the craters were formed. Waage explained:

“This study, however, adds several layers to that picture, as we now see that there has been a structural weakness beneath these giant craters, for much longer than the last 20.000 years. Deep below the seafloor, the expansion of gas and release of water build up a muddy slurry which eventually erupted through the fractures and caused seafloor collapses and craters in the hard bedrock. Think of it as a building: A roof of a building can cave in if the ground structure is weak. We believe that this is what happened in the crater area after the last glaciation.”

The Barents Sea is poorly understood

The exploration of petroleum resources in the Barents Sea is a hot topic in Norway and beyond, as the area is a part of a vulnerable Arctic ecosystem. But the area’s geological system is poorly understood. Waage said:

“Our 3D survey covered approximately 20 percent of the entire crater area. We believe that it is important to understand if similar fault systems exist in the larger context of the Barents Sea because they potentially could pose a threat to marine operations.”

Some of the questions that scientists, society, and the industry do not know the answers to are: Will these weak structures lead to unpredictable and explosive methane release? Can such release and related geohazards be triggered by drilling? And can the gas reach the atmosphere in case of abrupt blow-outs, adding to the greenhouse gas budget? Waage said:

“There is still very much that we don’t know about this system. But we are currently collecting and analyzing new data in the Barents Sea, dominated by similar crater structures. This can help us map in bigger detail the fault systems and associated weakness.”

Provided by: Maja Sojtaric, CAGE — Center for Arctic Gas Hydrate, Climate and Environment [Note: Materials may be edited for content and length.]