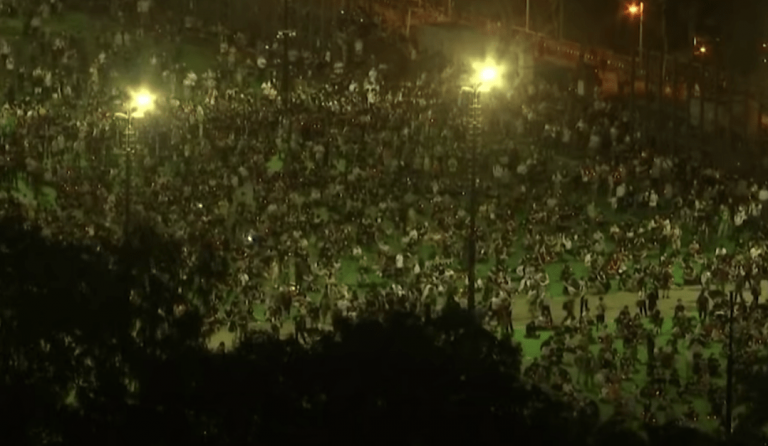 On the evening of June 4, 2020, in spite of a police ban against the annual Victoria Park vigil, Hong Kong people gathered in unison to light candles and held a moment of silence to mourn and commemorate those who perished in the crackdown at Tiananmen Square on June 4, 1989. (Image: YouTube/Screenshot)

On the evening of June 4, 2020, in spite of a police ban against the annual Victoria Park vigil, Hong Kong people gathered in unison to light candles and held a moment of silence to mourn and commemorate those who perished in the crackdown at Tiananmen Square on June 4, 1989. They show a heart of togetherness to mourn the cold-blooded massacre of the victims. This act of courage and defiance signifies the unyielding spirit for democracy.

In order to intimidate and forestall the determination of the people to commemorate June 4, the Chief Executive of Hong Kong, Carrie Lam, deliberately extended the restrictions until June 4 to prevent gatherings. However, people spontaneously defied the ban and tens of thousands of people stood up in unison, fearlessly, to express their anger and resolve.  What can Carrie Lam do?

If everyone cowered and succumbed to intimidation, Lam would have succeeded in her plot to stop the gathering. If few people stand up, they can easily be suppressed and downtrodden and inevitably sacrifice themselves. On the other hand, if many people stand up, and stand firm this show of strength is enough to resist violence from the tyrant.

On the night of June 4 during the candlelight vigil, a handful of policemen mingled among the crowd as civilians. They did not intervene. Instead, they could feel the justice of the movement and the undying passion of the Hong Kong people on the ground.

The difference between June 4 this year and past years is that Hong Kong people are no longer alone. During the past three decades, only Hong Kong people stood up to commemorate the June 4 massacre.

This year, the U.S. State Department issued an official statement confirming that the U.S. Secretary of State, Michael Pompeo, met Wang Dan and three other survivors of the Tiananmen Square crackdown. Wang Dan was then one of the leaders of the Chinese democracy movement. In Taiwan, President Tsai Ing-wen delivered a commemorative speech.

In the past 30 years, the U.S. government had never formally expressed its support for the Chinese democracy movement of June 4. Today, the anti-communist struggle of the Hong Kong people has become the forefront bastion of the U.S. government.

History is written by the people, not by the tyrants. History is written by the future generations, the survivors, not by the despots. Tyrants will always try to seize the opportunity to spike history in their favor. During their reign, they try to cover up the truth and write history in order to deceive people, but history has its own recollection that is determined by later generations so as to maintain justice, honesty, and fairness.

One’s judgment on whether history is right or wrong is usually based on the sincerity, integrity, and professionalism of the individuals recording and being faithful to the people and events involved. From generation to generation, people keep in mind and uphold the everlasting principles of justice, fairness, and decency.

This keeps humankind from degenerating and from being robbed of our divine nature. This is the reason why June 4 must never be forgotten because it represents the fundamental rights and interests of all Chinese people, as well as humanity itself, and records the sacrifices of all those that made that heroic stand against tyranny.

The Chinese Communist Party (CCP) can use tanks to suppress people, but it cannot squash the human heart. With the enactment of the CCP’s National Security legislation against Hong Kong, it can only solve, or at best cover-up, superficial struggles, but it cannot kill off Hong Kong people’s anti-communist determination.

What the Chinese Communist Party fears most is that no one in Hong Kong is afraid of death. They have resolve, backbone, and dignity. They know that a fate worse than death awaits them. The Hong Kong people will never give up or surrender, no matter how much pressure or tyranny they face. As long as Hong Kong people never submit, keep the faith, and stand together victory is within their own hands.