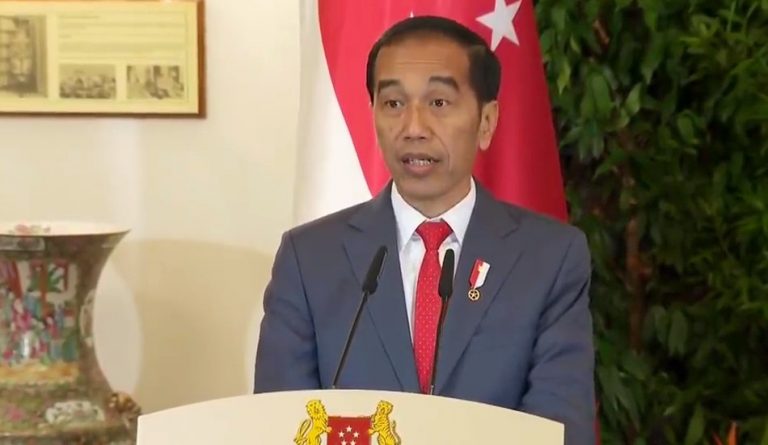 Indonesian President Joko 'Jokowi' Widodo has rejected a Chinese call for negotiation with regard to the South China Sea. (Image: Screenshot via YouTube)

The government of Indonesia has rejected a Chinese call for negotiation with regard to the South China Sea. Jakarta argued that such negotiations were not necessary since China does not have any overlapping claim with Indonesia’s Exclusive Economic Zone (EEZ).

In a letter to UN Secretary-General António Guterres, Beijing reiterated that they have no territorial dispute with Indonesia but pointed out that the two nations have overlapping claims over some of the maritime routes in the South China Sea. The letter was in response to an Indonesian diplomatic note that had completely dismissed China’s Nine-Dash line map that incorrectly identified regions in the South China Sea as belonging to China.

Such a claim is not accepted by any reputed international entity. In fact, the letter points out that the Nine-Dash line map has no legal validity since it runs contrary to the United Nations Convention on the Law of the Sea (UNCLOS) 1982. Indonesia also reiterated its support for a 2016 ruling made by the Permanent Court of Arbitration in The Hague in which the court rejected China’s arguments and agreed with Philippine territorial claims in the South China Sea.

“We never know what China’s intentions are in establishing a Nine-Dash Line. It may have the potential to create conditions that disrupt what was determined by Indonesia from a long time ago… Therefore, we need to inform these matters by communicating our position openly to the international community,” Indonesian ministry spokesman Teuku Faizasyah said to BenarNews, as reported by Radio Free Asia.

The South China Sea is not only an important trade route but is also rich in fishing and hydrocarbon resources. All countries in the region, including Brunei, Malaysia, Vietnam, Taiwan, and the Philippines have competing claims. Back in 2002, the Association of Southeast Asian Nations (ASEAN) together with China agreed on a Declaration of Conduct, a statement of principles that outlines how countries should act in the South China Sea. However, an agreement on the Code of Conduct has been difficult to prepare. The deadline for accepting the Code of Conduct has been set for 2021.

Vessels belonging to China and Malaysia were recently locked in a 30-day plus standoff near the island of Borneo in the South China Sea. The Malaysian vessel was looking for resources in the region when a Chinese survey vessel together with coast guard ships suddenly arrived and started scanning the region.

Malaysia immediately deployed naval vessels to deal with the situation. U.S. warships, which had been conducting joint exercises nearby, provided support. James Holmes, a professor at the U.S. Naval War College, stated that the more China displays aggression in the South China Sea, the closer U.S. coalition partners will unite to push back against the threat.

Though the Chinese vessel eventually left, the incident is a stark reminder of how aggressive Beijing is becoming in the South China Sea. Much of China’s confidence in these waters comes from the fact that it has constructed artificial islands in the region. This provides Chinese ships with a forward base, essentially turning countries like Malaysia and Indonesia into front-line states.

Beijing claimed that the vessel was only conducting routine activities in waters “under Chinese jurisdiction.” The U.S. has asked the Chinese Communist Party to stop its bullying tactics in the South China Sea.