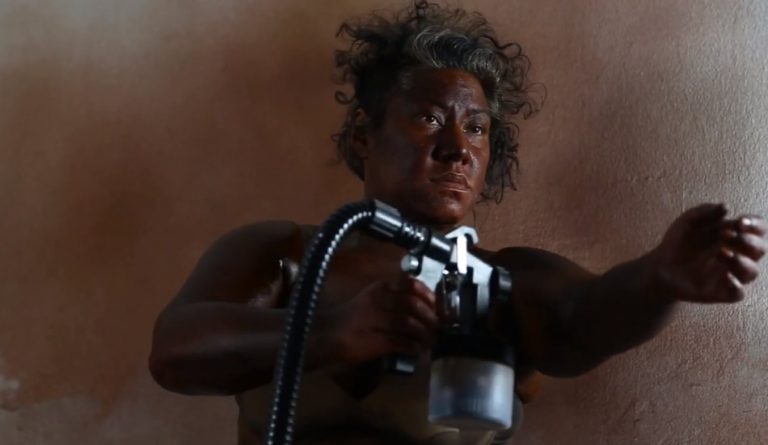 Latai Taumoepeau is a Tongan Australian artist who is best known for performance art that explores the themes of race, power, and climate change. (Image: Screenshot / YouTube)

Latai Taumoepeau is a Tongan Australian artist who is best known for performance art that explores the themes of race, power, and climate change. She believes that artists can play a key role in aiding communities affected by the devastation triggered by changing weather patterns.

Taumoepeau is one of the core members of the Refuge project, which brings artists and creative people together to brainstorm catastrophic scenarios and figure out solutions. Taumoepeau points out that since it is an artist-led event, new ideas are springing up on how to manage emergencies that are different from the usual solutions that normally focus on the use of military resources.

Taumoepeau began looking into climate change and its effects in the Pacific in 2007. The same year, she accompanied some delegates from the Pacific Islands to a conference on climate change. This was when she realized that her work could act as a medium to bring attention to this issue.

In 2016, Taumoepeau premiered her work Disaffected, which explored how climate change affected the Pacific region. When thinking about how best to make people understand the issues surrounding climate change, Taumoepeau decided that using things like maps, diagrams, and charts is not good enough. Instead, the human body is better suited to convey such messages through performance art. In Disaffected, Taumoepeau uses the human body as a metaphor for land that is facing inundation due to rising seas levels.

For this year’s Refuge project, Taumoepeau was selected as the lead artist. However, the COVID-19 lockdown ended the project’s preparations in March and Taumoepeau was forced to return back home to Sydney where she has been under lockdown. The Refuge project adapted to the lockdown restrictions, with members using video conferencing apps to converse and discuss the pandemic.

Taumoepeau hopes that her work will enable people to see the connection between climate change and the COVID-19 pandemic. “After the bushfires, it broke through to many that climate change is real; but in the shadow of this pandemic, it’s difficult to connect these things… The work, now, is looking at the relationship between what we do and have done and the natural world… This whole thing is connected,” Taumoepeau believes (ABC News).

Taumoepeau’s home country Australia has had its share of extreme weather. In fact, the past year has been one of the worst in history for the country. It was ravaged by widespread bushfires, storms, floods, and drought. The bushfires are estimated to have burned 50 million acres of land, with almost 6,000 homes and other structures completely destroyed, and up to 800 million animals killed. In a recent study, researchers used a measurement standard called the Fire Weather Index to try to determine the influence of climate change on bushfires.

The researchers calculated the index value of southeastern Australia for the December-January period when the fires were at their peak and got results that were extremely high. They believe that high values like these are now at least four times as likely to occur than they were a century or so back. If so, it means that the chances of bushfires in Australia are now higher than ever before. The researchers also concluded that extremely hot weeks are two times as likely to occur now as compared to the pre-1900s.