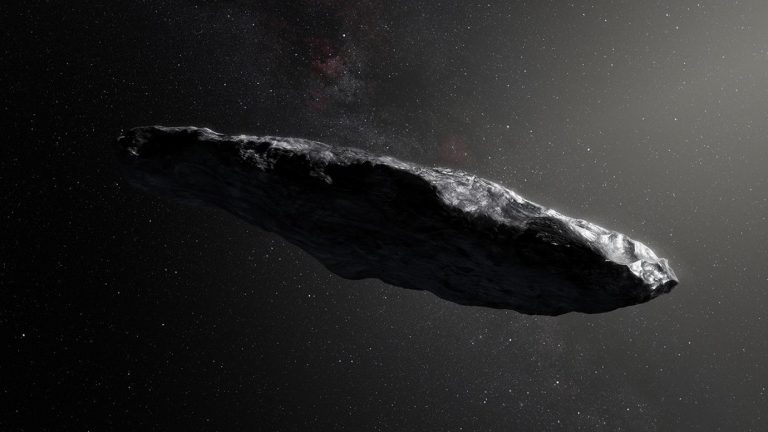 An illustration of ‘Oumuamua, the first object we’ve ever seen pass through our own solar system that has interstellar origins. (Image: courtesy of European Southern Observatory / M. Kornmesser)

The aliens came on Oct. 19, 2017. That was the day telescopes picked up a strange object with an odd, elongated shape that moved like a comet — but had no apparent tail. The object, which baffled astronomers and led some to claim it could be a spacecraft sent by intelligent life, was named ‘Oumuamua, which means “messenger from afar arriving first” in Hawaiian. But a new theory proposed by University of Chicago and Yale astronomers explains the phenomenon without aliens — but with interesting scientific implications. Darryl Seligman, an incoming UChicago postdoctoral fellow who authored a paper in Astrophysical Journal Letters, said:

“It’s a frozen iceberg of molecular hydrogen. This explains every mysterious property about it. And if it’s true, it’s likely that the galaxy is full of similar objects.”

‘Oumuamua made headlines as the first object to visit from outside the solar system. Telescopes didn’t pick it up until it had already swung past the Sun and was on its way out, but its trajectory indicated it came from interstellar space. It also accelerated in a way that couldn’t be explained by gravity; sometimes comets can accelerate similarly, but the propulsion comes from ice on the surface that burns up in the heat from the Sun. The typical comets we’ve seen in our solar system have cometary tails, which we can see when small dust particles in the outflow reflect sunlight,  but we could not see any such sparkle of dust from ‘Oumuamua.

Last year, however, Seligman and colleagues at Yale University and Caltech showed that it could be a comet whose outflow was simply invisible to telescopes. Starting from that idea, the researchers worked their way backward to see what the substance could be in the outflow. They knew where ‘Oumuamua was, how fast it was moving, and how much energy it should be getting from the Sun at any given time, so they checked the list of what materials would give the acceleration they saw when burned up. Seligman said:

“The only kind of ice that really explains the acceleration is molecular hydrogen.”

Molecular hydrogen ice is a strange substance, only formed when the temperature is just a smidge above absolute zero. It doesn’t reflect light or produce any light as it burns up, so telescopes would not be able to see it. Seligman said:

“That we saw one at all implies that there’s a ton of these things out there. The galaxy must be filled with these dark hydrogen icebergs. That’s incredibly cool.”

There are only a few kinds of places in the galaxy where molecular hydrogen ice could be made. This one would have been made in the dense cores of something called a giant molecular cloud—massive, freezing clouds of hydrogen and helium that are the birthplaces of stars. Astronomers can’t see inside the cores of these clouds, so it would be a scientific bonanza to be able to intercept one and examine it, Seligman said.

“It would be the most pristine primordial matter in the galaxy. It’s like the galaxy made it, and FedExed it out straight to us.”

Finally, what about the odd shape? Seligman explained that the object would be constantly whittled away by energetic particles found in space and sunlight, both of which remove hydrogen from the surface:

“Imagine what happens to a bar of soap. It starts out as a fairly regular rectangle, but as you use it up, it gets smaller and thinner over time.”

’Oumuamua had been happily meandering through space, unmolested for millions of years, until it encountered our solar system. Seligman added:

“This thing got smacked like a bug on a windshield. That collision and subsequent intense radiation from the sun accelerated the process that formed the object’s unusual shape.”

That means that most of the evolution of ‘Oumuamua’s shape would have happened while it was fairly close to Earth, Seligman said, so the next time one comes by, we should be able to watch it happen in real time, which could prove the theory. The Vera C. Rubin Observatory, under construction in Chile and scheduled to be online in late 2022, is more powerful than anything currently available. If many more such icebergs are out there, scientists should soon be able to see them.