Russian Oil Spill Has the City of Norilsk on Emergency 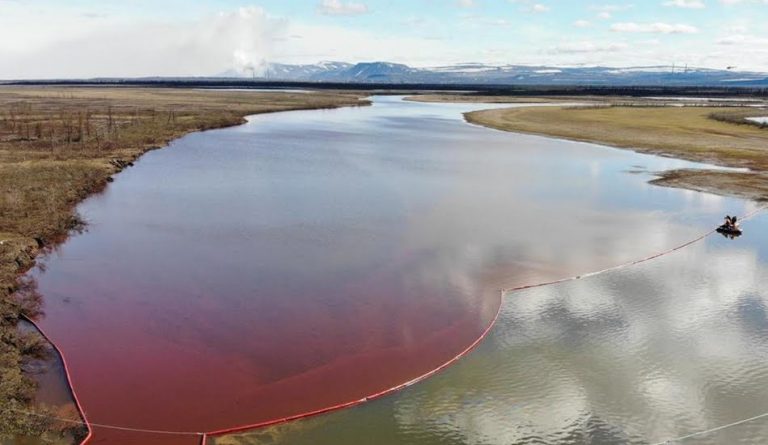 An industrial disaster at Norilsk, Russia, resulted in 21,000 tons of diesel oil being spilled into local waters. (Image: Screenshot / YouTube)

On May 29, an industrial disaster at Norilsk, the world’s northernmost city, resulted in 21,000 tons of diesel oil being spilled into local waters, contaminating the environment. As a result, President Vladimir Putin declared a state of emergency in the city. The spill has polluted the Ambarnaya River and the government believes that it may take several decades for the river to recover from the damage.

The accident happened at Norilsk-Taimyr Energy’s Thermal Power Plant No. 3 operated by Nornickel, a nickel and palladium mining company in Russia. A fuel storage tank at the plant apparently failed, leading to the oil spilling out into local rivers. According to Nornickel, the tank failed after the permafrost it was built upon began to thaw. The term permafrost is used to denote any ground that has been frozen for two or more years continuously. Almost 55 percent of Russia is estimated to be under permafrost.

The spill has affected an area of 135 square miles. Since the region has very few roads and the rivers are pretty shallow for boats, cleanup efforts have been difficult. Immediate emergency relief will cost about US$146 million. A proper cleanup will take anywhere from 5 to 10 years, with the government having to spend almost US$1.5 billion. The country’s Investigative Committee has ordered a criminal investigation surrounding the matter. The director of the plant has been taken into custody until July 31 but has not yet been charged with any crime.

Putin criticized Norilsk President Vladimir Potanin for not replacing the fuel tank at the plant in a timely manner. “If you had changed it on time there would not have been this ecological damage and the company would not have had to foot these [clean-up] costs. Study this as closely as possible inside the company,” Putin told Potanin during the televised meeting, as reported by The Epoch Times. The Prosecutor General’s office has ordered a review of all hazardous objects that have been built atop permafrost.

The Minister for Civil Defence, Emergencies and Natural Disaster Relief, Yevgeny Zinichev, revealed that all efforts are being made to localize the oil spill so that the environmental damage can be kept to a minimum. According to an expert from WWF, the oil spill is the second biggest one in the history of modern Russia in terms of volume. This isn’t the first time that Nornickel has been involved in an oil spill. Back in 2016, the company admitted that an accident at its Nadezhda plant had turned the Daldykan River red.

Shrinking permafrost has been a cause of concern in Russia for some time. Some of the permafrost layers can be up to 160 feet thick. Warming temperatures are melting much of the permafrost, even in places that have been frozen for a thousand years or more. This releases carbon in methane form, whose impact on the atmosphere can be 34 times worse than CO2 over a hundred year period.

There is also a concern that the declining permafrost in Siberia might encourage drilling for petroleum and natural gas in the region, which would end up releasing even more carbon into the atmosphere. Almost 30 percent of estimated gas reserves not yet spotted are believed to be located in Siberia. For the Russian government, Siberia is a goldmine waiting to be exploited.