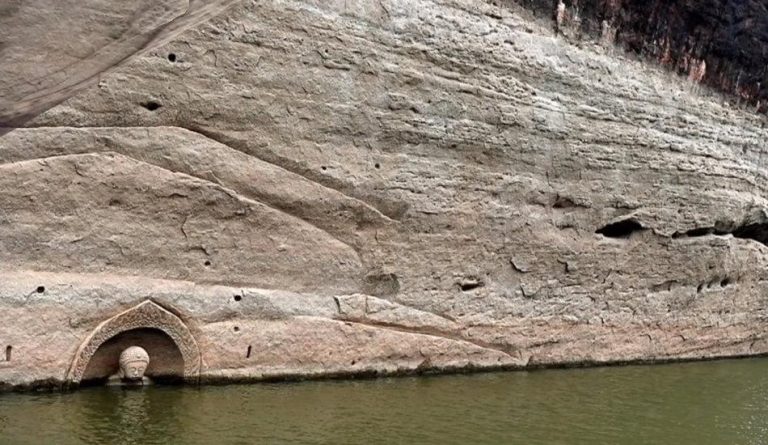 A Buddha statue, possibly dating back to the Ming Dynasty, emerged in China’s Jiangxi Province. (Image: Screenshot via YouTube)

As the Earth moves through its phases, land masses keep rising to the ocean’s surface and falling back into the deep once again as water levels drop. This may happen for entire continents as well as for smaller regions. It may happen over millions of years, or, like in the manmade cases we’re about to see, in just over half a century.

Discoveries made due to falling water levels

Back in the 1940s, there used to be a village in Central Italy by the name of Fabbriche di Careggine. An old village, it was first founded in the 13th century in the province of Lucca in Tuscany.

In 1947, a dam was built on the Edron River and the village was flooded under the artificial lake that was created, Lago di Vagli. The residents all evacuated to nearby towns. In the years 1958, ’74, ’83, and ’94, the lake was drained, and it is expected to again be emptied next year in 2021. When this happens, tourists flock to the site to catch a glimpse of the long-lost village.

In the southern state of Chiapas, Mexico, a church built by Spanish colonists in the 16th century has resurfaced due to the receding water levels of the Grijalva River. There is currently a drought in the region. This is the second time locals have been able to see the church.

Archaeologists have pointed out that the church was built in 1564 by evangelical Dominican friars. The Malpaso Dam was constructed in 1966, following which the church was flooded by rising water levels.

A reservoir recently dried up revealing a temple that had been submerged underwater for 20 years. The villagers left the area when the reservoir began to fill up because of the recently-constructed Pasak Chonlasit Dam.

There were about 700 village homes. It was an emotional moment for the villagers to come back to their homes and be able to visit and provide offerings at the temple. Same as before, the ruins briefly re-emerged during the 2015 droughts. The ruins are expected to submerge again after enough rainfall.

Lake Mead has been falling in water level since the droughts began. This has exposed some old ruins, along with a fully-submerged town. Since Hoover Dam was built in the 1930s, the town of Saint Thomas, founded by Mormon settlers in the 1860s, has been submerged underwater. The dam created Lake Mead, the largest reservoir in the U.S. During the last 15 years, water levels in Lake Mead have dropped by 130 feet. With prolonged droughts, the water supply to Las Vegas, Los Angeles, and Phoenix will be disrupted.

Sant Roma was a town in northeast Spain that went underwater back in the 1950s and 60s when General Franco ordered several hydroelectric power stations to be built. River Ter has been released now, and Sant Roma has reemerged along with the village church, a bridge, and farmhouses. Thousands of tourists are rushing in to watch the waters drain out of Sant Roma.

A Buddha statue, which archaeologists claim could be from the Ming Dynasty (1368-1644), has recently emerged in China’s Jiangxi Province. Some renovation work caused the water levels to recede in the nearby Hongmen reservoir.

When investigated, a temple complex was uncovered beneath the waters. Old records show an ancient town here by the name of Xiaoshi. The statue and its intricate carvings are in extremely good condition, with experts claiming the water could have preserved the statue from getting weathered and oxidized.

The Buddha looking over the water has given joy to the many local villagers who see it as an auspicious moment. It is also considered a blessed statue because it was not involved in the large-scale destruction of Buddhist temples, scriptures, and statues that took place during the Cultural Revolution.