Life of China’s Soccer Superstar vs. the Chinese Communist Regime 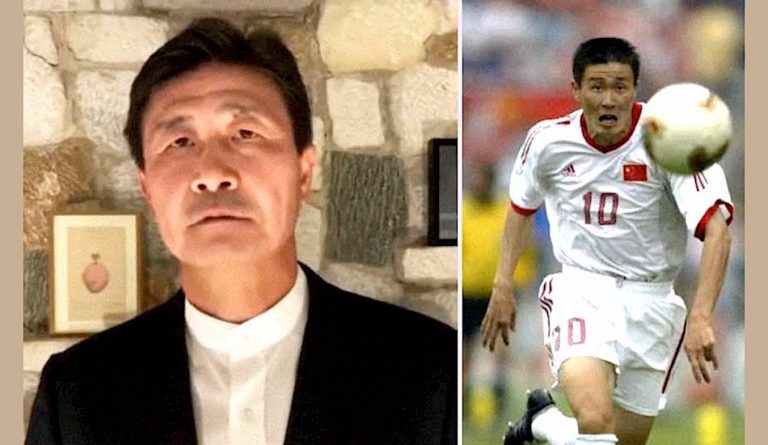 China’s former football superstar and international team player, on the 31st anniversary of the June 4 Tiananmen Square Massacre, made a surprise appearance on YouTube. In two videos, Hao Haidong openly called for the ouster of China’s ruling Communist Party. The soccer icon has once again come into the public limelight to become a hotly discussed topic in mainland China and abroad.

Chinese sports stars are usually obliged to express thanks and support for their government. For any Chinese superstar to make such a call, such a life-changing decision, he or she has to be a very solemn, determined, and fearless individual, as there is no going back. Hao’s denouncement of the Chinese Communist Party (CCP) not only stunned everyone at home, but also shocked those abroad, along with international media. Reuters, The New York Times, and Voice of Germany all highlighted the news. On June 4, the search volume for “Hao Haidong” on WeChat reached nearly 9.87 million hits, but shortly thereafter Hao’s account on Weibo was canceled and everything deleted.

When we look into Hao Haidong’s life under the communist regime, we realize immediately that like so many millions of Chinese people, he was cheated out of his dreams. His potential was quashed. His amazing skills were manipulated and exploited for political ends. Even though he was successful, in reality, he was a political prisoner.

Hao Haidong, born on May 9, 1970, is from Qingdao, in Shandong Province. In October 1980, he was selected for the military Bayi youth soccer team, and six years later he was picked for the adult team. For selection on the Bayi FC team, one must be an active conscript of the People’s Liberation Army. In 1992, he was selected for the national team and participated in the Asian Cup in the same year. His multi-faceted, winning technique was a combination of instantaneous explosive power, skilled footwork and bouncing of the ball, and the cheeky ability to get in front of his opponent at the crucial moment, all with an added burst of speed.

In 1995, Hao was offered the opportunity of a lifetime to join the South American Uruguayan giants CA Penarol. The package deal came with a transfer fee of US$500,000 and an annual salary of US$200,000. At that time, there wasn’t any Chinese player from the mainland on the soccer team of any foreign country. For Hao, this was a fabulous offer and added pride to the country. However, in the end, the offer was rejected by Bayi FC and this was concealed from Hao.

When Hao became aware of the truth, he was shocked. Of course, he was shocked. In January 1997, Hao decided to move to Dalian Shide. In the same year, in the 17th round of the A-League, Hao played in the striker position for Dalian Shide against Guangdong Hongyuan and scored 4 goals to help the team win by an impressive 5-2 margin.

At the age of 28, Hao was at the peak of his soccer career. He was acclaimed for his skills as a fast, accurate passer, and with his wide range of maneuvers and powerful strike, he was, as they say in soccer, able to place the ball in the “back of the net.” As a striker, he could nimbly counter two opposing defensive players. At his peak, whether at the club level or on the national side, Hao was the core player of the team. At that time, Hao was the undisputed best striker in China.

Hao retired in 2005. In his professional career, he played 178 games, in total scoring 97 goals, averaging 0.54 goals. He played 107 games for the national team, scoring 41 goals, and averaging 0.38 goals. As for his professional record, whether looking at Chinese teams or those of other Asian countries, his achievements are excellent.

In 2005, Hao moved to the Premier League team of Sheffield United, England. His jersey number was “39,” but he never played for Sheffield United. This move, to some extent, was to realize his dream of “playing abroad.”

After retiring, Hao did not offer his services as a coach. He served as the Chairman of Tianjin Songjiang soccer club from the end of 2007 to the end of 2012. According to mainland media reports, his worth by then exceeded US$140 million.

Critical of the system

Over the years, Hao often criticized the shady mainland soccer establishment, as well as the incompetent and corrupt Chinese Football Association. He also raised his voice on behalf of the disadvantaged. This is unheard of in China and this was how his nickname “Cannon Hao” came into being.

Given the poor performance of Chinese soccer for many years, Hao bluntly said that it is a problem of the system. He even said: “There is no one in the Football Association that really understands football. They are all merely field players and only know how to fish for political rewards.” He decried that “even the national team has been manipulated. What then can they be good for?”

On the 31st anniversary of June 4, Hao, who now resides in Spain, openly swore allegiance to the “Federal State of New China,” a proposed alternative to the ruling CCP. He said that “the CCP’s totalitarian rule in China ignores human rights, rule of law and religious freedom and has developed into total anti-humanity atrocities.” He vowed that “to eliminate the CCP is the need of justice” and called upon China and people all over the world “not to be enslaved by the Communist Party.”

Hao’s wife, Ye Zhaoying, who was a two-time badminton world champion, feels helpless about China’s current system. She also openly said: “I am glad my husband and I are very consistent in political views. We have a common ideal, that is, to see the downfall of the evil Communist Party, and it is only then that the Chinese people can truly live a life of freedom and there will be rule of law. This day will come soon.”

Ye Zhaoying also said: “In fact, there will always be people who stand up. If we don’t stand up, others will stand up. This opportunity is given to us by God.”

Ye Zhaoying attracted the attention of the outside world when she revealed that in the 2000 Sydney Olympics, her coach Li Yongbo once pressured her to lose to her teammates in the semi-finals in order to let the Chinese team fight to win the gold. In this regard, she said she was sad and helpless and had no choice but to obey. In the end, the Chinese team won the gold medal and Ye Zhaoying only won the bronze medal. After the Olympics, she was still only 26 years old, but she announced her retirement.