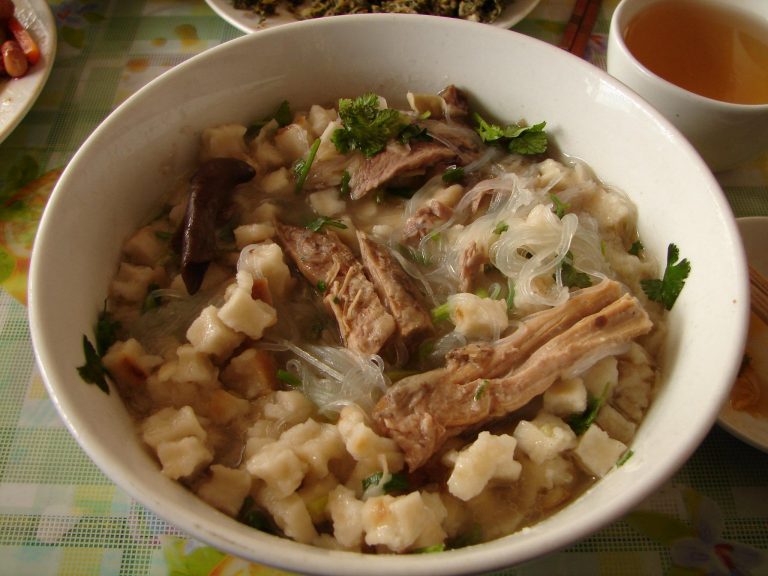 One of the “Four Great Ancient Capitals of China,” Xi’an was the most important city during Tang, Sui, Qin, Western Zhou, and Western Han dynasties. Then called Chang’an, this is where the Silk Road started, and where you can find the Terracotta Army. With a population of almost 13 million, Xi’an is one of the megacities in China. With such a rich history, you can expect to see some of the finest cuisines and famous foods of China in Xi’an. Let’s take a look at a few of them.

Xi’an’s very own mutton stew served with pinched bread. Locals swear by it and tourists love it. There are customs to follow when having your Pao Mo. Pao Mo isn’t just something you order, and then sit back. You will be asked to break the bread into a bowl. Once broken, the bowl is taken inside the kitchen, where the chefs pour in noodles, spices, bone stock, and slices of lamb. They, then, cook it over a flame before serving. But there’s a catch. It’s said that chefs in traditional outlets will inspect your bread, and if they find that you’ve not taken time to break it properly, they, too, will likewise not invest time in cooking the broth properly.

Served cold with a variety of sauces, this is a type of noodle dish made typically from rice flour. It’s said to hit basically all flavor categories. The flour is first mixed with water and strained until gluten remains. It’s then steamed and cooled. Thin strips are cut off and placed in a bowl with bean sprouts and sliced cucumber. Then, sauces like chili oil, vinegar, diced garlic, and pepper powder are added. With a silky texture and tangy flavor, the cold noodles are usually served along with Roujiamo, a Chinese hamburger — white bun filled with shredded braised meat. When done well over a traditional furnace, the bread is crispy and the meat is tender.

Also known as soup-filled buns, the dumplings are filled with meat along with gravy. There is a Shanghai version of the dumpling, but Xi’an locals will claim theirs to be the better of the two.

Unlike pork used in Shanghai, here the dumplings are filled with lamb or beef. The thinly covered dumpling enclosing hot savory soup is a pure delight. Combine this with Xi’an’s special vinegar sauce and chili dip, and you are in for a ride.

Popular throughout the province, these noodles are one of the “eight strange wonders of Shaanxi.” They look like a belt and are handmade. Due to the cold winters typical in this part of the country, the noodle accompaniments are often red peppers. Biangbiang noodles are made long, and one noodle can fill up a bowl. Oil and eggs are added to the dough during preparation, and so the noodles are rather chewy in texture. Hot oil, vegetables, and meat are added before serving.

The best Fen Zheng Rou is found in the Muslim Quarter; it’s basically chunks of rice flour or wheat powder with steamed beef pieces mixed in with spices. Served with buns, and sometimes raw cloves of garlic, it’s made to suit individual taste preferences. You can add in sweet potatoes, mushrooms, and lotus roots.

So next time you drop in to visit Xi’an, make sure you check out some of the exquisite food offerings they’ve got going on there. And let us know how it went.