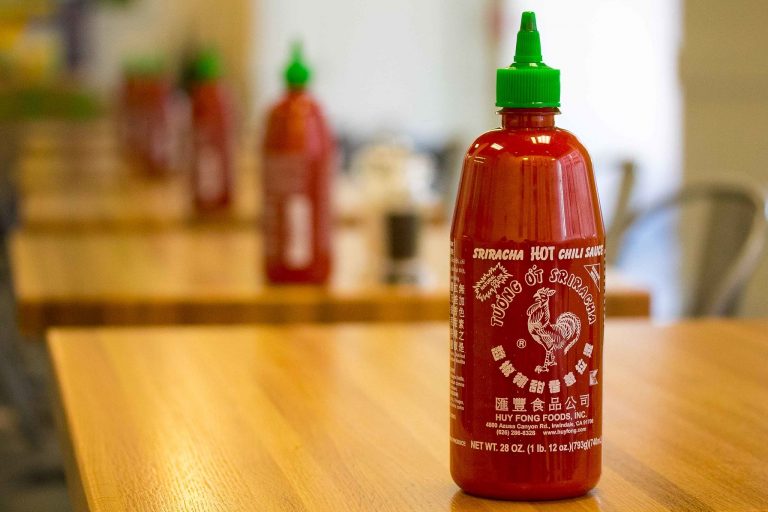 Sriracha is the premium chili sauce enjoyed by everyone. (Image: Stephen Depolo via Flickr CC BY 2.0 )

A Vietnamese immigrant landed on U.S. shores. Among all the difficulties he faced from leaving his familiar environment, people, and food, he could not come to terms with missing one thing — hot sauce. He asked around but none could help him; all Vietnamese compatriots here, on this side of the world, we’re facing the same difficulty.

So he did what any good U.S. immigrant does — he started his business on a fertile soil that has helped thousands of entrepreneurs from all over the world. And that’s how, 33 years ago, David Tran started Huy Fong Foods in Los Angeles, the company that introduced the famous Sriracha sauce to the Western world.

You see all the business moguls and flashy entrepreneurs from Silicon Valley, and you’d have to rethink your concept of a successful businessman when you meet with Tran. Tran has all the trappings of a typical, conservative, Asian merchant from a time long past, with an attitude long forgotten. When asked by an online publication what drove him, he replied nonchalantly: “To make enough fresh chili sauce so that everyone who wants Huy Fong can have it. Nothing more.”

Sriracha is popular in households around the world now, with the original Huy Fong version treasured by chefs and hoteliers. Tran’s version of the Thai sauce made with fresh jalapeno peppers, vinegar, garlic, salt, and sugar is delivered to multiple locations within the country through 10 distributors.

The same distributors also supply the treasured flavor to outlets in Canada and Europe. But you won’t get any more details from Tran, who claims he doesn’t know where all the distributors are selling his sauce. He just knows that Huy Fong Foods has had stellar demand and doubling growth ever since he started 3 decades ago.

The most interesting thing: All this growth has been accomplished without a single salesperson. Tran says that he can’t advertise because the demand would grow considerably too large for him to supply. All the usual chili sauces are made from dried chilis, whereas Sriracha is made from fresh chilies.

The harvest season, which lasts for 10 weeks, provides for the entire yearly requirement for Huy Fong Sriracha. Tran is not a person to compromise on quality. The company has a single supplier who’s been supplying them with chilies for the past 20 years. And Tram claims it’s difficult to find land to grow high-quality chilies. All these constraints have led him to not advertise his sauce, unlike all the other brands.

The origin of Sriracha

Sriracha does not have a clear history. One story takes us back to the 1930s when a Thai woman, Thanom Chakkapak, in the town of Si Racha made the sauce after getting inspired by Burmese sawmill workers. The workers used to buy ingredients for the sauce from her grandmother.

Thanom learned the technique and made the sauce to sell, as well as for her household uses. A customer began to buy large quantities of chilies, salt, and vinegar from Thanom and made Sauce Si Racha Traa Phukhao Thong (Golden Mountain Brand Si Racha Sauce).

Another story tells the history of La Orr Suwanprasop, who was from Sri Racha, Thailand. After getting married and moving to Thailand, she began to make the sauce for her friends. They encouraged her to start a business. She went to seek the blessings of a monk before starting the business, and it was he who recommended her to name the business after her hometown.

The year was 1932, and Suwanprasop was busy selling her sauce to restaurants all over Bangkok. They applied to the food department for establishing their status as creators of the Sriracha sauce, but by that time, several copycats had already been established in the market.

Coming back to Tran, he has, by now, refused several investors and outright buyouts of his company. He complains that they were all after profits, and were not interested in the product. Because of this, he rarely meets with the press or sits for interviews. This is a man who cares for his product, and nothing else. And that shows in the sauce.