China Is Destroying the Tibetan Language 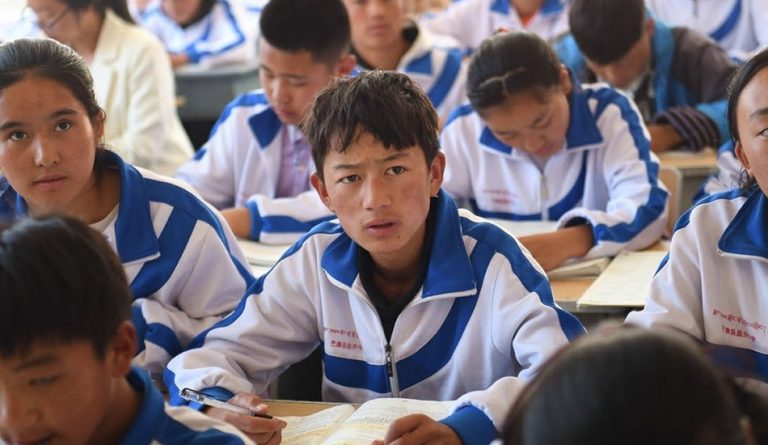 Human Rights Watch warns that China is pushing the Tibetan language to extinction through its policy of bilingual education. (Image: Screenshot / YouTube)

A recent report by Human Rights Watch warns that China is pushing the Tibetan language to extinction through its policy of bilingual education. The policy has been implemented in the Tibetan region for more than a decade and has fostered the growth of Chinese language schooling at almost all education levels, sacrificing the study of the Tibetan language in the process.

From age 3, all Tibetan children undergo mandatory bilingual kindergarten education filled with state propaganda and a special focus on the Chinese language. This is being done in the name of minority education rights, thereby making the program look like a beneficial one. “China’s ‘bilingual education’ policy is motivated by political imperatives rather than educational ones… The Chinese government is violating its international legal obligations to provide Tibetan-language instruction to Tibetans,” Sophie Richardson, China director of HRW, said in a statement.

Back during 2010-2012, Chinese authorities tried to phase out Tibetan-language instruction in schools from the Qinghai Province. This triggered large-scale protests from school authorities and natives who saw through the plan’s nefarious intentions. Beijing subdued the protests and put the education policy on hold. However, this changed last year when Golok prefecture in Qinghai announced that schools will use the Chinese language as a medium of instruction. In other areas of Tibet, the Chinese government is using indirect tactics to force schools to toe their line.

For instance, Beijing is sending thousands of teachers into Tibet who do not speak the Tibetan language. As these teachers populate schools, authorities are forced to allow them to teach classes in the Chinese language. Beijing supports this activity under the “Aid Tibet” program. Some have raised concerns that kids who learn in Chinese rather than in the native Tibetan language will be at a disadvantage. However, such concerns are swept under the rug, largely due to the fact that Tibetans have no choice but to comply with the policies of the communist regime.

China’s bilingual policy goes against the United Nations Convention on the Rights of the Child and the International Covenant on Civil and Political Rights (ICCPR). Sophie Richardson points out that what China is doing is forced assimilation of minorities and not their inclusion into the mainstream society. She rebuffed Beijing’s claims that making Tibetan children speak Chinese is somehow beneficial for national security.

The issue of the Panchen Lama has also been getting renewed focus recently. About 25 years back, a 6-year-old boy was identified as the Panchen Lama, the second-highest title in Tibetan Buddhism after the Dalai Lama. However, the boy, named Gedhun Choekyi Nyima, soon disappeared. Nyima was handpicked by the Dalai Lama to be the 11th Panchen Lama. But Beijing disregarded the appointment. Instead, the Chinese government hand-picked a candidate of their own named Gyancain Norbu as the “real” Panchen Lama.

In May, the Chinese regime gave an update on Nyima. He is now 31 years of age and is apparently a college graduate with a job. According to Beijing, neither he nor his family wished to be disturbed. Unfortunately, there is no way to confirm whether these revelations are true or just more lies to hide what really happened to him after he disappeared. It is not even known whether Nyima is aware that he was chosen to be the Panchen Lama. U.S. Secretary of State Mike Pompeo has asked Beijing to make Nyima’s whereabouts public knowledge.