Top 10 Countries With the Smallest Armies in the World 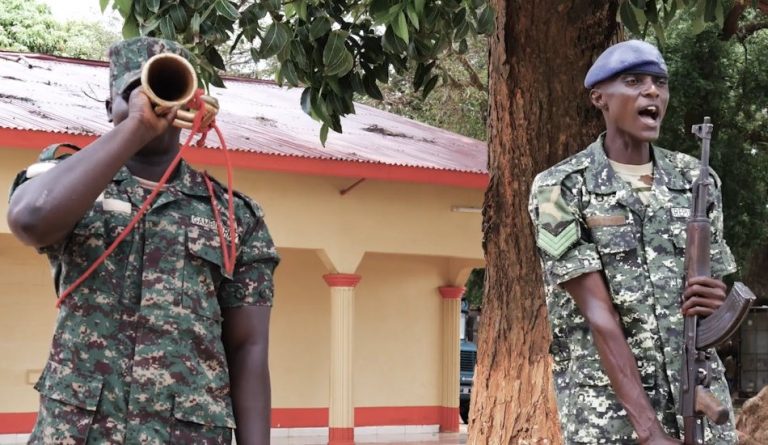 When considering the smallest armies in the world, Gambia comes in at number 10 on the list. (Image: Screenshot / YouTube)

An army keeps a country safe from outside threats. When thinking of an army, the first picture that comes to everyone’s mind will probably be thousands of soldiers marching in unison, followed by tanks and other weapons, with jets flying overhead. However, not every country can gather such an impressive show of force. Some nations just have a few people in their official armed forces. Let’s take a look at some of the smallest armies in the world.

Gambia is a small African nation with a force that consists of infantry battalions, the National Guard, and a navy. The Gambian army has several armored vehicles, patrol boats, and one combat aircraft. This African country has a total force of around 1,100 men, with about 400 military police.

Mauritius is a popular tourist attraction. Around 1.25 million people live on the island. Situated in the warm Indian Ocean, Mauritius is about 1,243 miles from South Africa. The country does not have a standing army. There are two paramilitary units totaling about 1,500 personnel. It has 2 aircraft, 4 helicopters, and 9 vessels.

The island is protected by an army made up of around 1,000 soldiers divided between regular and reserve forces. Soldiers and sailors are responsible for maintaining domestic security, including patrolling the coast to stamp out illegal activities such as smuggling.

Situated in the South Pacific, Tonga is made up of 169 islands, 39 of which are inhabited. Tonga’s military force numbers just about 500 men in total. Tonga has a navy with patrol boats and one patrol airplane. The country is believed to have two aircraft, though their operational status is unclear.

The defense force of Saint Kitts and Nevis has two units — infantry and maritime. In total, it has an active force of 300 personnel, with a corps of 150 cadets. One of the major purposes of the defense force is intercepting the drug trade.

Haiti is a beautiful country with some of the most fabulous beaches in the world. After a series of coups in the ’90s, the Haitian military was disbanded in 1995. However, the country reinstated its military in August 2019 with the induction of 248 soldiers and 15 officers — all trained in Mexico. The Haitian Coast Guard has 19 vessels.

Monaco is one of the smallest countries in the world, with a population of around 38,000 people. The country maintains 255 people in its military, of which 35 of them are civilian employees. The force consists of 10 officers and 26 non-commissioned officers. Most of the officers have done service with the French military.

Antigua and Barbuda is an island in the Eastern Caribbean Sea. The country is known mainly for its fabulous coastline and is a popular tourist destination. It has 245 military personnel, out of which 170 are on active military service and 75 in reserve. The state does not maintain a paramilitary force.

Iceland is the only NATO member that does not have a standing army. The country has deployed 200 personnel with 230 additional people in its reserves. Iceland’s Coast Guard has 4 aircraft and 4 ships. The country maintains security agreements with Denmark, Norway, and other surrounding nations. During World War 2, the U.S. took on the responsibility of defending Iceland.

Vatican City is the world’s smallest country with a population of about 1,000 people. It is a neutral state and does not have armed forces of its own. Its military defenses are provided by the Italian Armed Forces. Inside the Vatican, the Swiss Army, comprised of 135 people, is tasked with the security of the state as well as the Pope. To qualify as a Swiss Guard, the men must be from Switzerland, unmarried, and should have undergone mandatory military service in Switzerland.

So how relevant do you think these countries’ armed forces are when it comes to actual combat situations?