What Is the Socratic Method, and Why Do We Need It Today? 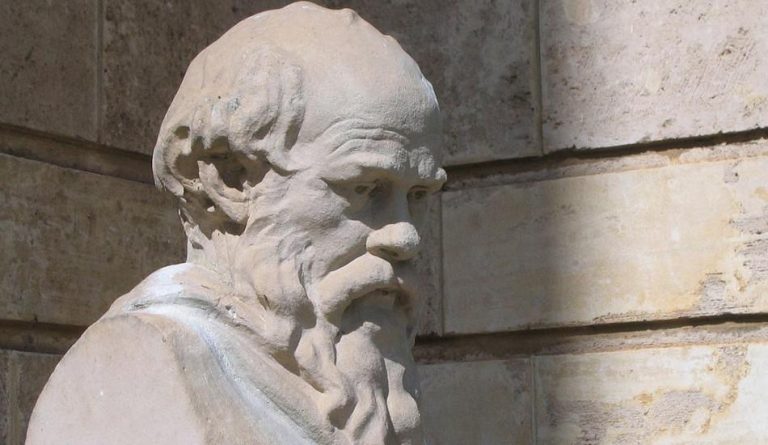 Socrates questioned everything and taught others to do the same. (Image: Greg O'Beirne via wikimedia CC BY-SA 3.0)

Ask anyone who knows about Socrates and they will tell you about his most endearing and at the same time his most scary quality — the ability to ask questions; the most thought-provoking truth-revealing questions. These are the type of questions that would make the person think deeply about the subject matter 10 times more thoroughly than he would have done before meeting the great philosopher. These questions chip away at all the fluff, flimflam, misunderstandings, and misdirection until only the true nature of the question and the questioner remains.

Socrates’ incisive questions eventually led to his death. Like now, ancient Greece had leaders who preferred to have followers who didn’t question anything, but simply obeyed and followed along. The wheels of history turn over and over, and like riding a merry-go-round, man is stuck going in circles repeating past mistakes until he learns from them. But it appears by the look of things that we prefer to remain in ignorance over truly wanting to understand our past. Almost all complications and conditions in human society are repeated and have been dealt with, in one way or another, by those who have lived before us. We only need to look.

What is the Socratic Method?

The Socratic Method (or Elenchus) may be viewed in 3 steps: stating a definition or principle, asking a question that brings up an exception, then stating the definition again with a better, more refined understanding than initially defined. It’s not a method of debate or persuasion, but a dissective discussion that uncovers contradictions and flaws within one’s own understanding, and the challenging of deeply-held notions. The Socratic Method is a creative technique of digging down to the bedrock of reality — layer upon layer of continuously refining our thinking and opinions as closely as possible to perfection. It helps us think logically for ourselves.

It is meant to clear out contradictions within a definition through meaningful questions and steadily perfecting the hypothesis. It’s not so much about knowing what is unknown, but more of understanding what we do not know, uncovering our ignorance. After a Socratic discussion, we know well what we do not know. That is important because knowledge on its own simply makes us arrogant, whereas knowing the limits of our knowledge prevents that from happening.

For example, let’s take a statement: “Creation happened by chance, not by God,” to which a Socrates-studying believer in God might reply: “You believe that creation happens without a creator, so your house came into existence one fine day, just out of the blue?”

This line of inquiry encourages the original proposer of the statement to re-evaluate their definition and make it more precise. This would then, of course, be narrowed down by another question. This questioning or triangulation goes on until both parties have arrived at a place where they might not have gotten the true answer, but they will both be closer to the truth than when they first started. The idea is not to keep going round in circles. It is not a debating module, but a system that helps us uncover our true selves and our wisdom. Some of Socrates’ questions were recorded from memory by his student, Plato, in books like Dialogues and Euthyphro.

Using the Socratic Method ensures your reasoning holds water, that it is sound, that it stands up and is grounded in reality. Use this method to challenge your own hypothesis, as well as your long-held beliefs. You will be better off for it. You will get better at questioning, as well as making better assumptions — the mark of a learned man.

Aristotle, a distinguished student of Plato, said: “It is the mark of an educated mind to be able to entertain a thought without accepting it.” What does this imply? For everything, there are at a minimum, two arguments, or points of view. A learned mind seeks to understand both sides, and then come to an informed decision, instead of just basing his conclusion on one perspective. People who argue from one side of the aisle usually do that from a place of emotion, not logic.

It is popular in academia now to refute the idea of God. The Socratic Method was not meant by Socrates for refuting God or the Heavens. The sage is recorded to have said: “How wisely is the ear formed to receive all sorts of sounds, and not to be filled with any to the exclusion of others.”

He questioned his students about whether the marvels of life, and its minute intricacies and details, which are found replicated throughout all corners of the universe in an orderly manner, were done by an intelligent being and not a result of mere chance.

We can understand Socrates’ reasoning that, on an atomic scale, the repetitions indeed abound throughout the known universe. But his discussion is foregone in today’s classrooms, where only the most crude and superficial meaning is taken into account, and further questioning is often discouraged.

It would do the human society well to bring the Socratic Method back into effect and reasonably question the different perspectives of every argument and point of view, and try to discover the path to truth. How ironic that Socrates lives on in spite of the poison.