A Sanctuary in Vietnam That Protects Moon Bears 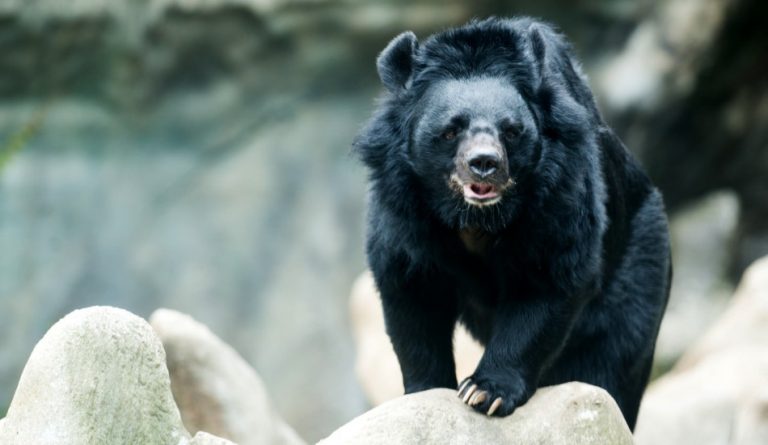 In Vietnam, moon bears, also known as Asiatic black bears, have been hunted for centuries for medicinal purposes. These animals are kept in captivity to extract their bile, which many believe is capable of increasing a man’s fertility. The Tam Dao Bear Sanctuary near Hanoi tracks, rescues, and rehabilitates moon bears, providing them with a safe place they can live in peace.

There are an estimated 1,000 bears in captivity across Vietnam. While this is definitely a big number, it is a far cry from the 4,000 bears that were held in bile farms in 2005. In China, where bear bile farms are still legal, the situation is much worse as some suggest that the number of captive bears might be around 10,000. Organizations like “Free the Bears” and “Animals Asia” are working hard to rescue the captive bears and have been successful to some extent.

The Tam Dao Bear Sanctuary is operated by Animals Asia and has the capacity to house about 200 bears. However, a big problem is that since these animals have grown in captivity, they are not likely to survive if released in the wild. As such, these bears are only safe as long as the organization is properly funded. In bear farms, the bile extraction procedure is extremely taxing on the creatures. Most of the bears end up catching diseases or getting tumors that eventually kill them. And if they do survive, they become useless once old and are left to die in the cages. Those who live until old age are kept in small cages.

While the ursodeoxycholic acid present in bear bile does offer some medicinal benefits, they are not so significant that these animals have to be treated in such a horrible way. There are several synthetic and natural medications available that do a much better job. However, the mythical status of bear bile ensures high demand, which makes it pretty difficult to end the trade.

“We do a lot of school trips… When the children see that this is an animal with a personality and that it does feel pain and it does feel sadness, then they know that they don’t want to buy something that would hurt that animal… We also try to educate the older generations that bear bile isn’t a miracle cure, and that there are cheaper and more effective herbal and modern medicines,” Mandala Hunter, Senior veterinarian at the sanctuary, said to Urbanist Hanoi.

The Tam Dao sanctuary is spread over an area of 27 acres. Nearly a third of the space consists of semi-natural outdoor enclosures that have been specifically designed to encourage the bears’ to be at their natural comfort. Back in 2015, Animals Asia signed a memorandum of understanding (MoU) with the Vietnam government to rescue almost 1,000 bears that are held in captivity in the country. Another MoU with the Vietnamese Traditional Medicine Association aims to remove the use of bear bile in prescriptions by this year.

Other activities in Tam Dao

If you plan on visiting the Tam Dao sanctuary, do keep in mind that there are other nearby places you can explore. For instance, the Tam Dao National Park covers an area of more than 139 square miles and is filled with lush, evergreen forests all year round. The park houses rare species like the snake-head fish, gray langur monkey, silver pheasant wood grouse, and so on.

The silver waterfall in Tam Dao is considered one of the most beautiful in the region. Falling from a height of about 165 feet, the waterfall is said to give a fairytale-like feeling. If you love to hike, you will find Tam Dao an ideal place for the activity. The best time for hiking is during the September-January period as the temperature is moderate and there are fewer rains.