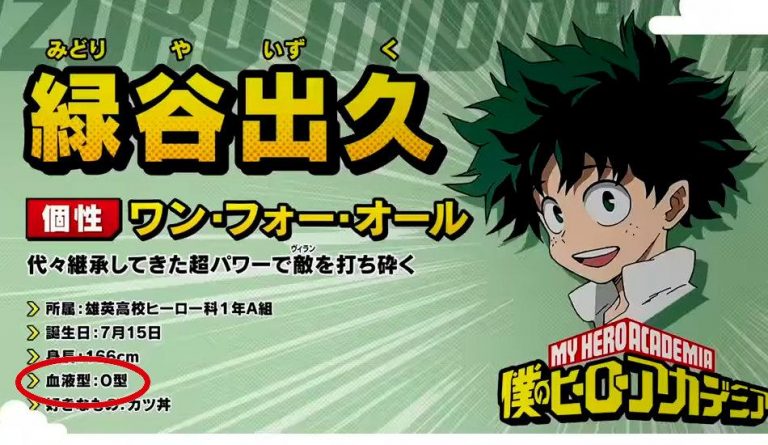 Have you ever wondered why in some Japanese anime and mangas, a character’s blood type is included in their profile? (Image: Screenshot / YouTube)

For those who love watching anime, have you ever wondered why in some anime and mangas, a character’s blood type is included in their profile? Sure. Blood type is important in the medical field. But what’s the catch? Why would people need or want to know that about the character?

Most of us common folks find out about our blood types when we go for a check-up. And many of us don’t even bother to remember it unless we want to donate blood. But in Japan, a person’s blood type is more than just that. There, personalities and traits are thought to be based on blood types.

Blood types or blood groups are classifications of blood based on the presence or absence of either one or both the A and B antigens on the red blood cell’s surface. The four major types are A, B, AB, and O.

Having A antigens in your blood means your blood group is A, while the presence of B classifies you into type B. When both antigens are in your blood, then you’re AB. You’re a person with blood type O if you don’t have either of the two.

It is common for the Japanese to ask what your blood type is because knowing whether you’re A, B, AB, or O will give them an idea of what your personality is.

Blood type personality theory is immensely popular in Japan. It started with psychologist Furukawa Takeji’s 1927 paper The Study of Temperament Through Blood Type. The researcher observed groups of students working in a women’s high school administrative department, and later noticed the distinct differences and similarities in personalities. Though the international community disregards the correlation between blood type and personality, the Japanese firmly believe in it.

Blood type A is the most common type in Japan’s population. Kichōmen, or well-organized, is the predominant trait of people with this blood group. They are stubborn, easily stressed, and are always trying to keep things in order. When it comes to relationships, they like to be in harmony with others.

Japanese people gravitate toward blood type O individuals because they’re rakkanshugi, or optimistic. They’re born to be leaders with extroverted traits, and often flourish when there are challenges. It doesn’t matter if you’re positive or negative — that’s not counted.

“Jikochū,” or selfish, is what the Japanese commonly use to define people with blood type B. They like to move around, figuratively. They’re a curious bunch who easily lose interest, which makes them unpredictable.

And finally, the kawarimono, or eccentric, blood type AB individuals who possess traits from the As and Bs. The Japanese believe that such a person is dual-natured and complicated. AB is the least common blood group in Japan and also the world.

Blood type discrimination in Japan takes many forms. If you’re a guy and ask for a Japanese woman’s hand in marriage, she might turn you down based on your blood-type, especially if you’re AB or B.

When it comes to employment, a 2011 issue of the Asahi newspaper reported on fresh graduates who said they were scared of facing discrimination during the hiring process because they’re blood type B.

This conception is deeply ingrained in their culture. In fact, former reconstruction minister Ryu Matsumoto, who resigned his position because of his offensive remarks to the victims of the earthquake and tsunami in 2011, blamed his rude behavior on the fact that he is blood type B.

Tokyo’s Asia University professor Terumitsu Maekawa told BBC in 2012 about the discrimination faced by minorities who have blood-types AB and B. Bura-hara, or blood type discrimination, is a common situation often faced by these people since they are deemed to have negative traits. “Violent and cruel” or “backward-thinker” are labels used for the indigenous Ainu minority group and Taiwanese minority in Japan, who commonly have these blood types in the country.