Art Review: The Lady of Shallot 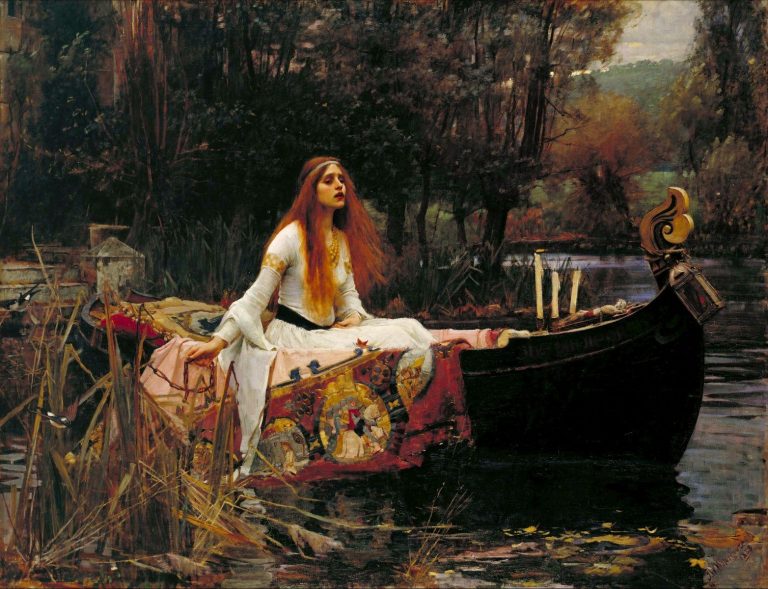 A boat traveling from afar comes to a halt on the shore. Cradled within it is a lifeless woman’s body. A group of knights discovers the boat that drifted from the river and find a paper on her chest: “The web was woven curiously, the charm is broken utterly, draw near and fear not, — this is I, The Lady of Shalott.”

Though confined and isolated within a tower on the island of Shalott, the lady — who’s under an unknown curse — has glimpses of the outside world through a magical mirror. She embroiders the images she sees in the reflection until one day, Lancelot, a handsome knight, appears in front of the mirror.

Allured by the man’s image, the lady gazes upon the window. The mirror cracks; the curse is now in motion. Sensing that her time is dwindling, she leaves the castle and hurries to a boat on a river ending in King Arthur’s palace — which is where Lancelot should be. The hapless woman doesn’t make it, however, and the boat carries her lifeless body into the shore where the knights discover her body. Read the full poem here.

Lord Alfred Tennyson’s The Lady of Shalott poem was inspired John William Waterhouse’s painting of the same name. Waterhouse’s vision ended up being one of the most outstanding oil paintings of all time. The painting of The Lady of Shalott (1888) is a vivid image of Tennyson’s poem. The literary piece, published in 1832, tells the story of a woman, trapped in a tower, who has been doomed to live under a mysterious curse. But because of an image of Lancelot — a charming knight — she sets out to find him, which ultimately ends in her demise. The painter’s reimagination of Tennyson invokes various interpretations thanks to its incorporation of detailed imageries, dark colors, and emotions of both dread and hope.

While Tate Gallery perceives the painting as a presentation of Victorian women’s restricted and domesticated life, and the poem a caution to women to abide by such norms, Eric Bess, an artist and an adjunct faculty at Wittenberg University, sees both the poet and painter’s work as a representation of human imagination.

With a clear fascination toward Tennyson in his work, he poses a question — whether the poet reminds us of the power of imagination. How, without it, we might feel lifeless in our journeys. “And down the river’s dim expanse, like some bold seer in a trance,” the author implies how imagination can place us in a trance that draws courage from within our hearts.

In the same way, the painting also raises the same question. The lady’s head is turned toward her destination — the place of her imagination (of the knight). The knights; are they accompanying Sir Lancelot, or are they just passers-by?

Her mindlessness of the chain in her hand, as if she had finally put her long confinement in the tower behind her and neglected the severity of her curse, all this makes us even wonder more about the power of imagination.

“The web was woven curiously, the charm is broken utterly, draw near and fear not, — this is I, The Lady of Shalott,” with that line, Bess sees two interpretations from both artists: a warning about the dangers of imagination or its potency of providing us with the courage to face our fears.

He explains that our imagination stirs strong desires that can lead us to dangers. The lady of Shalott is inspired by the images of the “real” world and weaves it with great curiosity. And this strong fascination and wonder eventually push her to seek the “real world.” She pays no mind to the consequences and ends up suffering for it.

Or is that the end of her suffering? The other meaning suggests that imagination gives us the power to deal with dangerous possibilities, even certain death. The lady’s request to “draw near” may suggest, according to Bess, for us to face our fears and the notion of death.