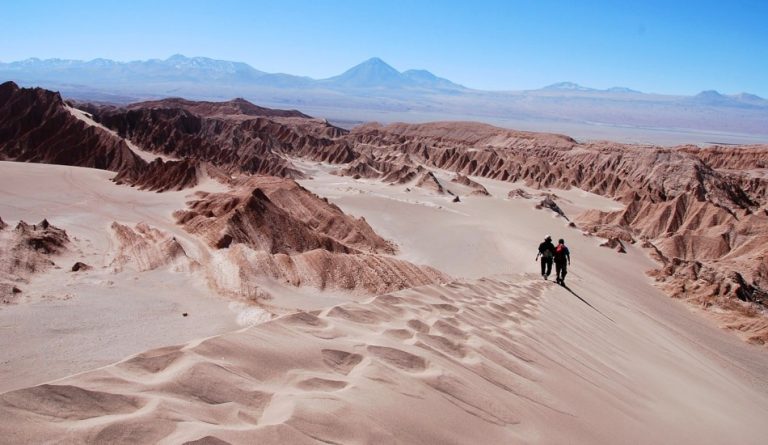 The Atacama Desert in South America is the driest place on Earth. (Image: LuisValiente via Pixabay)

The Atacama Desert is the driest place on Earth according to NASA studies. Spanning from southern to northern Chile, it is so dry that the average precipitation is less than one-tenth of an inch per year. Some weather stations in the region have never reported any rain. And those that reported an occurrence did so over a period of four years or more between rainfalls.

Day and night here are extreme opposites when it comes to temperature. It can reach about 104ºF during the day. And at night, the cold bites with a temperature of 41ºF.

But there is more to the Atacama Desert than meets the eye. Check out some interesting facts we gathered about the Atacama.

A wealthy supply of sodium nitrate

When you visit the region, you’ll find many abandoned mining towns that quarried sodium nitrate, also known as Chile saltpeter, in the 1940s. In fact, the Atacama Desert carries so much of this resource that it is considered the largest natural supply of sodium nitrate in the world. Manufacturers use the alkali metal to produce fertilizers and explosives among other things.

NASA has been gearing up for Mars exploration missions. But before they initiate planetary expeditions, they need to do some testing first. So where do they go?

Besides the hot and arid temperatures that make the Atacama Desert a good site to replicate the red planet, its soil samples closely resemble that of Mars as well. NASA instruments conduct initial assessments here before being deployed to Mars. The desert is officially the testing site for the Earth-Mars Cave Detection Program.

A place to call home

Though the conditions in the region make the survivability rate extremely low, there are actually a lot of people living in the desert. Approximately 1 million people can be found in the coastal fishing villages, oasis towns, and mining areas. These people grow olives, tomatoes, and cucumbers as well as herd alpacas for a living. Copper is also abundant in the region, which makes copper mining popular.

Some animals also thrive in the desert. Grey foxes, red scorpions, butterflies, and desert wasps are some of the beings able to cope with the desert’s extreme conditions. Surprisingly, penguins, pelicans, and sea lions can be found nearer the Pacific end.

A mummy is a dead human or animal whose body has been preserved either intentionally or accidentally through chemicals, cold temperatures, and so on. The earliest mummy was discovered in Egypt, which dates back to around 3000 B.C. But the oldest mummy was actually recovered from the Atacama Desert. The Chinchorro mummies have been around from about 7000 B.C., predating the Egyptian discoveries. Chinchorro people used to mummify their unborn babies. This may be due to the harsh environment, which makes survival extremely difficult.

While there are five distinct Chinchorro mummification styles, the black and red mummies were the most prevalent. The technique for the black mummies involved disassembling the body, treating, and reassembling the body parts, including the skin. The red one was created by making small cuts in the body, removing the internal organs, and letting the body cavity dry.

People living in the Atacama Desert get to experience more than 300 days of clear skies in a year. It is one of the few locations in the world that has this kind of phenomenon. Because of this, the region is an ideal spot to conduct astronomical observations. Just recently, the Atacama Large Millimeter/submillimeter Array (ALMA) was established. And the astronomical interferometer of 66 radio telescopes has successfully aided the studies of star formations.