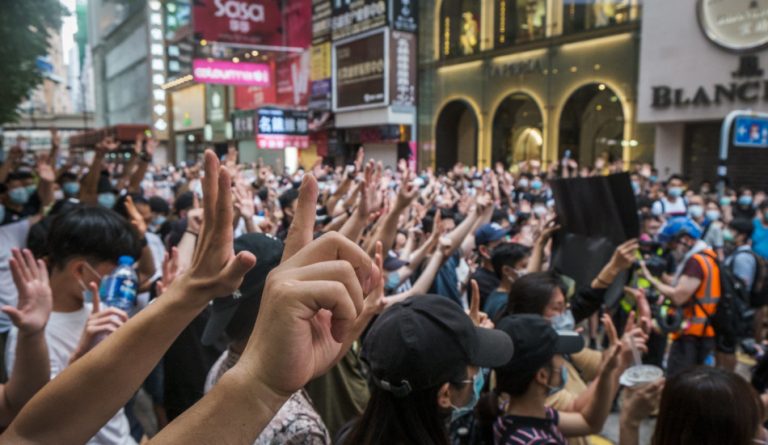 The violent protests in Hong Kong have their roots in the intense, long-term animosity between Hongkongers and mainlanders, which baffles many Westerners. (Image: Studio Incendo via flickr CC BY 2.0 )

With the National Security Law in effect, Hongkongers faced the question of whether or not to carry on with the July 1 parade, an annual event marking the 1997 handover of the city from the UK back to China. To begin with, this was the first time that the people of Hong Kong did not receive a notice of “No Objection” from the police since the transfer of sovereignty took place. The parade itself was not even recognized, which meant that once arrested on the street, there was a certainty that people would be prosecuted for “illegal gathering.”

Second, this year’s July 1 parade is the day when large-scale crowd gathering was almost certain to occur after a year of the anti-extradition movement because that day was too critical and too symbolic. In addition to being the 23rd anniversary of the transfer of sovereignty, the ignoble National Security Law against Hong Kong came into force one hour before July 1, 2020, that is, 11 p.m. on June 30. Ahead of the march, it was reported that 5,000 police officers had been deployed in advance, ready and waiting.

Third, the new National Security Law now in force is so vague and all-encompassing that the Chinese Communist Party (CCP) can interpret it any which way they want and even make it up as they go along. Article 24 states that arson, blocking traffic, and interference with traffic are now classified as terrorist activity.

This means that Hong Kong people peacefully demonstrating or setting up roadblocks to block roads are falling right into the trap. Article 29 states that anyone who goes out on the streets to protest for democracy and freedom, no matter how they do it, will be regarded as being engaged in illegal activity.

The “Internal Law Enforcement Guidelines” of the Hong Kong Police have already specified that waving banners with slogans such as “Liberate Hong Kong, Revolution of Our Times,” “Hong Kong Independence,” “Hong Kong Independence — The Only Way Out,” “Hong Kong People Establish a Nation,” and so on, or shouting the corresponding slogans, are all now regarded as “acts endangering national security.” So the police can arrest people without any warning. According to the “internal guidelines,” if your protest involves any of the above, the police can take you away.

Even singing Glory to Hong Kong is sufficient cause for being arrested. The Secretary for Security of Hong Kong, Mr. Lee Jiachao, said that no matter what acts were involved, the police could make arrests, investigate, and search for evidence under the National Security Law as long as they reasonably believed the law was being broken. Hong Kong has officially come under the rule of the secret police, and there is no democratic freedom under the terms and definitions of the National Security Act (NSA).

And the most frightening of all is that if anyone is caught under the NSA law, they may not be entitled to bail, may be subject to secret hearings and interrogation, may be detained in secret jails, and even sent to China: If convicted, they may end up facing a minimum sentence of three years in prison and a maximum of an entire lifetime. This is the new terror created by the Chinese Communist Party (CCP).

Fifth, the toughest part is that everyone has family, school, work, ideals, joys, and sorrows. If they choose to go out on the streets, they are taking great risks. It is a choice between life and struggle.

In this year’s Hong Kong July 1 demonstration, would Hong Kong people dare to take to the streets under such dangerous circumstances? Never fear — they came out! Ignoring the intimidation, Hongkongers took to the streets! The outrageous NSA makes restoration of Hong Kong even more essential.

Although there was no police permission, everyone went out of their own accord. There were louder slogans and more banners of “Liberate Hong Kong,” “Liberate Hong Kong — Revolution of Our Times,” including “Heaven Will Destroy the CCP!” People sang the familiar melody Glory to Hong Kong on the afternoon of July 1.

Hong Kong people told the Chinese Communist Party with deeds that “the people do not fear death, so death threats are worthless.” Even if there are 10,000 national security laws, the CCP will never be able to suppress the resistance of Hongkongers. Don’t look upon July 1 as the day the Chinese Communist Party and the Hong Kong government were able to suppress the people, rather, see it as how tyranny has shown its weakness.

As the parade began, more and more people gathered in Causeway Bay shouting slogans, ignoring police warnings. They shouted loudly: “The five demands are indispensable” and they made corresponding gestures of protest. All along the peaceful procession, crowds filled the road, recreating the heroic scenes during the anti-extradition period. The people of Hong Kong were using their God-given power to reject the law and the CCP’s tyranny.

The locals in Hong Kong who did not take part in the parade witnessed and applauded the great support and surge in public opinion and experienced this historical event. On July 1, the streets were full of people, from Causeway Bay to Admiralty. It is estimated that more than 1 million people took part. When the front end of the procession reached Admiralty, the back end was still in Causeway Bay. There was no broken chain of support anywhere. A large number of people traveled from Causeway Bay in the direction of Wan Chai.

Around the location of the Goose Neck Bridge, the police sent water cannon trucks to drive the crowd away, and people left the road to escape the torrent. During the day’s demonstration, police used tear gas and clubs, and ran after and chased protesters on the streets trying to drive away the people taking part in the protests. The worst violent clashes took place between 6 p.m. and 8 p.m., in the area from the Goose Neck Bridge to Times Square, where large crowds of protesters gathered.

The police crackdown became more aggressive. They rushed into the Times Square area, outside the Times Square mall, and began to fire pepper spray and use gunfire. Reporters and protesters at the scene fled into the mall. Some female journalists were escorted away by their companions. There were 370 protesters arrested on July 1, 10 of them for violating the NSA.