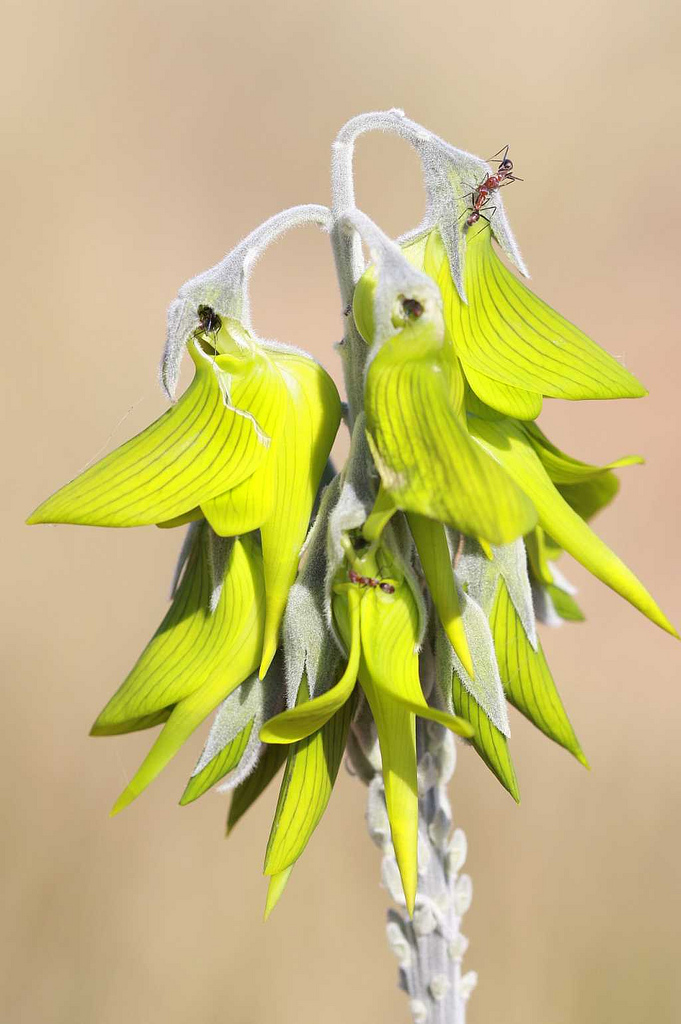 The regal birdflower looks like a hummingbird. (Image: Berichard via Wikimedia Commons)

Nature has a way of tricking us with its illusory visuals. If you love these pleasing extra-species resemblance, then check out this hummingbird flower in Australia.

There are some unique plants that look just like animals. For example, the giant leaf insect, Indian oakleaf butterfly, and Malayan leaf frog to name a few. In Northern Australia, a native flower in the country, when it blooms, looks exactly like a hummingbird.

The green or regal birdflower, scientifically known as Crotalaria cunninghamii, belongs to the legume family Fabaceae. Its name is dedicated to the 19th-century botanist Allan Cunningham.

The hummingbird flower shrub stands at a height of 3 to 4 meters, and its branches and foliage are covered in a hair-like structure. When the perennial shrub blooms during the spring, its oval-shaped leaves give way for the greenish pea flowers to stretch their magnificence. Streaked with black lines, it is as if the flower is drawn by nature to resemble a hummingbird in flight. When viewed from afar, it looks like an image of birds packed and flocking on the branches of the plant. But look closer and the flower’s faux beak is actually the calyx attached to the stem.

Besides its unique appearance, the plant has some medicinal properties as well. According to the Australian Native Plant Society, its sap is used by the aboriginal natives to cure eye infections. The regal birdflower is a rich source of fiber as well.

In March 2019, the regal birdflower was featured by the Australian Botanic Gardens and Park Authority as the in-season flower of the month. But it soared to prominence when Reddit user OctopusPrime posted an image in the community last year. The photo showcased the flower up-close and stirred debate, generating 48,000 upvotes and 400 comments.

Many discussed how the plant mimics a tiny hummingbird. Others pointed out that it only resembles the bird at a certain angle, posting photos to prove their claim. Some people dug more into how users view the image, and whether it’s Batesian mimicry (animals that replicate plants) or pareidolia (tendencies of humans to pick up patterns from unrelated objects), or a simulacrum (a representation of an object or being).

A postdoc scientist studying flower evolution eventually joined in the discussion and supplied the confused users with the origins and nature of the plant. “The fact that the flower looks like a bird to humans cannot have evolved adaptively, because as a ‘signal receiver,’ there is nothing humans could have done to increase the fitness of individuals that evolved this signal (to look like a bird),” commented the postdoc scientists under the username SolitaryBee.

He also clarified that it is unlikely for the flower to intentionally resemble a bird to attract another kind of receiver. He further stated that non-human observers cannot discern the plant as a bird.

The regal birdflower, or hummingbird flower, mostly thrives in the Mulga community and sandy dunes. The plant can survive in hot climes, so long as the sand is well-drained and sunlight aplenty. It is best to keep the plant indoors during the wintry season, though.

After scraping the seed coat and immersing it in warm water for a whole night, the plant will germinate after two weeks. If you have the hummingbird-shaped plant already in your home, then it’s best to grow new plantlings through cutting. It is also possible to grow the perennial hummingbird flower shrub in the U.S. in USDA Hardiness Zones 10 and 11. These include tropical regions like Southern Florida, Southern California, and Hawaii.