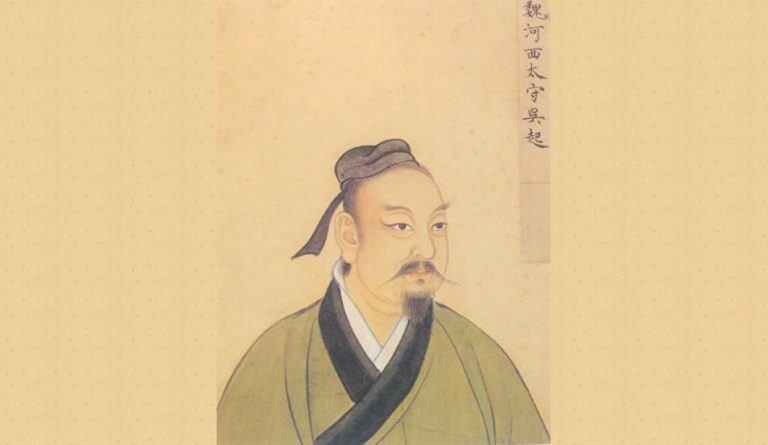 Wu Qi was a well-known military strategist during the Warring States Period in China, but he never met a virtuous master who appreciated him. On one occasion, Wu heard that Wei Wenhou was virtuous, so he went to visit him to ask him to take him on as a military leader.

Wei hesitated over whether to put Wu into an important position and asked the minister Li Ke: “What do you think about Wu Qi?”

Li said: “I heard that Wu is greedy for power and has a low character, but he is outstanding in leading troops to battle!”

“If so, let him be a general and lead an army, and let’s see how capable he is!” Wei made up his mind to trust and value Wu.

After becoming a general, Wu faithfully trained soldiers for Wei State and stayed with the soldiers day and night. The food he ate and the clothes he wore were the same as those of soldiers. Wu did not lay on a mat when he was sleeping, he did not ride a horse when he was marching, and he did not let the soldiers carry the military food for his meals when he was fighting. He shared hardships and woes

with the soldiers and everyone loved him very much.

One time, a soldier had a carbuncle on his back, bleeding with pus, which was very painful. To cure the soldier’s illness, Wu sucked the bloody discharge from the wound with his mouth. All the soldiers seeing this were moved to tears.

As Wu managed the army well and had outstanding abilities as a commander, he won several battles in succession. Wei was glad that he had put the right person in the right job, and let Wu guard Xihe County, which is between the Yellow River and the southern section of the Beiluohe River, to protect the area against the army of Qin and Han.

Most of the officials on the same boat echoed: “Yes, the mountains and rivers of Wei State are strategically located, difficult to access, and they can really keep our country safe.”

As Wu was straightforward and unwilling to flatter, he bluntly said: “The country’s safety does not depend on how dangerous the mountains and rivers are and how easy it is to defend. It depends on virtue. In the past, the ancient country of the Three Miao Tribes had the danger of Dongting lake on the left and Lake Pengli on the right. The terrain was easy to defend and difficult to attack. However, due to the royal court’s officials being morally corrupt, that country was eventually eliminated by Yu.”

Wu Qi continued, saying: “The Shang Dynasty had Mengmen Pass on the left, Taihang Mountain on the right, Chang Mountain in the north, and a big river in the south. The terrain was really arduous. King Zhuo, who was extravagant and corrupt, indulged in wine and promiscuous behavior and was finally wiped out by King Wu. So the safety and prosperity of a country depend on morality, not on the geographical situation. If the monarch does not pay attention to virtue, even the people in our boat may become enemies!”

After that, Wu’s reputation grew more and more, and he even had the prestige of becoming the prime minister.