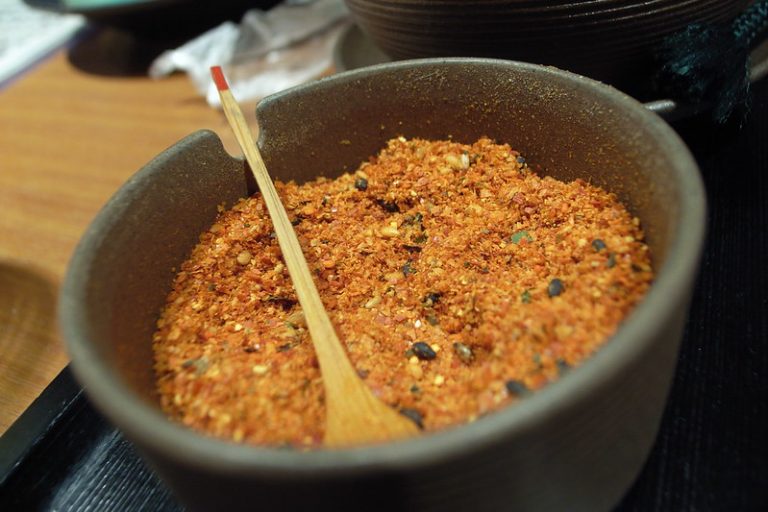 “Variety is the spice of life.” You must have heard this expression many times. Turns out, it is truly more than just a catchphrase. It can also be applied to the foods we eat. Research shows that people who incorporate a variety of food in their diets are healthier, happier, and also live longer. Japanese people have created a particular spice which they love called Shichimi. Seven, in the Japanese language, is “shichi” and “mi” translates to taste. The spice is made with seven ingredients or “seven tastes.”

The Yawataya Isogoro Company was founded by a spice merchant named Kan’emon. It all started in 1736 when he began selling Shichimi Togarashi in the area surrounding the Zenkoji Temple, which is located close to Nishiyama, northwest of Nagano City. It’s well known for producing top-quality hemp.

It was a very active time for merchants who used to carry goods to Edo (Tokyo), and other parts of the country. Nishiyama’s soil was perfect for growing chili peppers, black sesame, ginger, and perilla. But the spice was missing a special flavor, and so orange peel was added. Orange peels were dried and carried from Kamigata.

Yawataya Isogoro was then able to produce a unique blend of 7 spices and called it Shichimi Togarashi. The traveling merchants used to set up small stands in front of shrines or temples where they sold the spice blend. Originally the mixture was first sold in pharmacies for its medicinal properties. Other manufacturers then began to produce it as well.

The flavor of shichimi

Traditional shichimi has black sesame, hemp seed, Japanese pepper, citrus peel, poppy seeds, seaweed, and shiso, an aromatic Japanese herb. The spice is hot because it has pepper as its base ingredient. But there are also hotter blends that use takanotsume, which is known as hawk claw chili pepper. The name comes from the pepper’s pointed shape.

The Shichimiya Honpo Shop, one of the oldest spice manufacturers in Japan, started trading in 1655 in front of Kyoto’s Kiyomizu Temple. Shichimiya’s shop still operates there, selling their own shichimi seven-spice blend, dashi soup stock, and sansho pepper spices.

Traditional Japanese cuisine does not usually include hot spices, but shichimi is nevertheless a well-balanced spice. It’s not like the typical Asian “in your face” chilly condiments like sriracha or sambal oelek. Shichimi is generally used on Japanese noodles, or on rice topped with stewed beef.

The blend is versatile enough to be used in Western dishes as well. You may add it to tuna dishes or chicken salad for a unique tingle. A pinch of the condiment goes a long way as the heat is a slow flavor burn. Available worldwide, you can also try experimenting with the delectable spice. How about adding a pinch to creamy mayo? It has a sweetish nutty taste from the seaweed and sesame.

You can take it a step further, if you like, by adding sesame oil, chili oil, and lime. Shichimi goes very well with salmon, so don’t be shy to slather it on your burgers. Obviously, you can add a pinch in pasta salads or noodles. On roasted broccoli and brussels sprouts, a smattering is all you need to bring out the flavor. You can also mix it with avocado with a squeeze of lime juice on toast for a morning treat. The lime with the citric orange peel will make your tastebuds just pop, and on your fried eggs, it’s perfect. Try it!