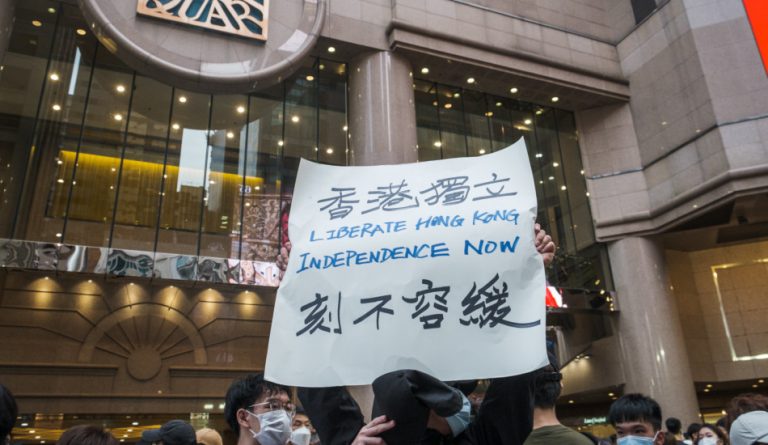 People all across Hong Kong took to the streets on July 1 to oppose the Chinese Communist Party’s National Security Law. (Image: Studio Incendo via flickr CC BY 2.0 )

Since the 1997 handover, July 1 has been a statutory holiday in Hong Kong. Annual protest marches initiated by the Civil Human Rights Front (CHRF) have been held on the anniversary of Hong Kong’s return to China. This year, for the first time ever, the Hong Kong police banned the annual protest march.

At the same time, on July 1, 2020, the Chinese Communist Party’s (CCP) National Security Law came into effect. In the face of the “White Terror,” a large number of people still turned up in the busy Wan Chai district and popular Causeway Bay defying the police ban. They gathered to express their anger over the National Security Law and to resist the tyranny of the CCP. They chanted slogans and expressed their demands. It was a peaceful demonstration. However, riot police had positioned themselves in advance to disperse the demonstrators.

Chen Haohuan, the deputy convenor of the Democratic Front, initiated this July 1 march in his capacity as a private citizen. The theme of the march was “oppose the national security law” and “five demands, not one less.”

Earlier on, Chen Haohuan, in an interview with reporters, said that the people of Hong Kong are very persistent. It may look as if they cannot gather, but from every street in Kowloon to the Central, they are waiting for the opportunity to speak out and this is very touching. He also said that after the implementation of the National Security Law, the people of Hong Kong will have nowhere to retreat and he hopes the people do not give up and continue to speak out.

Hong Kong police said that as of 10 o’clock in the evening, 370 people were arrested, out of which 10 of them were charged with violating the Hong Kong National Security Law and the rest were taken in for “illegal assembly and misconduct in public places.”

In addition, at around 5 o’clock in the evening, a reporter was hit by a police water cannon truck and fell to the ground. Emergency responders immediately stepped forward to rescue the reporter and rushed him to the hospital. At that time, the police water cannon truck was heading toward the junction of Fleming Road in Wan Chai. This caused panic in the people nearby and they hurriedly scrambled into the stores to hide.

The Hong Kong Journalists Association immediately issued a statement that same evening: “Police use water cannon and pepper spray on journalists in Wan Chai. The police did not stop attacking the journalists until they saw a plainclothes policeman with a hand-held camcorder beside the journalists. Some injured journalists reported that they felt pain all over their body.” The Association also strongly condemned the use of a water cannon, pepper spray, and other armed attacks by Hong Kong police on frontline journalists. It has repeatedly condemned such attacks and asked the police to immediately stop obstructing and interfering with journalists’ work and to stop all acts of violence against journalists.

Senior journalist urges people not to be overwhelmed by fear

Cai Yongmei, a senior journalist and former executive editor of Open Magazine, participated in the demonstration. In an interview with The Epoch Times, she said that she felt very sad about the implementation of the National Security Law, so she decided that it was essential for her to come out today to join the march. Cai also said: “We are here for Hong Kong’s freedom. When others want to deprive us of our freedom, we cannot give up. We must assert our determination.”

Cai also pointed out: “The National Security Law is only available in Chinese and there is no English version. Why? The international community is stunned. This is a medieval law, not a modern 21st-century law!”

Cai said that most of the reactions posted on Facebook were out of fear. So she thought that few people would come out today. Nevertheless: “When I got onto the train, I realized that all the people on the train were heading for the street, for the march, and at a glance, I could see that they are all young people.” She expressed further: “I am very excited to see this situation and Hong Kong is still a free port.”

Cai even said: “One of the strategies of the Communist Party is to use fear to intimidate us. The most important thing is that we cannot be overwhelmed by fear.”

Cai Yongmei added: “Our only fear is the fear within ourselves. When the CCP seized power, they committed mass murder to put fear into us so that we will be their servant. When we are fearless, we resist. What they are scared of is that we will stand up and resist.”