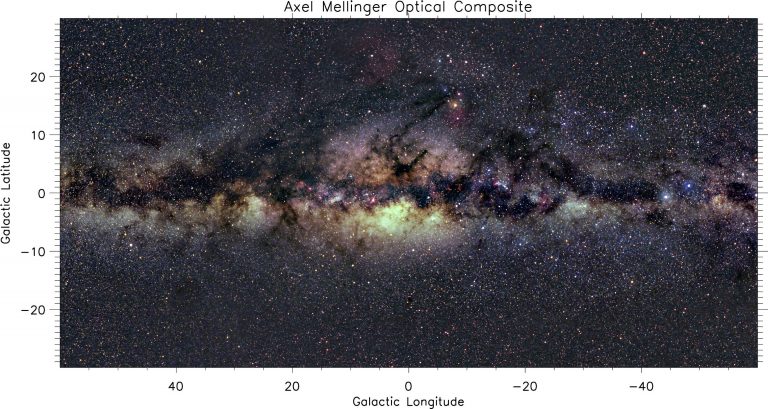 Figuring out how much energy permeates the center of the Milky Way — a discovery reported in the July 3 edition of the journal Science Advances — could yield new clues to the fundamental source of our galaxy’s power, said L. Matthew Haffner of Embry-Riddle Aeronautical University. The Milky Way’s nucleus thrums with hydrogen that has been ionized, or stripped of its electrons so that it is highly energized, said Haffner, assistant professor of physics and astronomy at Embry-Riddle and co-author of the Science Advances paper, explaining:

“Without an ongoing source of energy, free electrons usually find each other and recombine to return to a neutral state in a relatively short amount of time. Being able to see ionized gas in new ways should help us discover the kinds of sources that could be responsible for keeping all that gas energized.”

University of Wisconsin-Madison graduate student Dhanesh Krishnarao (“DK”), lead author of the Science Advances paper, collaborated with Haffner and UW-Whitewater Professor Bob Benjamin — a leading expert on the structure of stars and gas in the Milky Way. Before joining Embry-Riddle in 2018, Haffner worked as a research scientist for 20 years at UW, and he continues to serve as principal investigator for the Wisconsin H-Alpha Mapper, or WHAM, a telescope based in Chile that was used for the team’s latest study.

Peering Under a Tattered Dust Cover

To determine the amount of energy or radiation at the center of the Milky Way, the researchers had to peer through a kind of tattered dust cover. Packed with more than 200 billion stars, the Milky Way also harbors dark patches of interstellar dust and gas. Benjamin was taking a look at two decades’ worth of WHAM data when he spotted a scientific red flag — a peculiar shape poking out of the Milky Way’s dark, dusty center. The oddity was ionized hydrogen gas, which appears red when captured through the sensitive WHAM telescope, and it was moving in the direction of Earth.

The position of the feature — known to scientists as the “Tilted Disk” because it looks tilted compared with the rest of the Milky Way — couldn’t be explained by known physical phenomena, such as galactic rotation. The team had a rare opportunity to study the protruding Tilted Disk, liberated from its usual patchy dust cover, by using optical light. Usually, the Tilted Disk must be studied with infrared or radio light techniques, which allow researchers to make observations through the dust, but limit their ability to learn more about ionized gas. Haffner said:

“Being able to make these measurements in optical light allowed us to compare the nucleus of the Milky Way to other galaxies much more easily. Many past studies have measured the quantity and quality of ionized gas from the centers of thousands of spiral galaxies throughout the universe. For the first time, we were able to directly compare measurements from our galaxy to that large population.”

Krishnarao leveraged an existing model to try and predict how much ionized gas should be in the emitting region that had caught Benjamin’s eye. Raw data from the WHAM telescope allowed him to refine his predictions until the team had an accurate 3D picture of the structure. Comparing other colors of visible light from hydrogen, nitrogen, and oxygen within the structure gave researchers further clues to its composition and properties.

At least 48 percent of the hydrogen gas in the Tilted Disk at the center of the Milky Way has been ionized by an unknown source, the team reported. “The Milky Way can now be used to better understand its nature,” Krishnarao said. The gaseous, ionized structure changes as it moves away from the Milky Way’s center, researchers reported. Previously, scientists only knew about the neutral (non-ionized) gas located in that region. Krishnarao explained:

“Close to the nucleus of the Milky Way, gas is ionized by newly forming stars, but as you move further away from the center, things get more extreme, and the gas becomes similar to a class of galaxies called LINERs, or low ionization (nuclear) emission regions.”

The structure appeared to be moving toward Earth because it was on an elliptical orbit interior to the Milky Way’s spiral arms, researchers found. LINER-type galaxies such as the Milky Way make up roughly a third of all galaxies. They have centers with more radiation than galaxies that are only forming new stars, yet less radiation than those whose supermassive black holes are actively consuming a tremendous amount of material. Haffner said:

“Before this discovery by WHAM, the Andromeda Galaxy was the closest LINER spiral to us. But it’s still millions of light-years away. With the nucleus of the Milky Way only tens of thousands of light-years away, we can now study a LINER region in more detail. Studying this extended ionized gas should help us learn more about the current and past environment in the center of our Galaxy.”

Next up, researchers will need to figure out the source of the energy at the center of the Milky Way. Being able to categorize the galaxy based on its level of radiation was an important first step toward that goal. Now that Haffner has joined Embry-Riddle’s growing Astronomy and Astrophysics program, he and his colleague Edwin Mierkiewicz, associate professor of physics, have big plans. Haffner said:

“In the next few years, we hope to build WHAM’s successor, which would give us a sharper view of the gas we study. Right now our map ‘pixels’ are twice the size of the full moon. WHAM has been a great tool for producing the first all-sky survey of this gas, but we’re hungry for more details now.”

In separate research, Haffner and his colleagues earlier this month reported the first-ever visible-light measurements of “Fermi Bubbles” — mysterious plumes of light that bulge from the center of the Milky Way. That work was presented at the American Astronomical Society.

Provided by: Embry-Riddle Aeronautical University [Note: Materials may be edited for content and length.]