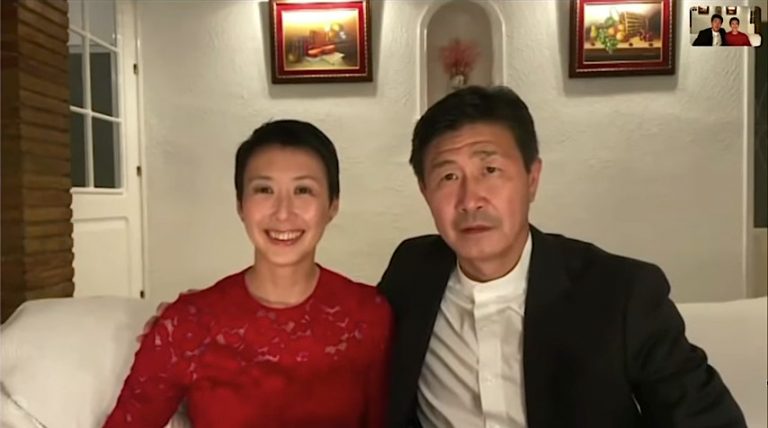 Chinese soccer legend Hao Haidong drew massive attention for his public denouncement of the Chinese Communist Party (CCP) in some recent YouTube videos. Hao and his wife, in an interview with Hong Kong media, said that they witnessed the anti-extradition protest in Hong Kong last year and expressed admiration and support for the Hong Kong people’s persistent pursuit for freedom and democracy: “Hong Kong is the ‘Jerusalem of China’, the holy city in our heart!”

On June 4, the 31st Anniversary of the Tiananmen Square Massacre, Hao and his wife shocked the world by speaking up against the CCP’s totalitarian system and openly calling for the elimination of the CCP on social media.

Hao Haidong is a Chinese former international soccer player and holds the record as China’s all-time top scorer for the national team and in the Chinese league. His wife, Ye Zhaoying, is a former Chinese badminton champion. The couple explained their decision and determination in an interview with Hong Kong’s Apple Daily at their residence in Spain.

Last October, the couple traveled to Hong Kong and stayed for a few days. Hao said that he and his wife had the good fortune to witness the anti-extradition movement. They saw the fight for democracy and freedom of the Hong Kong people and their resistance against the Hong Kong government and the CCP. They saw tens of thousands of Hong Kong people take to the streets for an orderly march.

“They protested only to make their demands heard, but they were crushed ruthlessly by the authorities. It’s like June 4th, making you sad and angry at the same time.”

They believe that the Hong Kong anti-extradition movement was brought about by the erosion of Hong Kong’s freedom and democracy for which the CCP is responsible. It reflects the Hong Kong people’s sentiments toward the authoritarian values imposed by the CCP.

“Young people in Hong Kong risked their lives to fight and voice their demands. I am 100 percent supportive. The rational and disciplined protests shown by the Hong Kong people in the movement, and their persistent pursuit for democracy and freedom is admirable. We saw neither robbery nor looting. They marched in an orderly fashion, passing by many luxury shops without breaking, smashing, or looting.”

Hao also said that the CCP’s suppression of the Hong Kong people is similar to that of the Tiananmen Square incident. He hoped that Hong Kong’s people would press on for “their dignity, democracy, and rule of law.”

On June 4th this year, Hao and his wife publicly announced that they severed their ties with the CCP and made a call to “oust the CCP.” Their public announcement shocked the world, making people wonder why China’s sports figures would go against their communist government.

Hao said: “The Chinese soccer industry is the epitome of the Chinese society.” During his soccer career, he gained a profound realization of the CCP system. “That is an inhumane system that strips people of their humanity. Whoever enters this system will find it impossible to escape; they will either be swallowed or become an accomplice to the system.

“Under this system, everything would be fine as long as you win games. If you lose, you would be facing endless criticizing meetings and reviews: ‘your hair is too long, you sleep too late.’ Even listening to Teresa Teng’s songs was considered a crime because her music was demoralizing!”

Hao said that under the regime, athletes are tools for officials to get promoted. “As long as you win a gold medal, you can do anything you wish. You can break the rules, cheat, and bribe referees. If you don’t win, you are considered ‘filth’ and you will be replaced.”

Hao also cited the tragic example of the Chinese sports industry: “Cai Li used to be a weightlifting champion who once broke the Asian record by winning more than 20 gold medals and gaining the title of Asian No. 1 weightlifter. After he retired, no one cared about him. When he was sick, he was not offered any medical benefits and died at the age of 33, leaving behind a wife and a child in poverty. There are way too many stories like his in China’s sports industry.”

Although Hao and his wife are financially well-off and living a good life today, they feel sorry for their colleagues who are still struggling in poverty.

“The Chinese soccer industry is the epitome of Chinese society. That is the reason why I must stand up to it and expose the CCP’s hypocrisy.”

The CCP is very nervous about the couple

During the interview, Hao revealed that his son was fired from his job. “Three days after we posted our denouncement of the CCP, my son, Hao Runze, called me up and told me that he was fired by the Serbian soccer club. I apologized to him for impacting him because of what I have done.”

Hao Runze told him: “As long as you speak the truth, don’t worry Dad, I support your decision.”

Hao thinks that the CCP will harass his friends and family members or even confiscate their property in China in retaliation. However, any act of retaliation by the CCP will only show the world their evil nature.

“As long as the CCP remains and the evil regime stays in power, we will never return to China. On the surface, the CCP doesn’t appear to be concerned about us severing ties with them. In reality, they are very nervous. Information about us was completely removed from the Chinese Internet. You can see how guilty and insecure they feel.”

Translated by Chua BC and edited by Angela M.