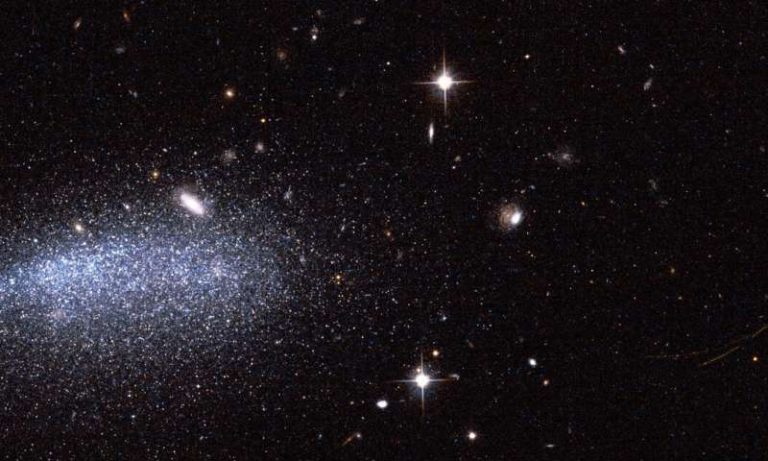 At first sight, this image from the NASA/ESA Hubble Space Telescope portrays the sparkling stars of AGC111977, a dwarf galaxy located around 15 million light-years away and visible in the lower left part of the image. Other galaxies appear sprinkled across the frame, along with foreground stars from our own galaxy, the Milky Way. After closer inspection, something else comes to sight, much closer to home.

Toward the lower right corner of the frame, two elongated streaks are faintly visible: the trails of asteroids — small rocky bodies in our Solar System — crossing their ways in the foreground of the stars and galaxies that Hubble was observing. The image combines observations obtained on November 16, 2012, with Hubble’s ACS instrument using two different filters (606 nm, shown in blue, and 814 nm, shown in red). As the asteroids moved relative to Hubble during the observation, both trails have been imaged subsequently in each filter and thus appear part red and part blue.

The two asteroids are located at different distances from us, so they did not actually collide as their intersecting streaks might suggest. They were uncovered by citizen scientists Sovan Acharya, Graeme Aitken, Claude Cornen, Abe Hoekstra, and Edmund Perozzi, some of the volunteers who have been inspecting images from the iconic space telescope in a search for rocky interlopers as part of the Hubble Asteroid Hunter citizen science project. Launched one year ago on International Asteroid Day 2019, the Hubble Asteroid Hunter is a collaboration between ESA and the Zooniverse, inviting members of the public to identify asteroids that had been serendipitously observed by the Hubble Space Telescope.

Volunteers from all over the world have provided 2 million classifications of 140,000 composite Hubble images

Since then, 9000 volunteers from all over the world have provided 2 million classifications of 140,000 composite Hubble images, finding 1,500 asteroid trails — about one every hundred images. In the project’s first phase, volunteers could explore a collection of archival Hubble images where calculations by the Solar System Objects pipeline of ESASky, ESA’s discovery portal for astronomy, indicated that an asteroid might have been crossing the space telescope’s field of view at the time of the observations. The sheer number and enthusiasm of volunteers led the team to expand the project, including more images of the sky collected by Hubble over the years.

Besides asteroids, the volunteers have also identified trails left by satellites in orbits higher than Hubble’s, intriguing instances of gravitational lensing, and ring-shaped features that arise when galaxies collide. The project experienced a surge in participation during the past few months, as many people around the world were staying at home due to the COVID-19 pandemic, leading to a threefold increase in the number of classifications. Thanks to the continued efforts of the volunteers, this citizen science project is now nearing completion, with only the infrared images left to explore.