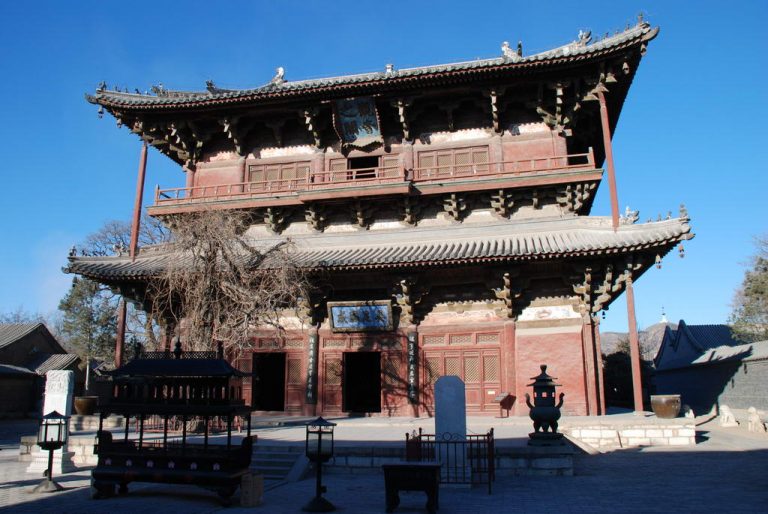 The Guanyin Pavilion of the Dule Temple. (Image: danmairen via Wikimedia Commons)

One of China’s oldest heritage sites is situated in a small town called Jixian more than a hundred kilometers from Tianjin City. The Dule Temple, roughly translated as “Solitary Joy Temple,” claims to be the oldest timber structure in Asia.

This ancient Buddhist temple is more than a thousand years old and holds substantial architectural and historical significance. In fact, the temple underwent a massive restoration undertaken by the Chinese government that started in 1990 and was completed in eight years. This was the most extensive restoration that the temple had undergone in its entire history.

Ancient construction of the Dule Temple

Believed to be constructed way back in the time of the Tang Dynasty by Emperor Xuaxong, the Dule Temple is an architectural delight, to say the least. What’s amazing is it continues to echo the grandeur and brilliance of its time.

There are only speculations about how the Dule Temple got its name. While some believe it was named after a powerful military general known popularly as An Dule, others say the temple takes its name from a river of the same name flowing north of the temple.

Structurally, the temple has four sections. You have the front gate, the Central Pavilion, or Guanyin, and then there are the west and east hall structures. The front gate structure is comprised of a single eave ceiling, which is believed to be the oldest of its kind in Chinese architecture. The entrance has two statues guarding it — they are called Heng and Ha.

The front gate has a height of around 10 meters. The Chinese characters “du le si,” which means “Dule Temple,” are inscribed on a board over the gate. The gate is adorned with tile ornaments that reflect simplicity.

The Guanyin Pavilion is an amazing specimen of architectural brilliance, peerless craftsmanship and culture melded perfectly. You would find it particularly special if you’re someone who’s interested in antique woodworks and ancient architecture.

The pavilion structure has survived at least 28 major earthquakes, which is nothing short of an architectural miracle when you are talking about timber-framed structures anywhere in the world. It was built completely by local artisans making use of the indigenous curving technology known as “dougong.” In this technique, no nails or rivets are used. Dougong makes use of interlocking wooden brackets.

The pavilion is the oldest as well as the tallest existing structure of its kind in China. It has five single-eave roofs and upwards of a thousand individually set-pieces There is a board placed under the lower eaves of the pavilion with the inscription “ju zu yuan cheng,” which means “complete and mature.” Aside from the aesthetic value of the pavilion, it’s primary function is to house the centerpiece of the temple — the Goddess Avalokitesvara. Standing 16 meters tall, the colored clay statue of the Goddess is the largest of its kind in Asia.

The name “Avalokitesvara” means “eleven-sided Bodhisattva.” The statue is one of the most beautifully colored clay statues in China. Upon entering the pavilion, you notice the walls covered with intricately crafted murals that show various Buddhist icons. The temple provides a unique ambiance that can only be described as soul-body synchronizing. You can find yourself getting immersed in a state of impenetrable calm.

The historical and cultural value of such a structure that has withstood the test of time for over a millennium cannot be measured. It stands testament to the changing values and priorities of our species as a whole.