The Vanity of Humans: Caravaggio’s Narcissus 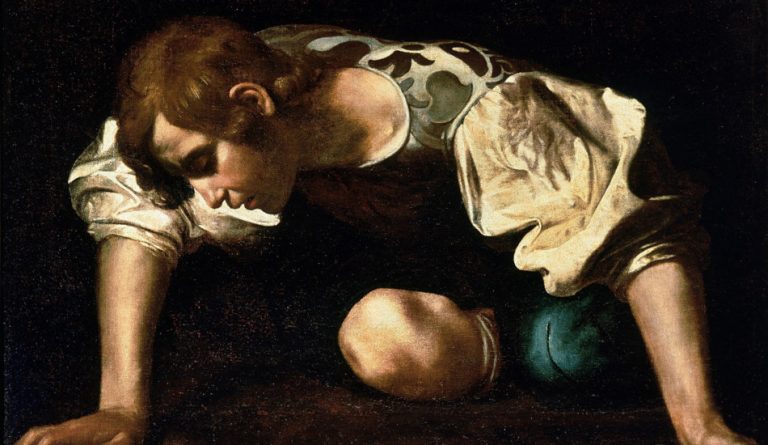 At a time when it seems that more and more people hold to a grandiose view of themselves, we would do well to look into how the trend originated. Maybe we can take a lesson from history by examining the first man afflicted with self-love, a certain Greek mythological figure named Narcissus, who is eloquently captured in Caravaggio’s Narcissus painting.

Cursed to fall in love

According to Ovid’s Metamorphoses, Narcissus was the son of the nymph Liriope and the river god Cephissus. He was a hunter — a very good-looking hunter who had unintentionally gained many admirers. But despite all the praise and admiration he received, the handsome man mocked their compliments. Inside his beautiful self, he hid an intense pride that shunned affection. Maybe, from his point of view, no one was worthy of his love.

One day, while Narcissus was hunting in the woods, Echo, the Oread nymph, spotted the young man and instantly fell in love with him. She tried to hug him, but to her dismay, she was treated just like the others and pushed away with utter scorn. Hurt by this, Echo roamed the forest until her death, with only the sound of an echo remaining afterward. Nemesis, the goddess of divine retribution, found out about Echo’s demise and proceeded to punish Narcissus’ arrogance.

This was the curse: Narcissus, after seeing a reflection of himself in a pool, fell in love with himself. Though he was oblivious to his reflection in the beginning, he soon realized it. Stricken with despair, he ended his life. There are various versions of Narcissus’ story, but all of them depict him as falling madly in love with himself, and thus, the creation of the word narcissistic.

Caravaggio perfectly illustrated Ovid’s version of the story through his painting. The subject of the painting, Narcissus, is distinctive because of the extreme use of light and dark. The man stands out, almost as if he’s radiant, while the dark shades of the background contrast his lovely form. Does the darkness in the background mean Narcissus’ rejection of the world in favor of centralizing his world around his own image? Or is it about the ordeal that’s about to befall him because of his overt and extreme self-love? Artist Eric Bess sees it as both.

He explains that Narcissus’ thirst for himself made him forget everything around him. Because of his desire to love himself, he turned ignorant of other living beings and was numbed by the uncontrollable sensation of even feeling compassion. This lack of compassion that caged him inside his own world is represented by the darkness. The shadowy shades in the background were drawing near, attracted by the nature of his desire. Eventually, this yearning led to his demise.

Caravaggio’s Narcissus painting’s composition is divided into two aspects: Narcissus occupying the top and his reflection in the bottom. While it is impossible for the man and his reflection to actually interact, Caravaggio communicates the connection by having the man’s left hand join his reflection’s, creating an oval shape with his mirror image.

Bess perceives this oval shape as the divine retribution inflicted by the goddess Nemesis. Narcissus treated his reflection with great admiration, even to the point of obsession. But much like his treatment of the young women who offered their love, his reflection, not even a living being, returned his feelings with nothing but coldness. It was a fitting reversal of the situation. As Eric Bess put it: “What goes around comes around.” (The Epoch Times)

Some experts claim that narcissism is spreading, especially among the youth around the world. Professor of Psychology Jean Twenge at San Diego University, and author of the book The Narcissism Epidemic, argued that narcissism is increasing among young adults.

Too much self-glory and vanity are a thing nowadays. Thinking about it should sound warning bells and remind us of Narcissus’ obsession and his pitiful end.