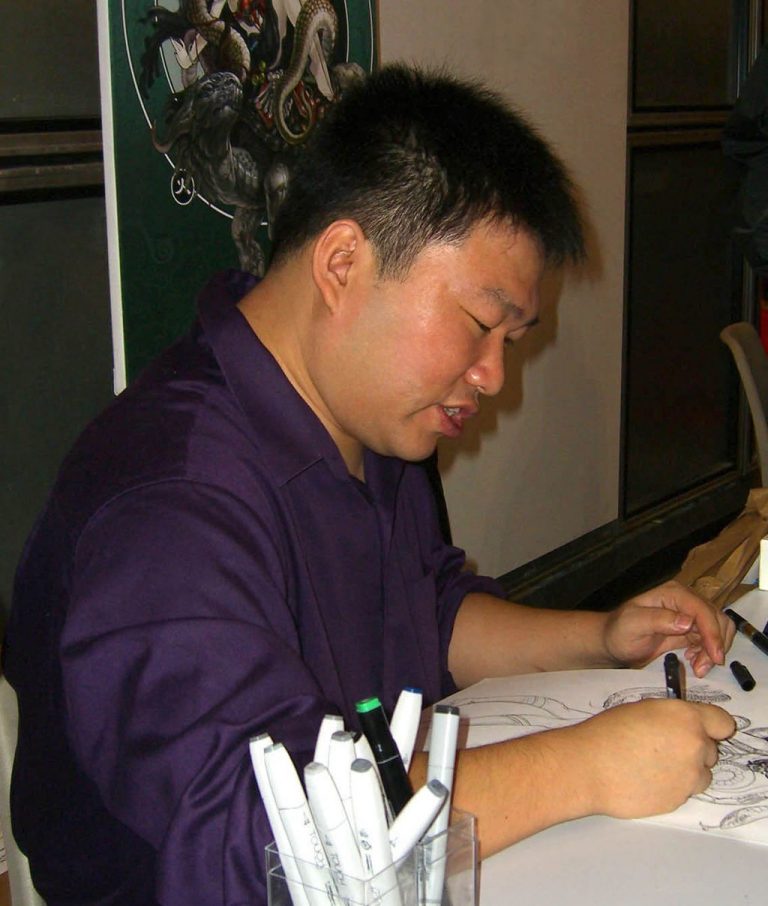 Known as the “King of Chinese Animation,” the cartoonist known as Daxiong, whose real name is Guo Jingxiong, recently joined in collaboration with Canadian realist figure sculptor Ben Li to create a 3-meter high painting and sculpture to support the anti-extradition protest movement in Hong Kong and the Hong Kong protesters. This artistic partnership is intended to remind people not to forget this historical moment in the struggle of Hong Kong’s people. In an exclusive interview, Daxiong and Ben Li related the original intention of their creation and their views on the Hong Kong people’s anti-extradition movement.

Daxiong has been anxiously following the events in Hong Kong since June 2019 and collaborated with the media on ” Look at China” in creating a number of posters on the theme of Hong Kong’s anti-extradition protest movement. At the end of 2019, he drew a huge 3-meter painting to record this historical moment in support of the Hong Kong protesters.

He told the media that the young people participating in Hong Kong’s anti-extradition protest inspired and moved him very much. Due to political and geographical factors, Hong Kong now stands at the forefront of the “tiger’s mouth.” The risks faced by the people for resisting the tyranny of the Chinese Communist Party (CCP) are great and the challenges and pressures faced are also intense. However, the people of Hong Kong are awakening and there is no turning back.  “We are touched by their courage and have to support them.”

He also told reporters that in this anti-extradition protest movement, he realized that the younger generation is rejecting the CCP and they clearly see the true colors of the Chinese Communist Party. “The CCP never honored their promises on the ‘One Country Two Systems’ for Hong Kong. Instead, they used the system to deceive the people of Hong Kong, deceive the people of Taiwan, and deceive the whole world. The CCP always resorts to lies and violence. Today, more and more people around the world are seeing the CCP’s true colors.”

He believes that it is actually the Chinese people who are suffering in mainland China. Those who believe in the CCP are the ones who have suffered terribly. The sooner they awaken, the sooner they can see a bright future for themselves.

Daxiong hopes that through his works he can awaken people’s righteousness and conscience and also let the people of Hong Kong know that there are many awakened Chinese in the world who will stand up with them to oust the CCP. It is going to be a big celestial phenomenon. All human beings are in it. “Choosing to eliminate the CCP is choosing a better future for oneself.”

Ben Li said that the sculpture created for the anti-extradition protest movement is just the beginning of his creations. He hopes to record all events related to justice in the world in the form of sculptures. “I think this kind of thing should be created for justice, forever.”