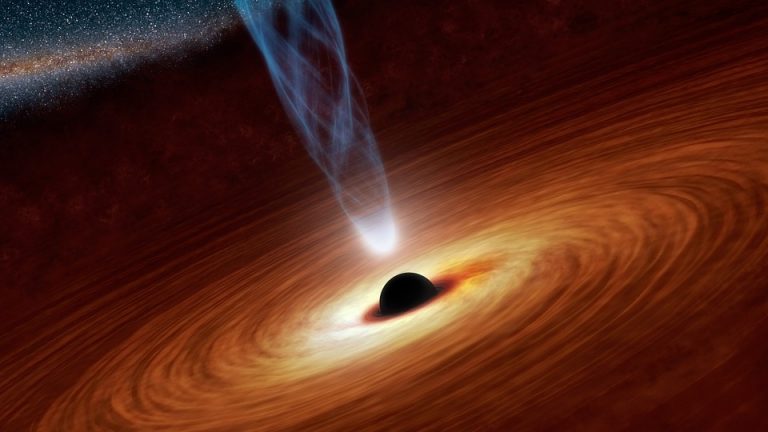 Very recently, the IceCube Neutrino Observatory reported another excess of high-energy neutrinos in the direction of one of the brightest active galaxies, known as NGC 1068, in the northern sky. (Image: 12019 via Pixabay)

The origin of high-energy cosmic neutrinos observed by the IceCube Neutrino Observatory, whose detector is buried deep in the Antarctic ice, is an enigma that has perplexed physicists and astronomers. A new model could help explain the unexpectedly large flux of some of these neutrinos inferred by recent neutrino and gamma-ray data. A paper by Penn State researchers describing the model, which points to the supermassive black holes found at the cores of active galaxies as the sources of these mysterious neutrinos, appears in the journal Physical Review Letters.

Kohta Murase, assistant professor of physics and of astronomy and astrophysics at Penn State and a member of Center for Multimessenger Astrophysics in the Institute for Gravitation and the Cosmos (IGC), who led the research, said:

“Neutrinos are subatomic particles so tiny that their mass is nearly zero and they rarely interact with other matter. High-energy cosmic neutrinos are created by energetic cosmic-ray accelerators in the universe, which may be extreme astrophysical objects such as black holes and neutron stars. They must be accompanied by gamma rays or electromagnetic waves at lower energies, and even sometimes gravitational waves.

“So, we expect the levels of these various ‘cosmic messengers’ that we observe to be related. Interestingly, the IceCube data have indicated an excess emission of neutrinos with energies below 100 teraelectron volt (TeV), compared to the level of corresponding high-energy gamma rays seen by the Fermi Gamma-ray Space Telescope.”

Scientists combine information from all of these cosmic messengers to learn about events in the universe and to reconstruct its evolution in the burgeoning field of “multimessenger astrophysics.” For extreme cosmic events, like massive stellar explosions and jets from supermassive black holes, that create neutrinos, this approach has helped astronomers pinpoint the distant sources and each additional messenger provides additional clues about the details of the phenomena. For cosmic neutrinos above 100 TeV, previous research by the Penn State group showed that it is possible to have concordance with high-energy gamma rays and ultra-high-energy cosmic rays that fits with a multimessenger picture.

However, there is growing evidence for an excess of neutrinos below 100 TeV that cannot simply be explained. Very recently, the IceCube Neutrino Observatory reported another excess of high-energy neutrinos in the direction of one of the brightest active galaxies, known as NGC 1068, in the northern sky. Murase said:

“We know that the sources of high-energy neutrinos must also create gamma rays, so the question is: Where are these missing gamma rays? The sources are somehow hidden from our view in high-energy gamma rays, and the energy budget of neutrinos released into the universe is surprisingly large. The best candidates for this type of source have dense environments, where gamma rays would be blocked by their interactions with radiation and matter but neutrinos can readily escape. Our new model shows that supermassive black hole systems are promising sites and the model can explain the neutrinos below 100 TeV with modest energetics requirements.”

The corona of supermassive black holes

This corona is extremely hot (with a temperature of about one billion degrees kelvin), magnetized, and turbulent. In this environment, particles can be accelerated, which leads to particle collisions that would create neutrinos and gamma rays, but the environment is dense enough to prevent the escape of high-energy gamma rays. Murase said:

“The model also predicts electromagnetic counterparts of the neutrino sources in ‘soft’ gamma-rays instead of high-energy gamma rays. High-energy gamma rays would be blocked but this is not the end of the story. They would eventually be cascaded down to lower energies and released as ‘soft’ gamma rays in the megaelectron volt range, but most of the existing gamma-ray detectors, like the Fermi Gamma-ray Space Telescope, are not tuned to detect them.”

There are projects under development that are designed specifically to explore such soft gamma-ray emission from space. Furthermore, upcoming and next-generation neutrino detectors, KM3Net in the Mediterranean Sea and IceCube-Gen2 in Antarctica will be more sensitive to the sources. The promising targets include NGC 1068 in the northern sky, for which the excess neutrino emission was reported, and several of the brightest active galaxies in the southern sky. Murase said:

“These new gamma-ray and neutrino detectors will enable deeper searches for multimessenger emission from supermassive black hole coronae. This will make it possible to critically examine if these sources are responsible for the large flux of mid-energy level neutrinos observed by IceCube as our model predicts.”

Provided by: Sam Sholtis, Pennsylvania State University  [Note: Materials may be edited for content and length.]